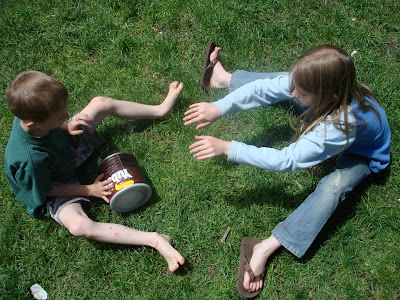 From Crater Lake we drove over to Diamond Lake. Finishing off the trip with Tin Can Ice Cream.
Here is the recipe. 1 cup milk, 1 cup whipping cream, vanilla and 1/2 cup sugar. Put that all in a 1 pound coffee can and close it up with a lid. Then put the small can into a 3 pound coffee can and add ice and rock salt all around the inside of the large can. Seal it up with a lid and roll. You will need to stop it now and then to pour off the water and add more ice and rock salt. Roll it on the ground until it freezes up and becomes ice cream. You can add other flavors or chocolate chips or fruit if you want. We had ours with fresh picked strawberries from my garden.
Posted by Vicki at 10:25 PM 1 comment: 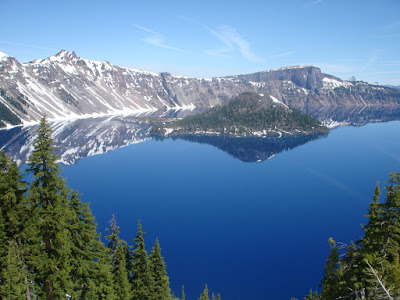 Valley of the Rouge campground didn't have much to do, so we packed it all up and drove over to Crater Lake...it was a beautiful sunny day to see it. 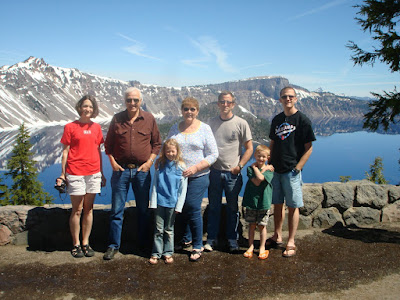 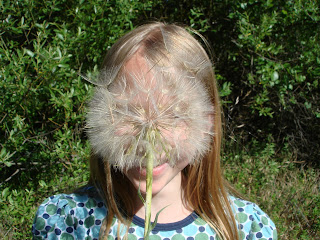 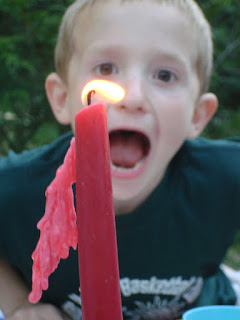 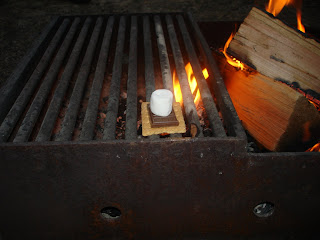 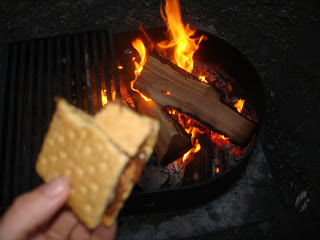 We had some unexpected visitors each day... 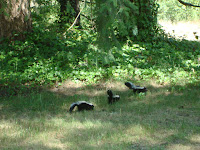 a skunk family of 6 babies. They just wandered around our campsites.

Camping is easy when you have all this help.

Joshua getting the firewood split up.

The guys getting the fire going. 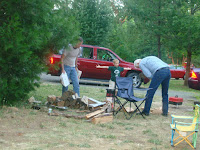 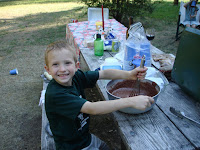 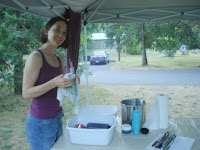 Rachel said she LOVES to wash dishes while camping. 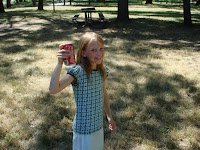 Emily made sure the Coke was cold enough.

That left Dad and me to finish off the wine. 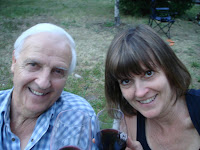 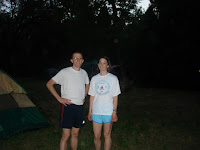 John and Rachel went for a run. 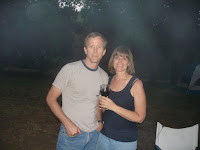 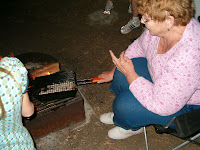 Great Grandma demonstrated how popcorn was done before microwaves.
... 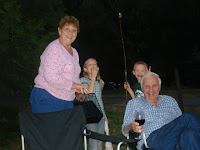 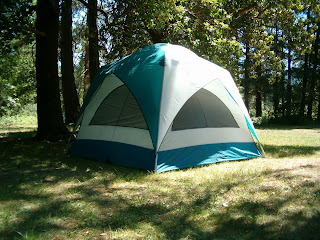 Well, I never thought I would ever say this, but I think I will take camping, at least the sleeping on the hard ground with no padding but your sleeping bag, off my favorite things to do list. It has been a long time since I was camping, like YEARS...I still like camping, especially the cooking part of it, but I don't remember it being so uncomfortable to sleep. Just when did the ground get so hard? 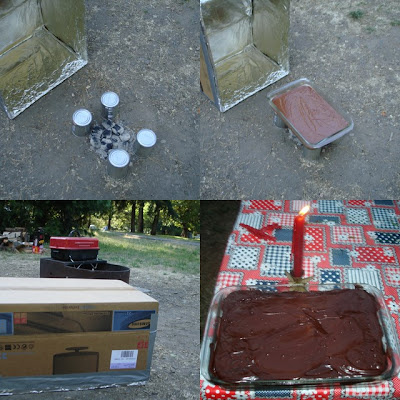 Box Oven Cake, otherwise known as Camp Cake
When I first heard this one, I just knew it would be impossible. Bake a cake in a cardboard box? No way! But it is so fun. All you have to do is line a box with foil, then you need four cans to place a baking rack on. Mix up the cake and set it on the rack to bake. Each coal is 40 degrees of cooking heat, so you need 9 hot coals to bake that cake for 30 minutes. Don't peek more than once or it will mess up the temperature in the box. Trust it, it really works. (Oh, and if you try it, don't do like I did in the picture above, make sure your whole cake is over the coals and not on the cans. This time the cake took way longer to bake in those places and the center was a little bit burnt. ) 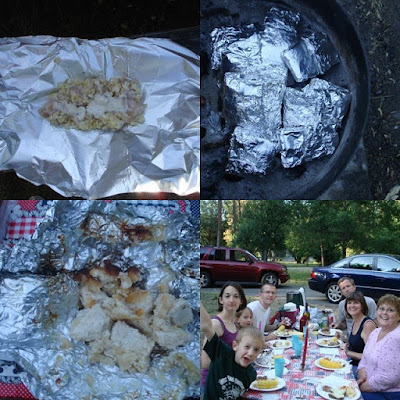 Camp Chicken Nuggets
I learned to make these when I was a Girlscout leader at day camp one summer. They really do not look very appetizing, but in spite of how they look, they are fantastic when you are out camping. It is such an easy thing to make, too. First you take chicken that is cut up into bite sized pieces, dip it in ranch dressing (made from the package, not the bottle), then you roll the dipped pieces into crushed potato chips. Wrap up in individual packages and bake over coals for about 20-30 minutes, turning the packets every 10 minutes or so. I know, it sounds disgusting and watching somebody make it is even worse, but you will be amazed at how good it tastes. The salt on the chips makes the perfect seasoning. I like to bake potatoes alongside of the chicken and there you have an awesome dinner out camping.
Posted by Vicki at 8:47 PM No comments: 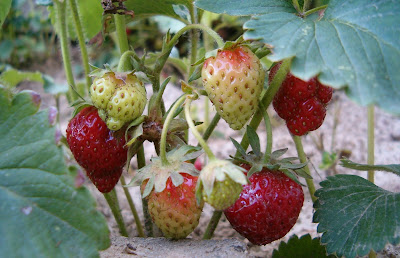 In spite of the unusually cold weather...the strawberries have made their appearance! 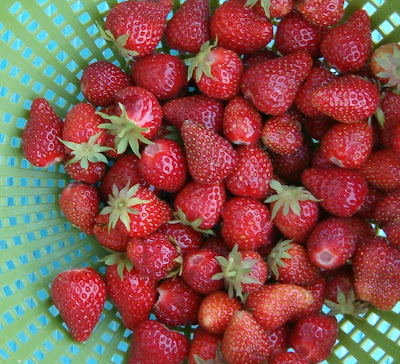 I was called to help out in Casework for a huge apartment fire that happened late Thursday night. Check out this picture! We helped 9 families with temporary shelter, food and clothing. One family was out of the country on vacation, can you imagine coming home from a vacation to THAT? One was in the hospital (unrelated to the fire) and one unit destroyed was vacant. The other 6 families did not want assistance.

BEAVERTON -- A three-alarm fire tore through an apartment building early this morning, displacing about 40 residents and killing a dog.

Investigators were examining whether a discarded cigarette caused the fire after a resident calling 9-1-1 said that might have started the flames he saw from his back deck, said Walt Peck, a Tualatin Valley Fire & Rescue spokesman.

The blaze damaged 18 units, and Peck said it was "amazing" that no resident was hurt given the amount of fire and height of the flames.

"This was a pretty spectacular fire," he said.

Vigilant police officers, working smoke alarms and a fortified firewall helped prevent injuries and more extensive damage, officials said. However, the apartments were built before sprinklers were required in 1999 in such residential buildings, which would have prevented much of the damage, Peck said.

The fire began shortly before 1:30 a.m. when Hillsboro police -- in the area during a slow night -- responded to the Birch Pointe Apartments at 1770 N.W. Cornell Road, Peck said. When officers arrived, they saw flames shooting from one of the buildings.

Firefighters from Tualatin Valley Fire & Rescue and the Hillsboro Fire Department arrived within 4½ minutes of the 9-1-1 call, Peck said.

Lt. Ronnie Mason's crew from Station 64 was the first to respond. As they pulled out of the station on Northwest 185th Avenue north of U.S. 26, they could see the flames more than a half-mile away. Mason called for a second alarm even before he got to the fire.

About 80 firefighters controlled the fire in 40 minutes.

Rebecca Lester said she heard pounding on the door of her apartment and saw the reflection of emergency lights.

Then she heard someone yell, "Get out! The building's on fire!"

She woke her 13-year-old son and 7-year-old daughter, then fled from their second-floor apartment.

"It was the most frightening thing I have ever seen," she said. "It was this huge roar. There was popping and cracking and embers flying everywhere."

Mike Hull, who lived in the second-most damaged unit, was at work in Milwaukie when the fire started. He retrieved a few soot-covered belongings from his apartment Friday morning, but said there wasn't much left. "It's totally gutted," Hull said.

Hull, 55, fought back tears as he talked about his beagle, Bailey, who died in the fire. (I assisted this man...I could not keep back the tears when he told me how he and his son had just returned from burying his dog on Mt. Hood where the dog loved to play. )

"I'm glad everybody got out. Thank God the humans got out, for sure," he said.

Hull said he can live with his son until he finds something permanent.

"At least I have a better opportunity than some of the folks," he said.

Residents of five units can return to the apartments, and tenants in five others are staying with family or friends, McCann said. The resident of the final damaged unit was in the hospital for unrelated reasons, he said.

Lester said Birch Pointe managers found her another apartment there because her son has special needs and wouldn't do well in a shelter. Firefighters told Lester that her apartment had light water damage.

-- David Austin of The Oregonian staff contributed to this report. 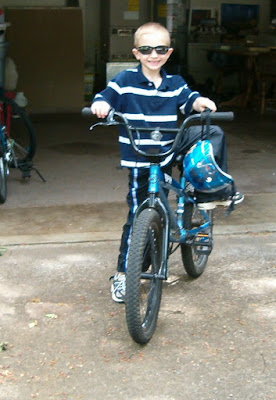 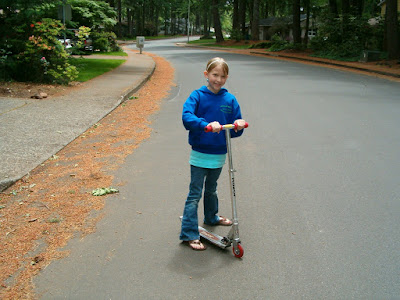 Yesterday was the first day out of school. So I went to celebrate with the grandkids. 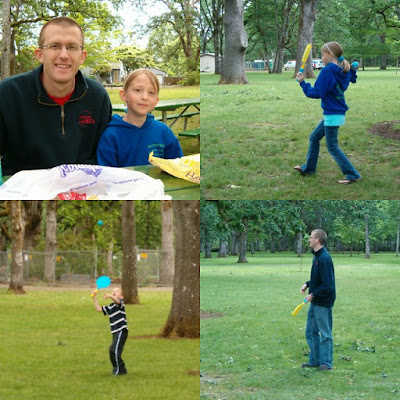 First we went shopping, then picked their Dad up from work and had lunch in the park, then took him back to work and once we got back home, 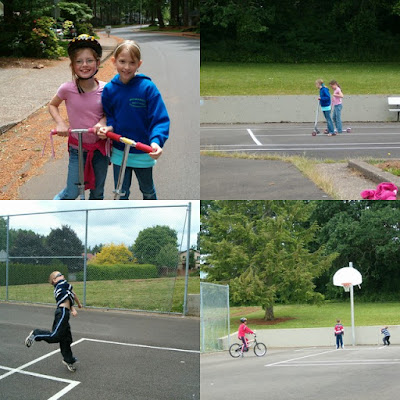 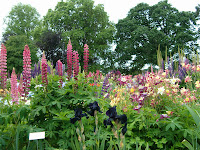 Well, as you know the Iris Gardens really impressed me and I was so inspired, I set right to work on my own gardens at home. 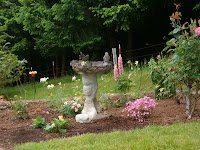 Kinda looks the same, right? OK, so it has a long way to go!

a snail is cute...but a slug is yucky?

Is it just because one carries his own cute little house on its back? I guess we would say the same thing about a turtle, too, huh?
Posted by Vicki at 8:39 PM 1 comment: