I turned the page on September already! 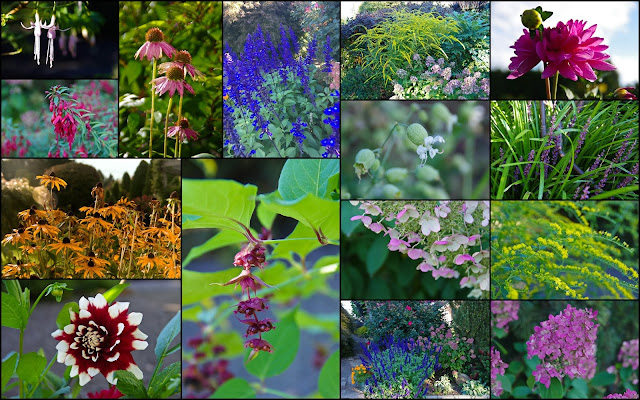 There are still a few flowers in the yard.  Some are hanging on until the last, but slowly they have changed color and I have had to cut them down.  The yard is almost ready for winter now.  Pretty soon, I will turn off the water and be sealed up and ready for the freezing weather. 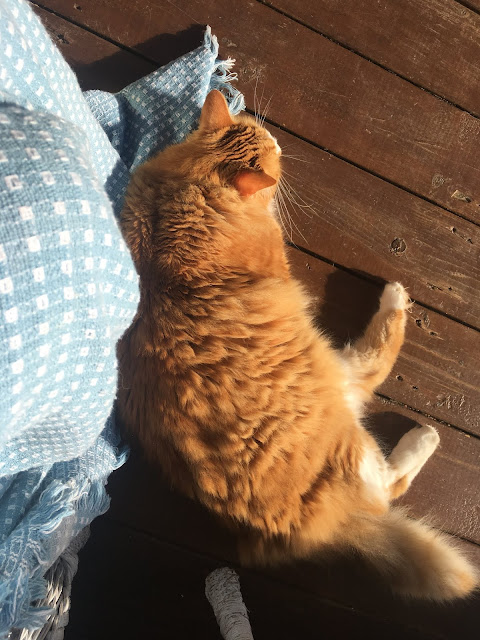 But for now, I am holding on to the last few days when I can sit on my little porch with Bazzel and watch the sunrise in the mornings.  He sits at my feet until I go inside, then he takes over my nice warm chair. 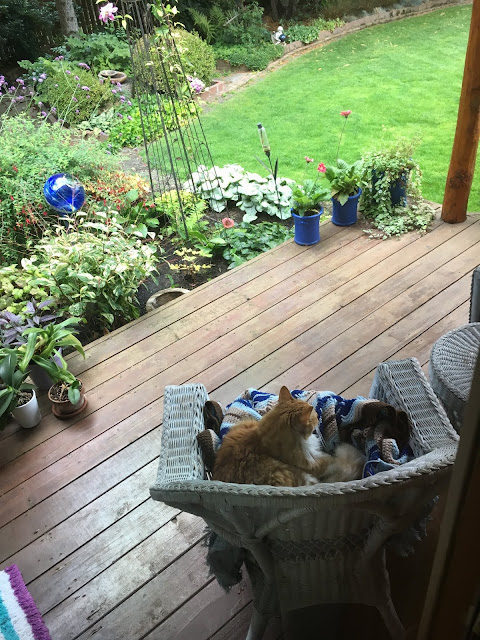 Or I sit under the covered part of the back deck and watch the first much needed rains that we have had in weeks. 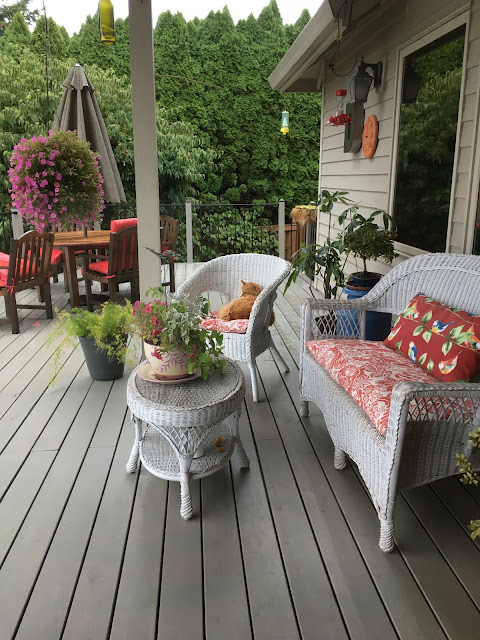 or enjoying days of just wandering the yard, saying goodbye for now to the flowers and taking a few photos, 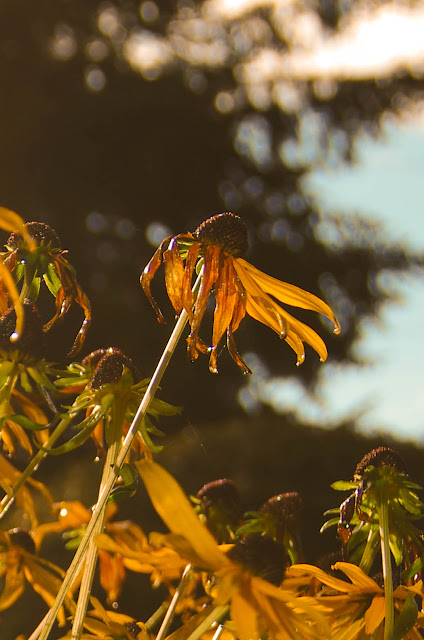 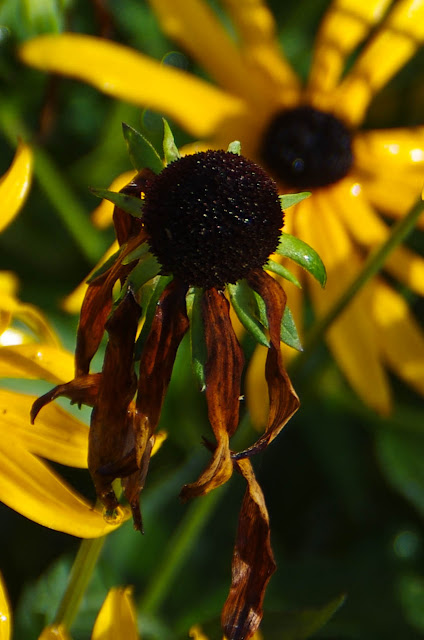 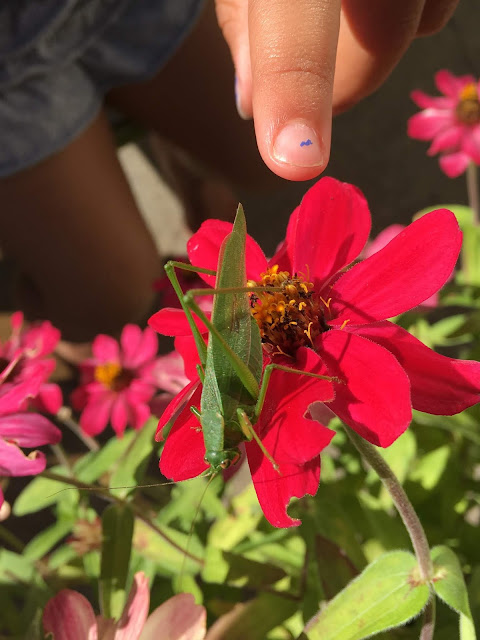 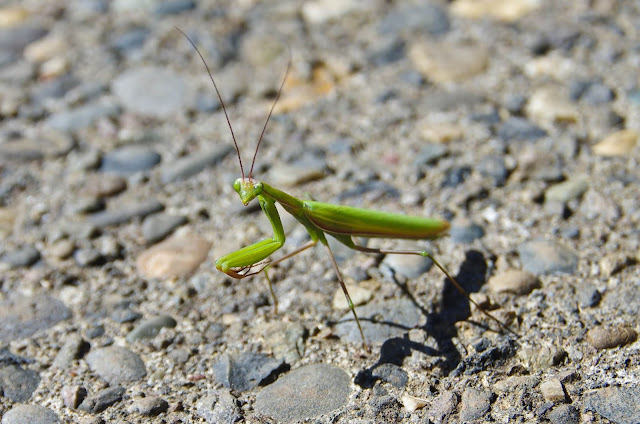 and spiders building their final webs. 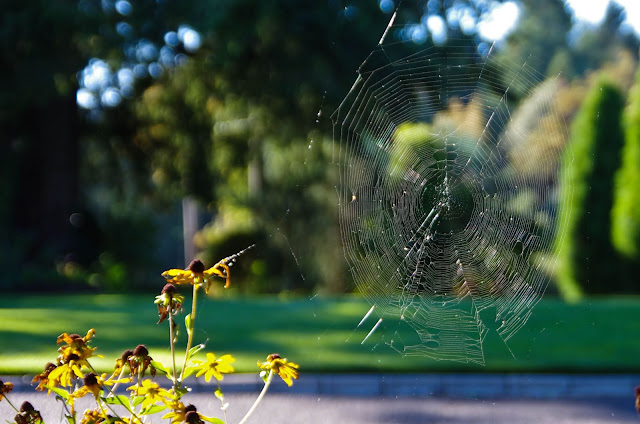 The mountain was almost bare by the first of the month, but finally received a little dusting of snow.  It is already melted back off, but it was nice to see the snow again. 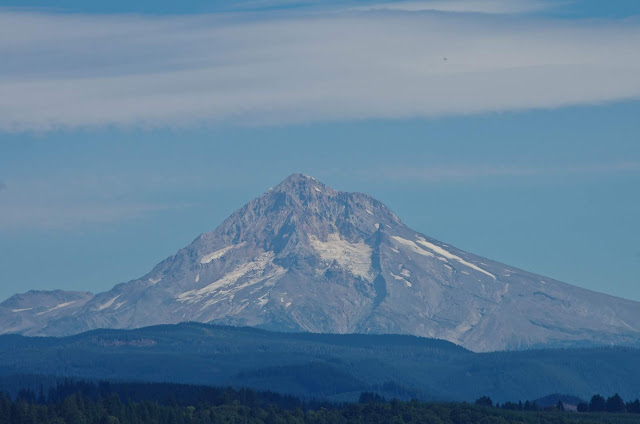 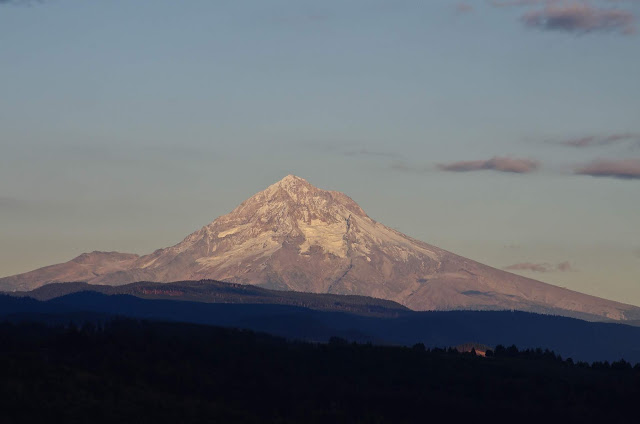 Fall flowers have mostly gone and the leaves are beginning to turn color.  Along with fall color, is fall harvest. Sounds bigger than it really was, but it is fun to pick things that grew in my yard.  The apples in my yard are so good this year, I had to share a few of them with some critters, but mostly I had them for myself.  Wally gave me some grapes and plums and my own little grape arbor had some pretty nice grapes this year too. 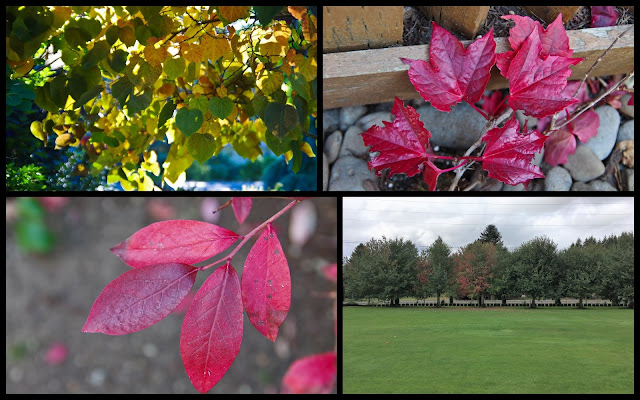 In the bottom right photo, can you see how only one tree in the line has started changing?  Funny how it reminds me of how some people are always rushing to get on with it. 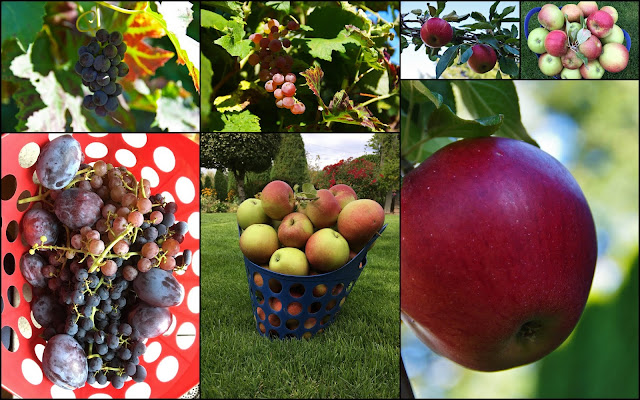 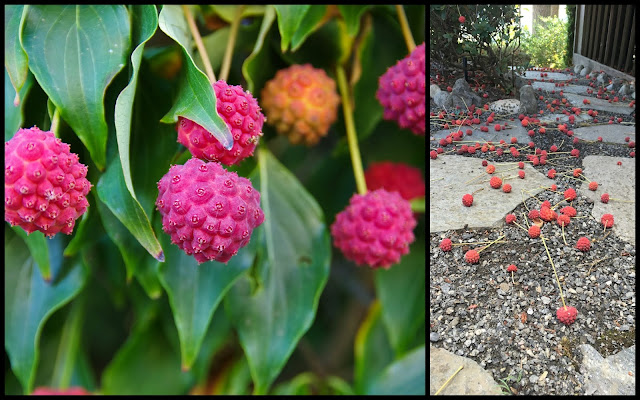 The apple tree was in the process of being trained when we moved in here.  I wasn't sure how to continue with that, so have just kinda bumbled  through the pruning each fall.  This year, I read up on it and got really brave and trimmed the branches way back.  Here's hoping I didn't kill it off! 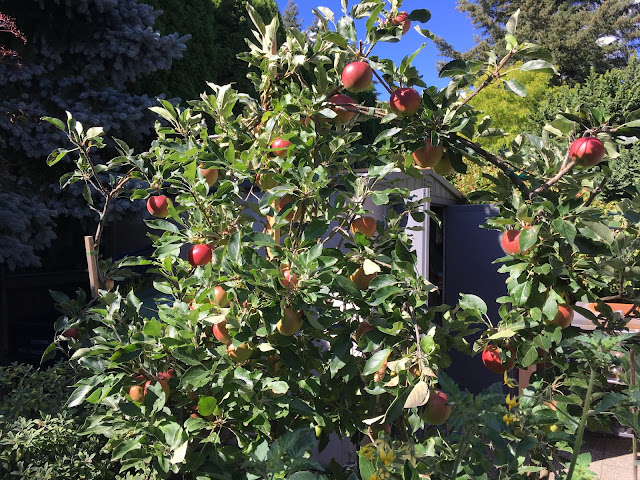 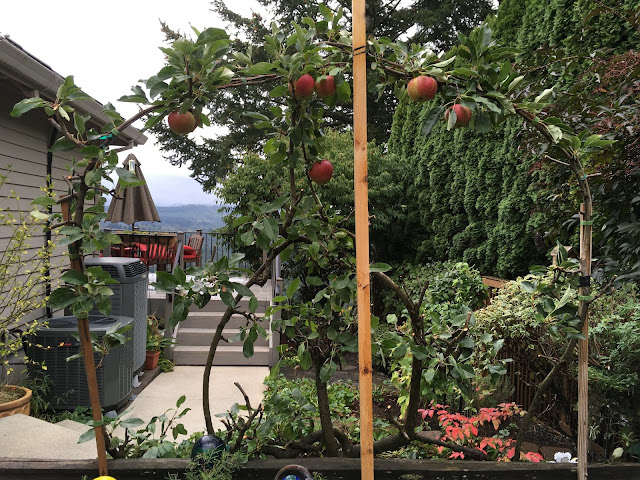 The first weekend of the month, we met up with John and Rachel and Josh at Ankeny Vineyard in Salem.  They had given us a giftcard for Christmas.  Jessi and Ariel and the kids went too.  We had some awesome wood fired pizza and tested the wine.  It was a beautiful fall day for enjoying it all.  The grapes were overloaded on the vines.  We also went to a brewery and watched the hop trucks delivering the hops. 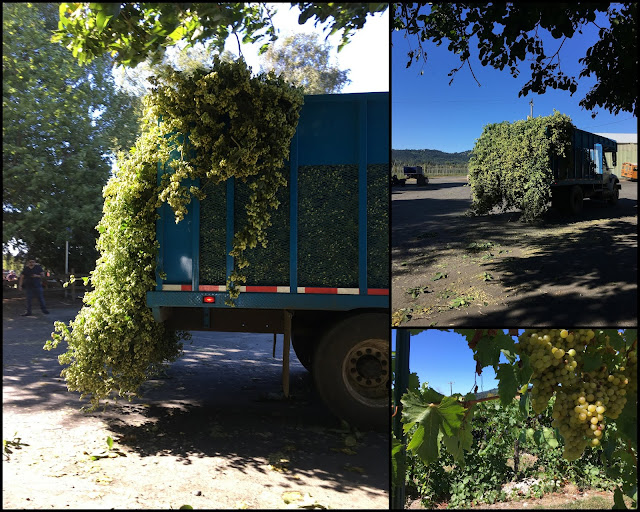 The first of the month meant back to school for the grandkids.  Here are their first day of school shots that their parents sent me. 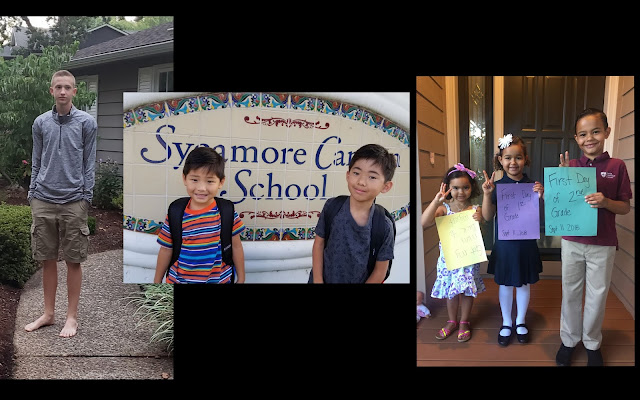 We had a sleepover with the Josiah, Arianna, and Lina.  They helped me watch the sunrise, did beauty school on the 'dog' and ate the last of the summer popsicles. 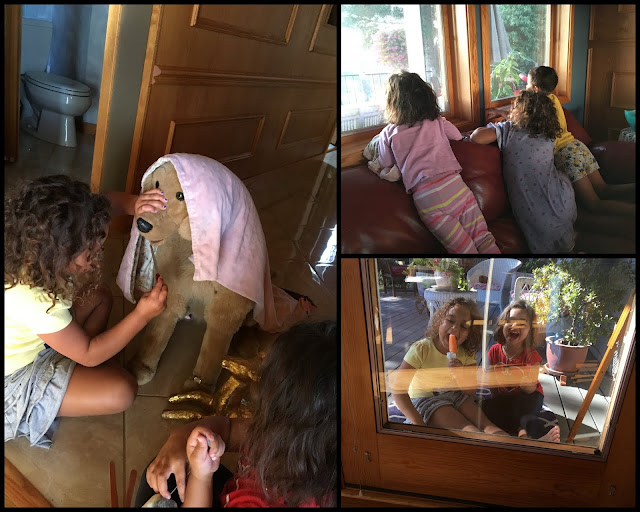 Arianna just has a way to improve things.  She is never afraid to let you know she has a better idea.  Here is her idea of how my entry table should look.  She added things from all the other rooms. She was so quiet and occupied. And proud of herself for it.  It makes me laugh. 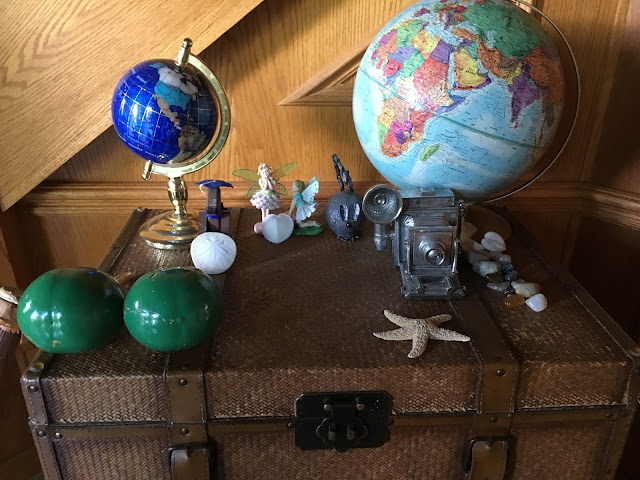 Once again it was time to have our McCool Girl Day at Ruby's Spa.  Our birthday/Mother's Day gift to each other.  Soaking in the saltwater pool, massages, lunch. 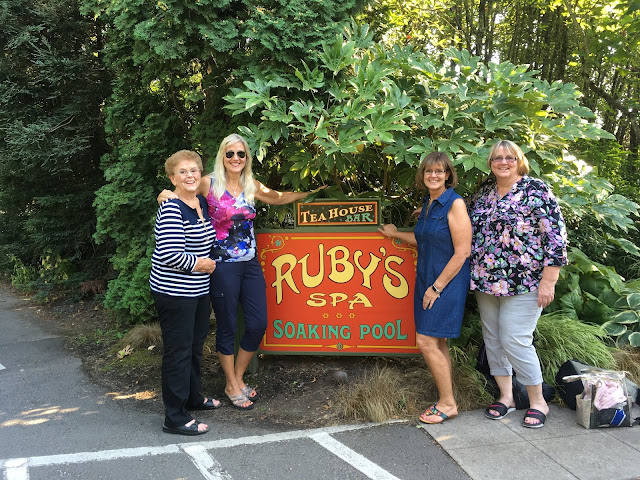 The last Saturday of the month we saw Joshua run a cross country meet here in Portland. He is breaking his times and doing so awesome this year! 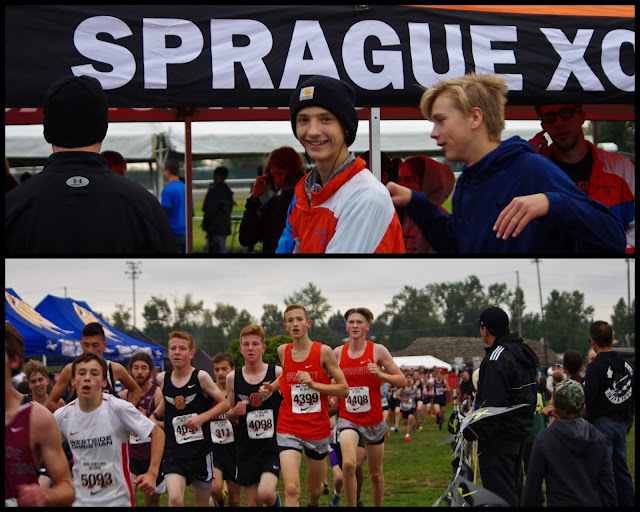 Here are a few more shots of the mountain of September. 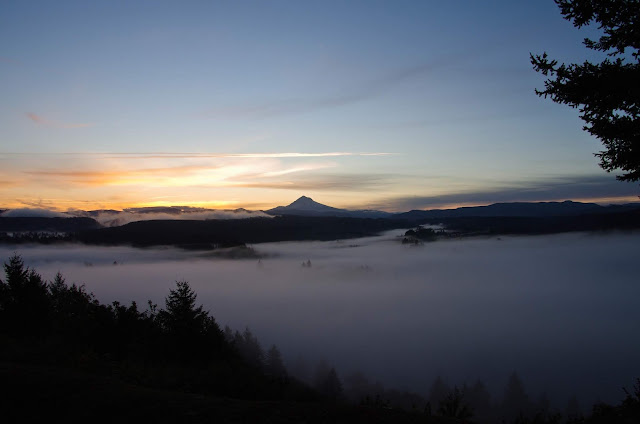 Morning fog is rising from the canyon again and cloudy skies make for awesome sunrises. 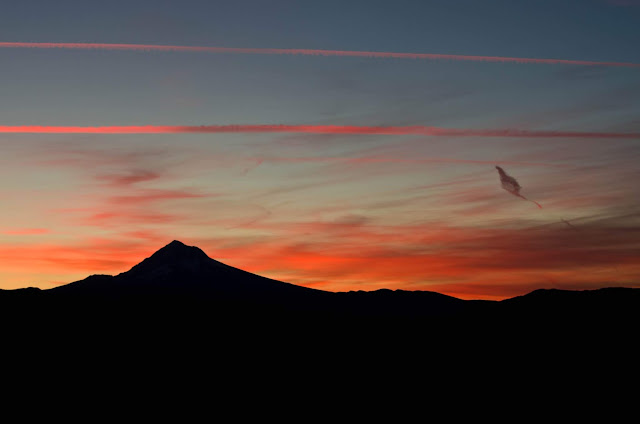 Alpine glow as the sunsets. 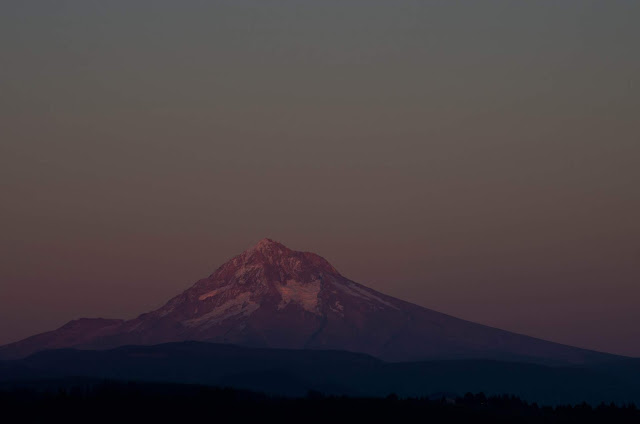 I have seen the shadow before as the sunrises right behind the mountain, but this day it was extra vivid. 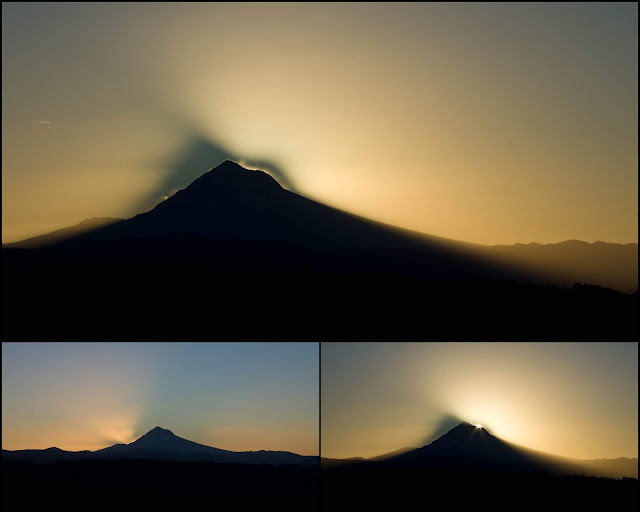 and then there was the super moon rising. 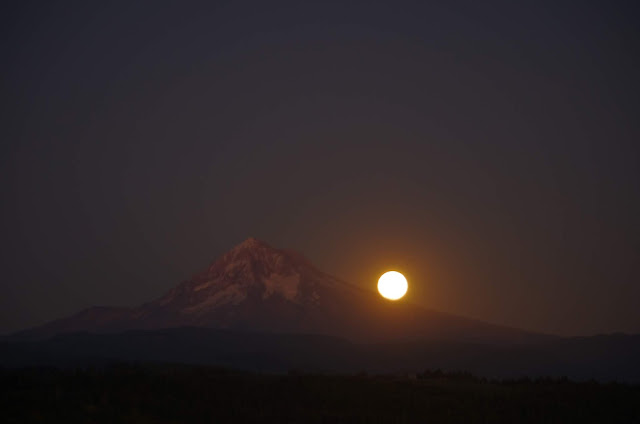