In the last three months, all three of my kids have had to deal with something I hope they don't have to go through again.  Cancer scares.  It was enough that I had to consider it three years ago with my own cancer.  And if I had my way, it would ONLY be me going through it and never them again.  Anything not to have to see your kid hurting.  First it was John who had a lump.  He finally had it looked at and the doctor said to watch it, but at the moment it was not cancer.  Such a relief!
Then Jessi.  She had her mammogram and was told she needed to come back for more images.  She was also warned that they would be taking extra images and if needed sending her in for ultrasound, which they did do. Ugh!  But once again, results were NO cancer. 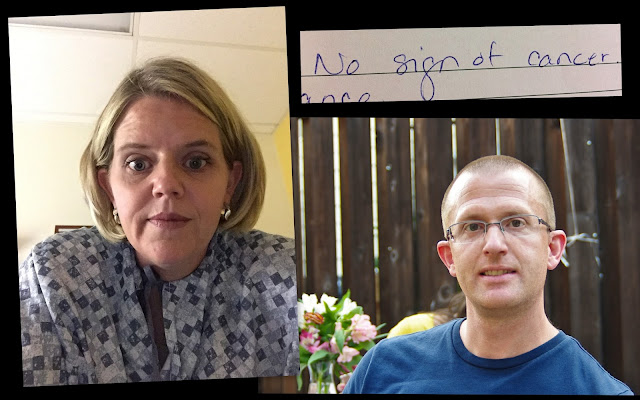 But right there in the middle of this with those two, Dennis was at his doctor and the doctor noticed he had a lump on the side of his neck.  He said it was his thyroid and there was a tumor.   The tumor was really big, especially if you are the Mom of the person who has the tumor. He was having trouble breathing and swallowing and coughing a lot . A biopsy was done and it came back inconclusive.   So cancer or not, he still needed the tumor removed. Surgery was scheduled to remove half of it.  The doctor wanted to leave half of it, in hopes that the remaining half would take over and Dennis would not need hormone replacement.  If the results came back as cancerous, then the plan was that at a later date, they have to go back in and remove the rest.
Well, we are rejoicing that for the third time, we were given the NO CANCER results!
I am so very thankful that the results are clear, that my kids are well.  I know that even if God had  allowed one or all three of them to endure a cancer diagnosis, that each of them would have held on to their faith and strength and battled it well.  But for now, I keep on praying that their minds do not have to endure it ever again.  The questions, the fear, the scare, all of the what ifs?.  We all know that Heaven is our goal, the thing we look towards at the end of our journey here, but in the meantime, we hold on to life and enjoy the journey. 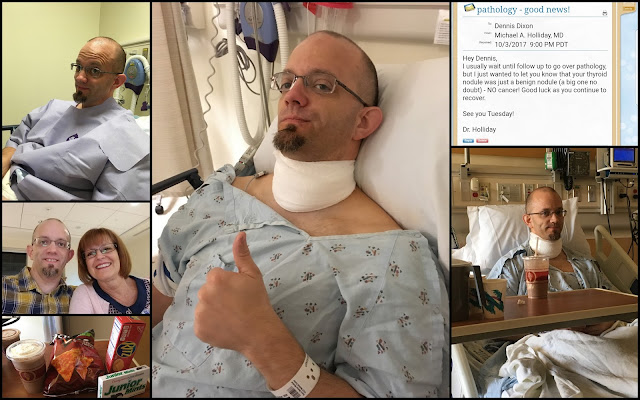 Meanwhile, I was happy to have Dennis call and ask if I could come down for the surgery.  I was like...ummm...you are asking me to come down?  It was a given that I would be going down!  But it was so sweet to have my grown son call and ask me to be there.  Moms just love to be needed.   To want me there, to want me to help with little things, like picking up kids from school and helping with before school chores and evening baths.  It was fun to have extra time with them in their everyday life, well, except for the surgery part.
Thank you, God, for these beautiful children! 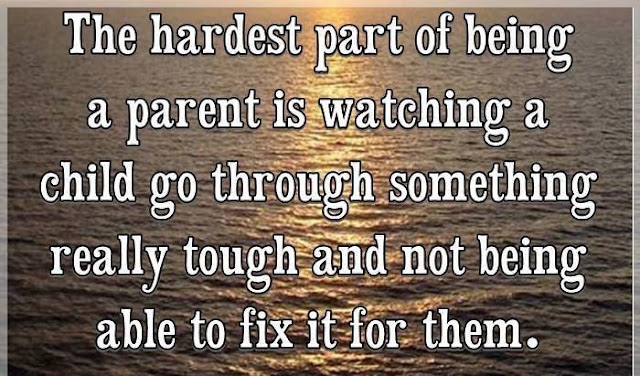 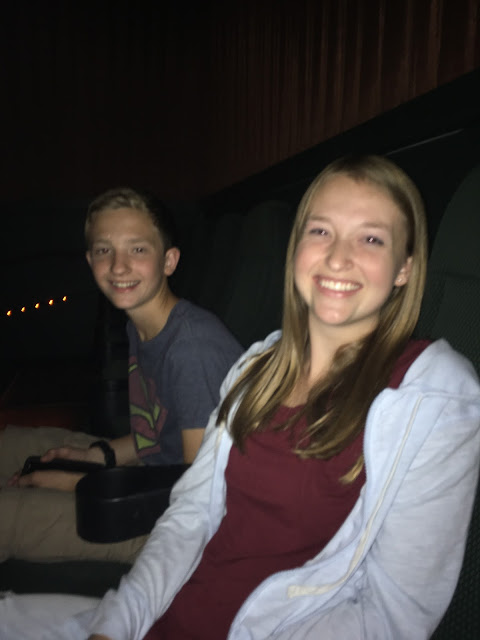 First off Emily and Joshua drove up, I still can not believe she can just jump in the car and drive up here.  We went to do the usual school shopping and out to a movie.  The years have flown by, I am holding on to what I have left of them as teenagers. 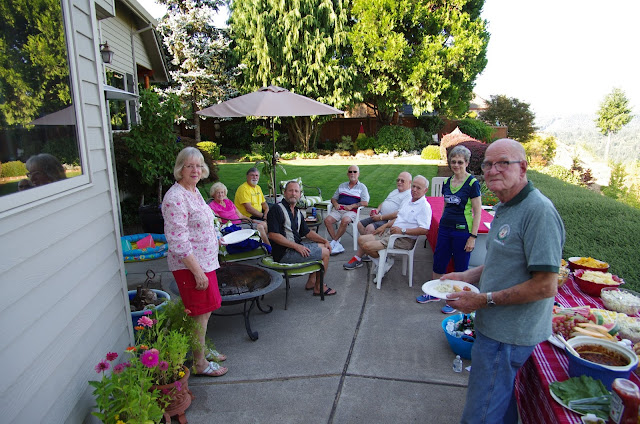 I decided we need to get to know our neighbors.  We have had the ones on each side of us over, but this time we invited them from way down the road.  Everyone of them said how much they have wanted to have an event to meet each other and were so happy we took it on.  We are anxious to continue meeting up, hopefully more than once a year. 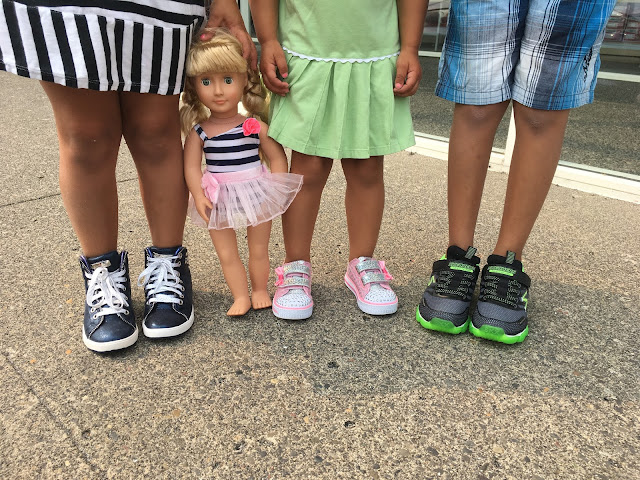 I took the little kids school shopping and bought some shirts for the California kids as well.  I didn't buy these shoes for them, their Mom did, but I thought this was such a cute photo. 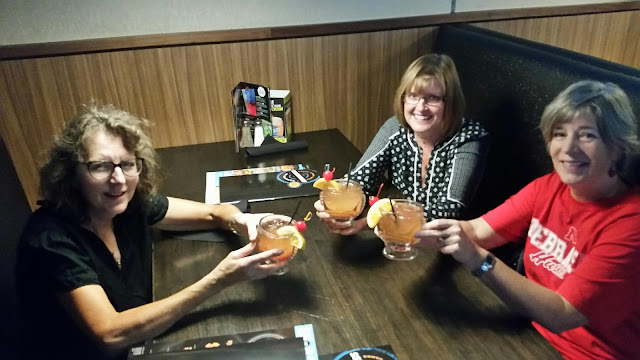 I met up with Maria and Alison.  Pretty amazing that it is almost 50 years since we met.  We don't see each other as often as we would like, but at least we are able to manage a get together every month or so. 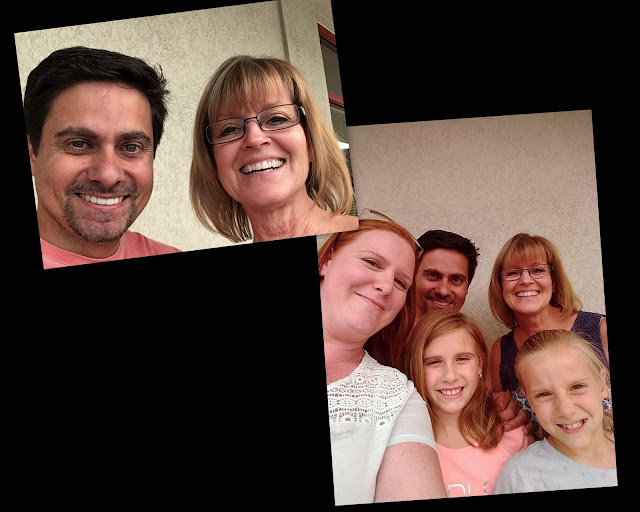 Carlos and his family were in Oregon for a visit.  He came from Costa Rica and was such a fun friend to our family when he was a CASS student.  Pretty sweet to see him as a husband and daddy now. 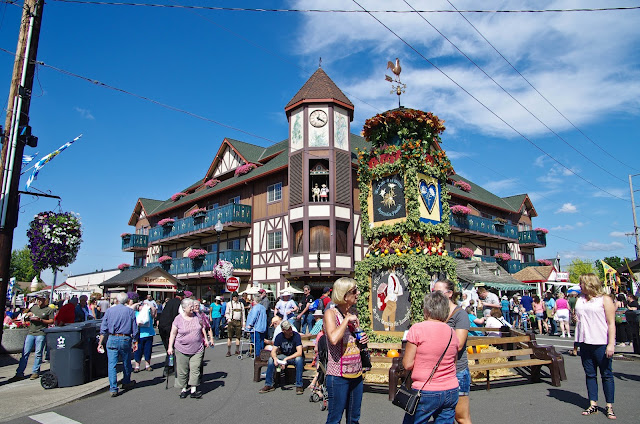 John and I took a drive to Mt. Angel for the Oktoberfest.  We bought our family Christmas gift cards at the Glockenspiel Restaurant.  I think my Mom, especially will like it since it is German.  I am hoping that we can manage to use that card at the tulip festival time. 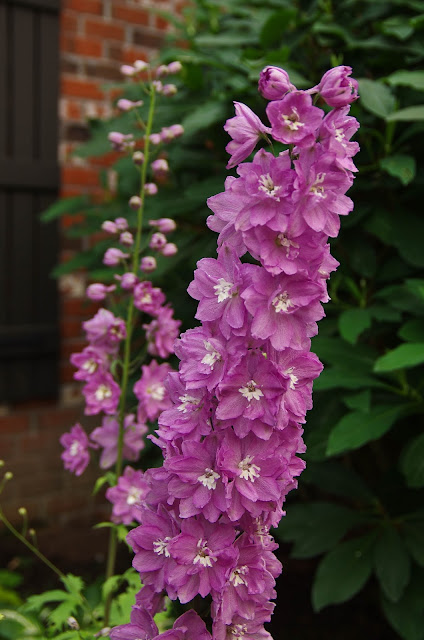 I can't let a month go buy without at least one flower from the yard. 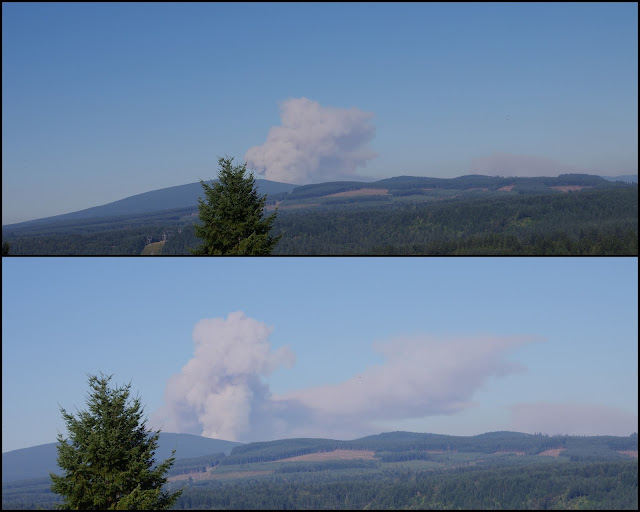 The big event for the state was the Columbia Gorge being set on fire.  It started labor day weekend.  We noticed the smoke as our neighborhood BBQ started.  It began on the Eagle Creek Trail by Punchbowl Falls.  Some teenagers were shooting off fireworks and videoing it with their phones and now the whole gorge is messed up.  Acres and acres of trees and trails are ruined.  A few homes were lost, but thankfully, no human lives were lost. 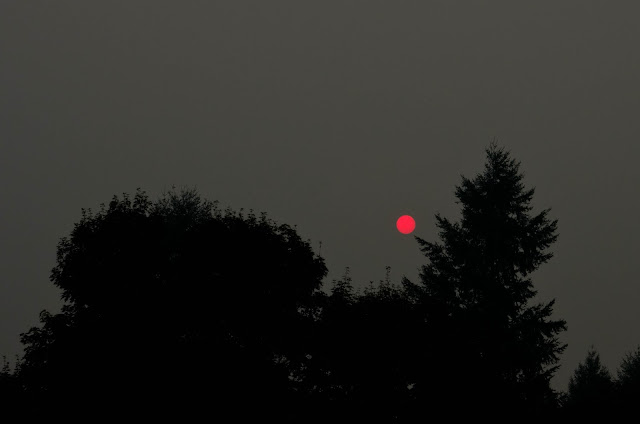 Sunrises were eerie and beautiful at the same time. 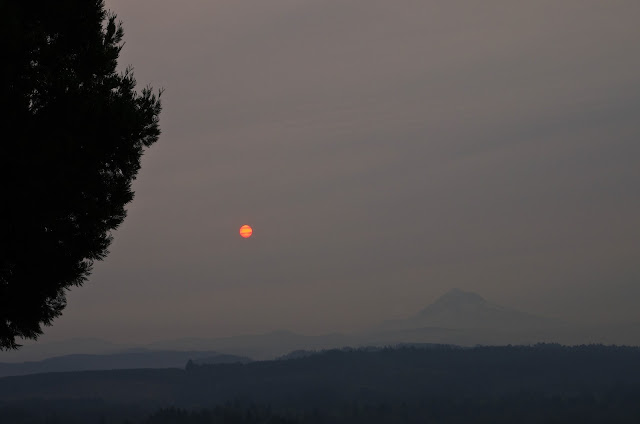 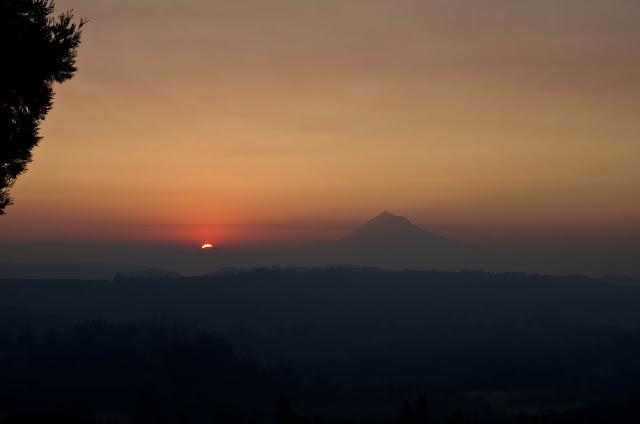 The smoke was so bad here, we could barely see out across the canyon.  It was so smokey we made sure and kept the doors and windows shut.  It was terrible on the eyes and to breathe. 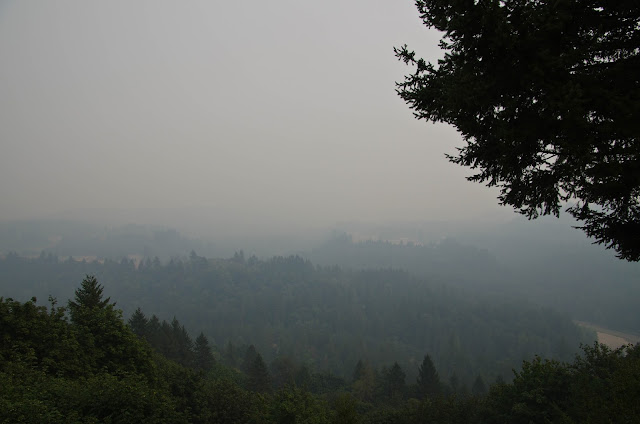 And just as we thought it was going out, the firefighters set fires to backburn.  Here was a new fire that was set to try to control them. 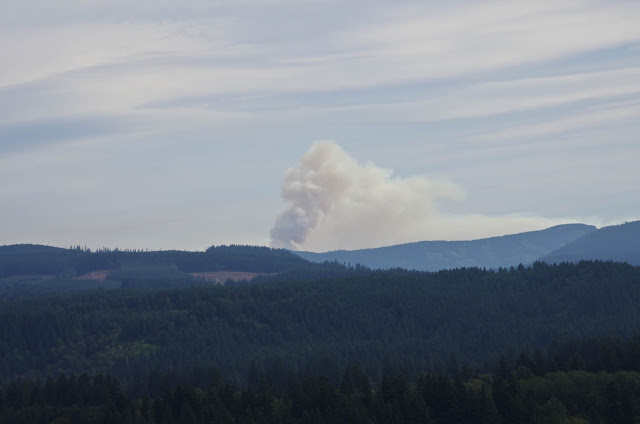 Finally, we had some rain and the skies were clear and bright and normal again! 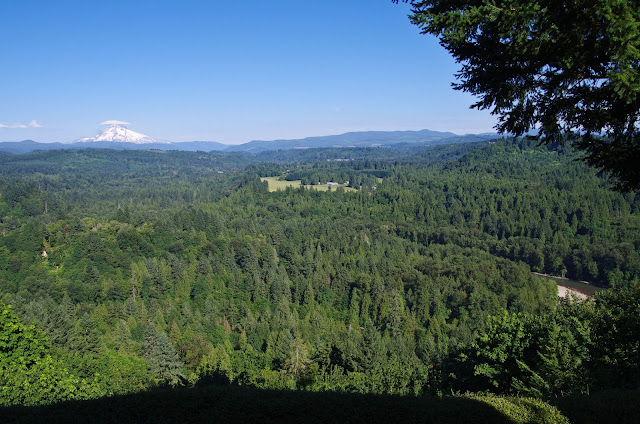 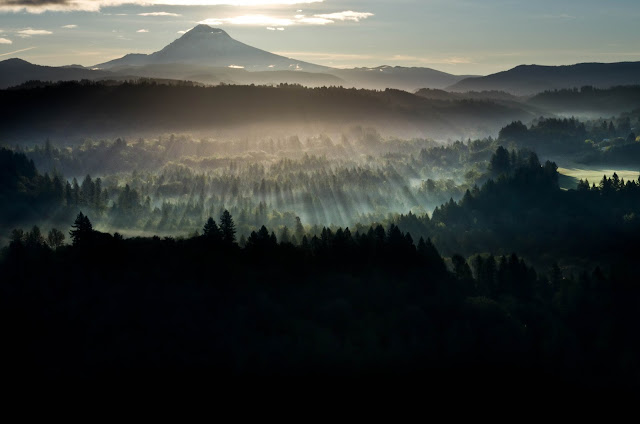 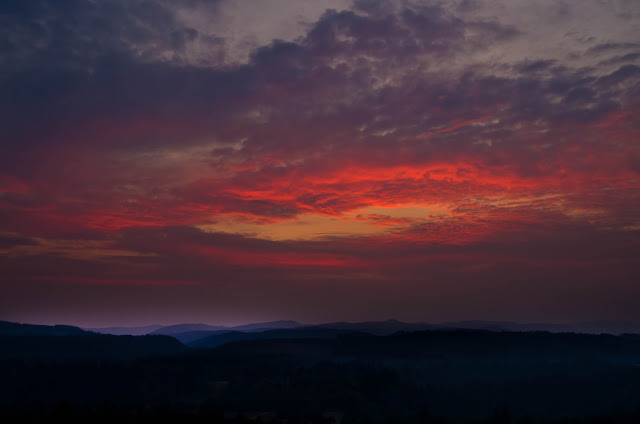 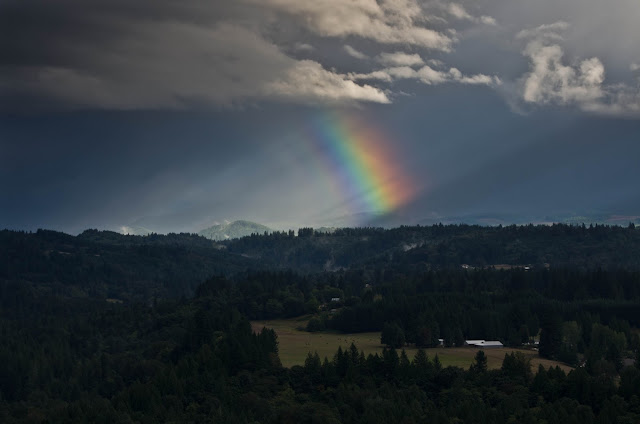 We had real clouds instead of smoke out there. 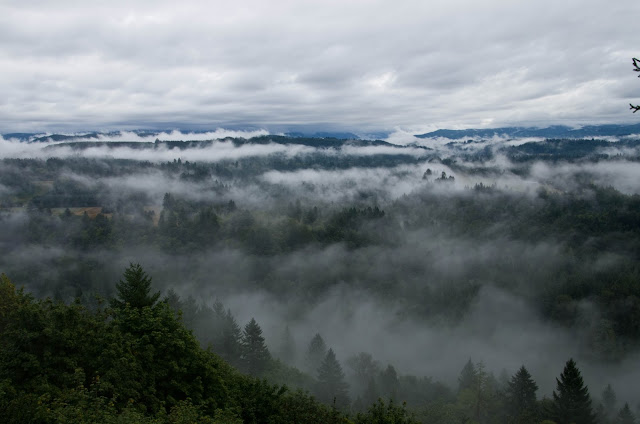 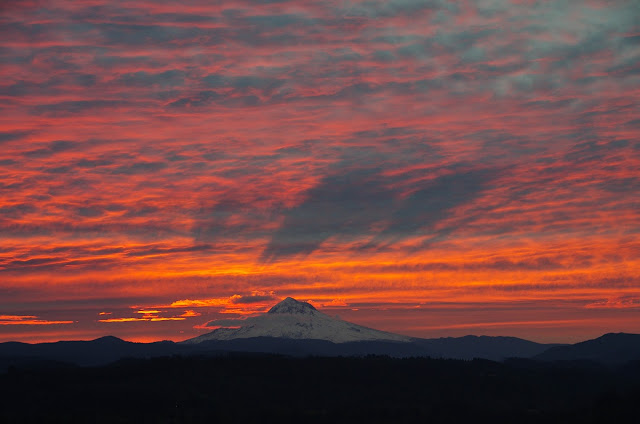 I really do like to see the clouds snaking along the river down below. 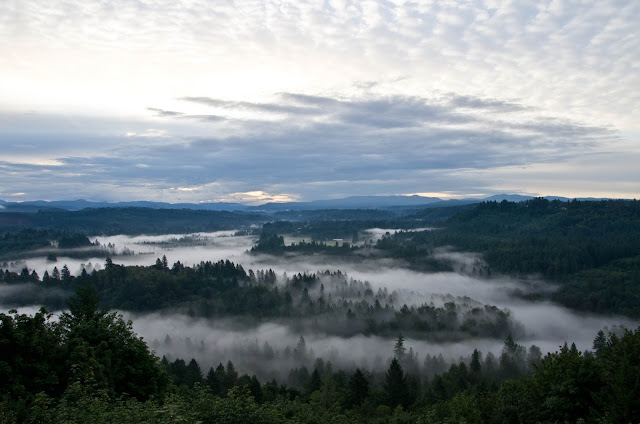 The sun is shifting back to the other side of Mt. Hood.  This morning, it rose just at the top of the mountain.  It made a really cool shadow as it rose. 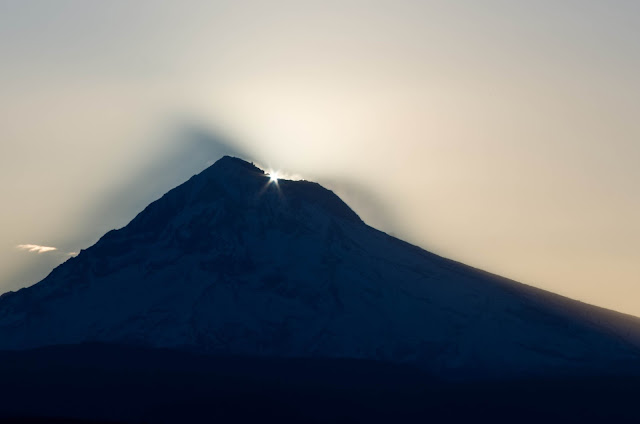