May just blew by too fast!  A lot of activities, but mostly I spent time enjoying working in my yard.  I find myself a little irritated at the end of the day if I have not had a chance to get out there and do something.  It isn't like there is a ton to do, it is pretty much in shape, but no matter what, when I go out there to do one thing, it is hours later and and a full trash bin. Here are a few photos of my flowers for the month. 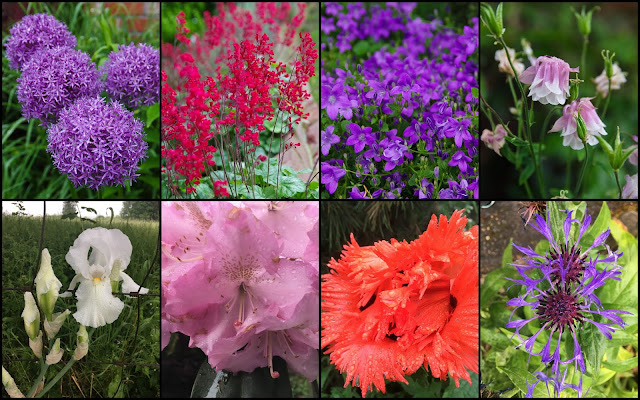 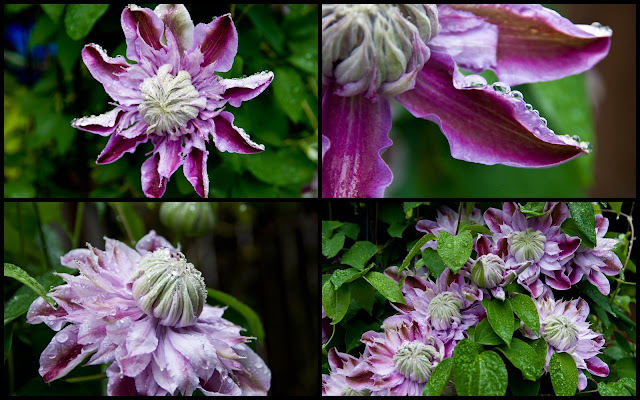 As for activities, I took the kids to see the shows that I bought them tickets for at Christmas.  PINKALICIOUS was for Arianna. 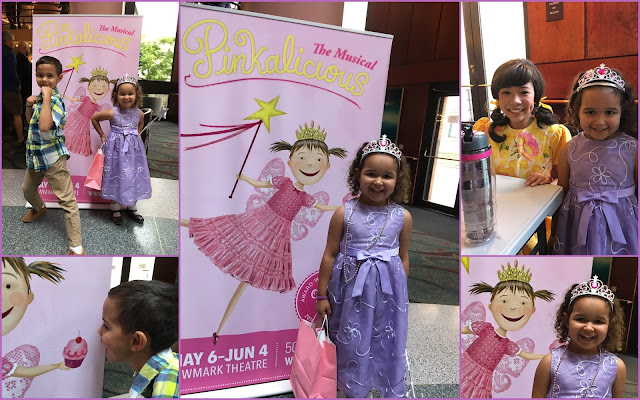 ROBIN HOOD for Josiah.  Both were so fun.  I know for sure that this is the kind of gift I want to keep giving the kids.  Making memories is way better than just another toy. 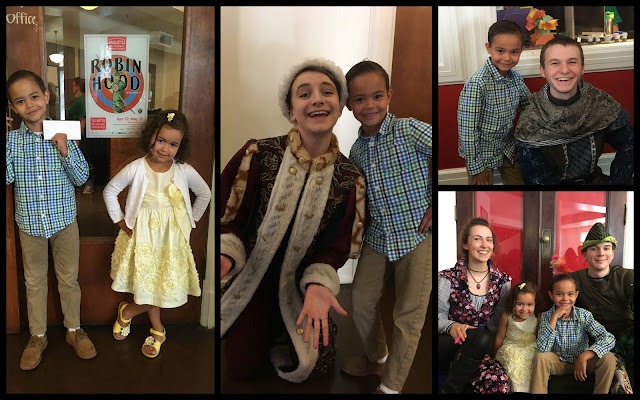 Bonnie and I took a drive up to the Hood River area in search of barns and blooming orchards. It was a little late in the blooming season, but we managed to find some pear blossoms. 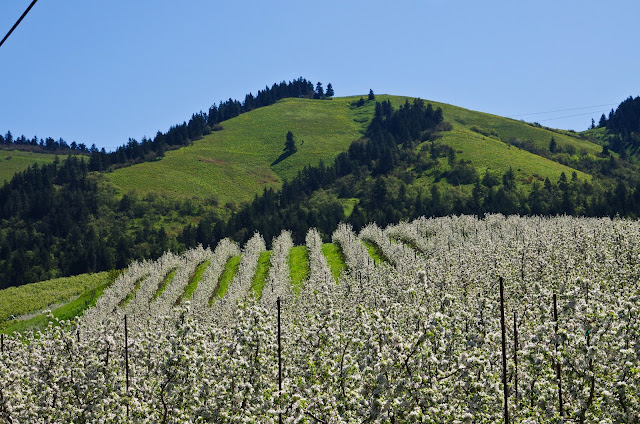 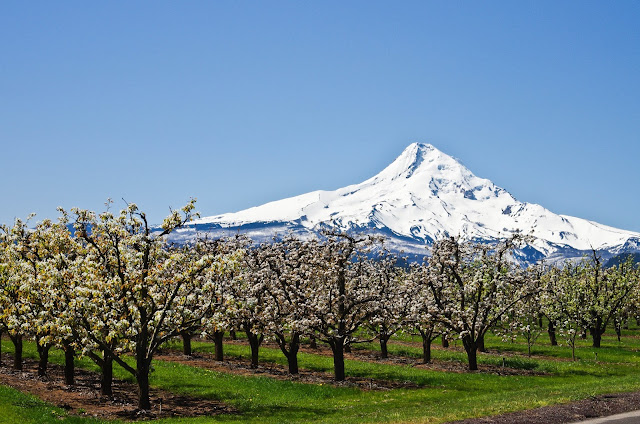 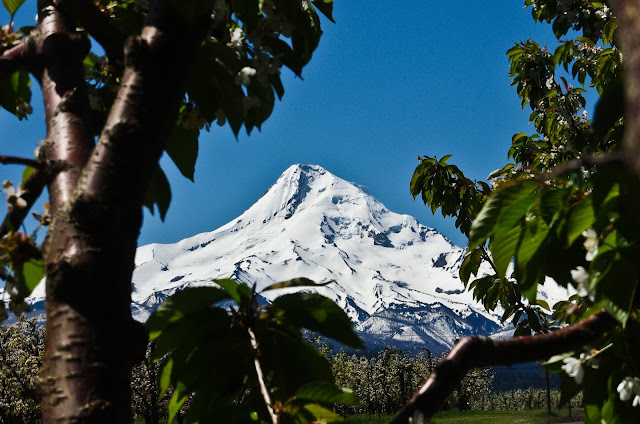 Mother's Day with Mom and Lindy and Cyndi 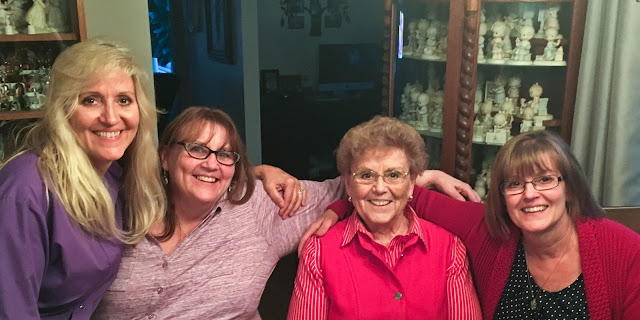 I took a drive to Salem to see the older two grandkids.  Emily drove us to dessert in her OWN CAR!  Now that is unreal to have my grand-daughter not only driving, but owning her own car. 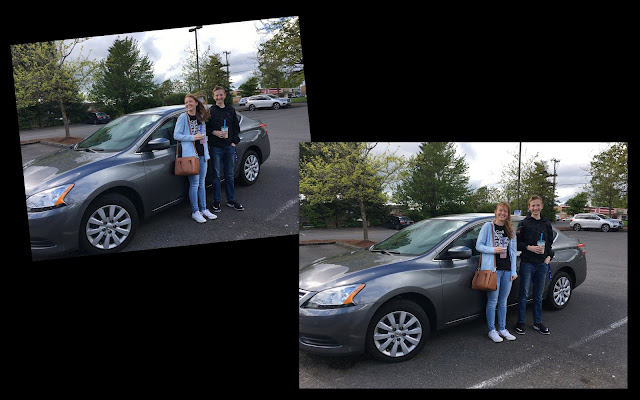 We finally had some sunny days to enjoy playing outside with the 3 local grand-kids. So happy that at least one of my kids decided to live close to me. 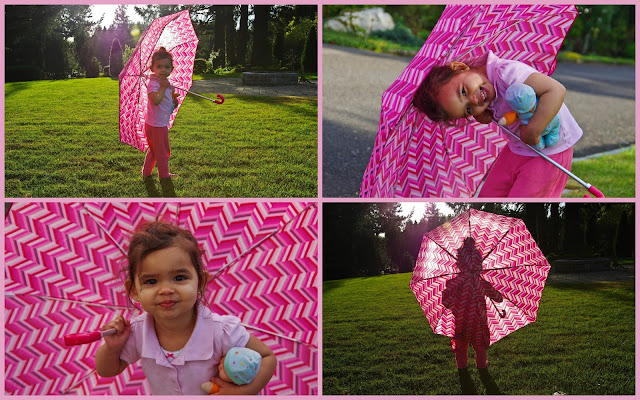 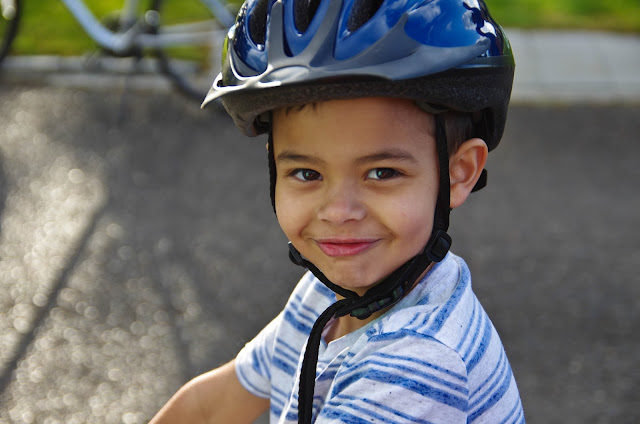 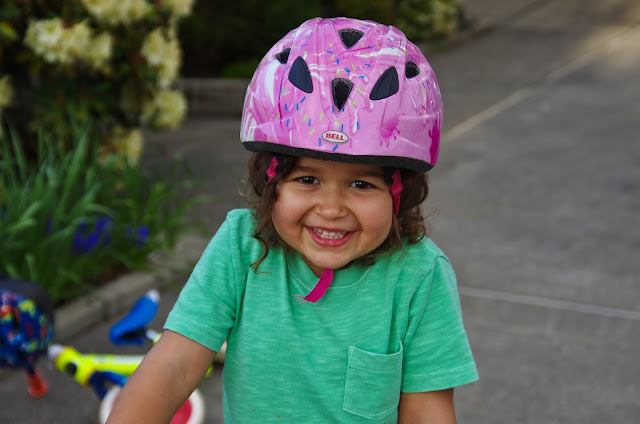 I bought a little teepee and set it up in one of the flower beds.  I plan on hiding surprises in it for the kids to find.  I write a message on a note and Josiah reads it and off they go in hunt of their surprise.  Some days it is a little toy, other days a snack or lunch. 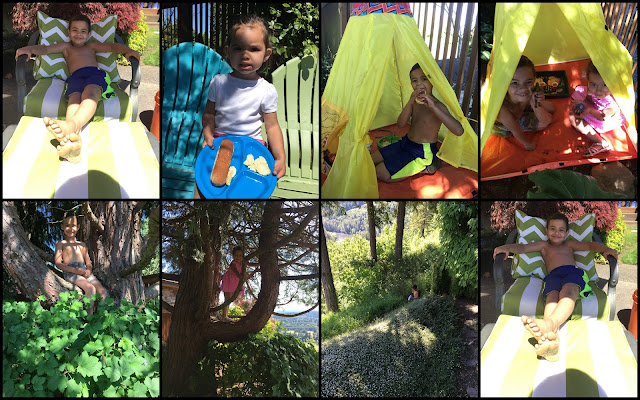 One day, John discovered a tiny little baby chipmunk int he garage.  No idea where its mommy was, so he set it free in the yard. Later on, I found another one.  I took it outside too.  The next afternoon, the kids and I found 5 more!!!  They were too tiny to be afraid and let us hold them and play with them.  We fed them thistle seeds.  We had no idea if a mommy was around or not.  The kids were overnight that night. Sadly, the next morning when we went out to see them, the cat had put an end to 4 of them and had them proudly on display on the steps.  Not sure what happened to the 5th.  I am hoping he got out to find his other 2 siblings.  The kids helped me bury them. 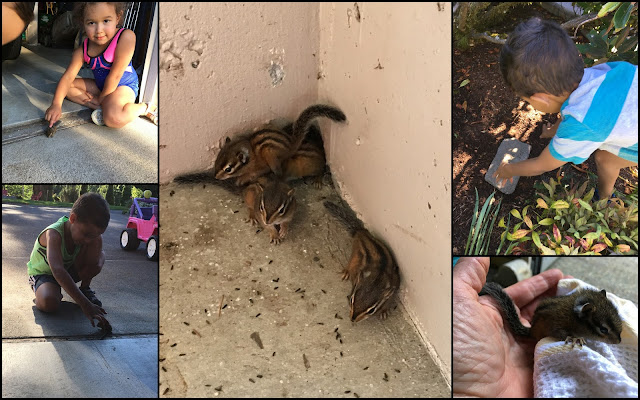 It is always fun to have the kids overnight.  Their request for breakfast was two pancakes with a sausage in the middle.  I told them it was called pig in a blanket.  They liked that.  I made them a couple of pig pancakes too.  Arianna is playing with one of the dolls that Jessi used to play with.  Baby That-a-way.  Don't you just love her morning hair? 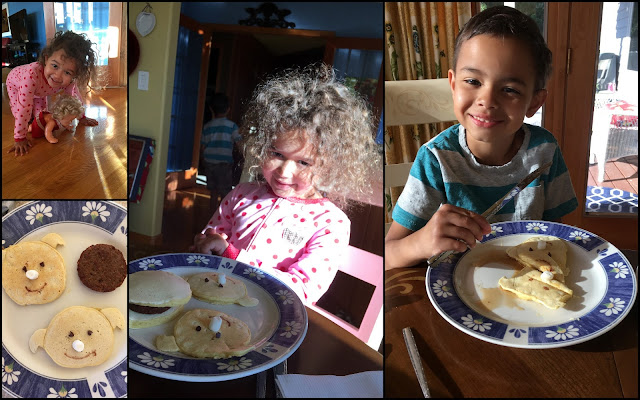 I have a really pretty humming bird at my feeder all day every day.  I have seen them before, but never for very long, this one is constant.  He is not as greedy as the Annas hummers, who mark their feeders and guard them from any other hummers.  This guy is happy to share, even with the Annas.  He is a Rufus humming bird. 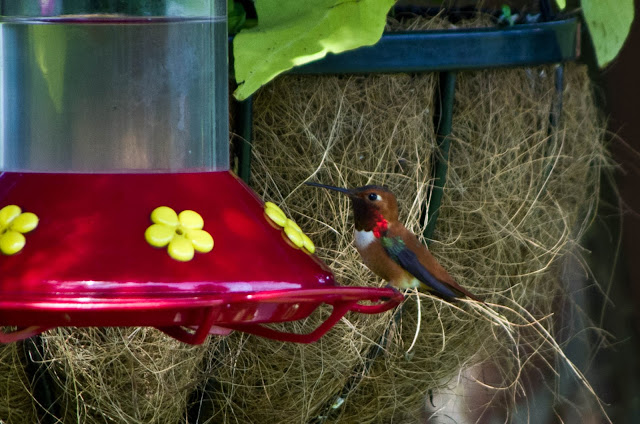 It was a pretty rainy month, so I put the rainy days to good use and recovered my patio cushions.  Also, I painted a rocker that we got for free from a neighbor who was moving.  It was brown and no varnish left on it. I had no idea it was as dry as it was.  It soaked up 9 cans of spray paint!  3 primer and 6 top coat! 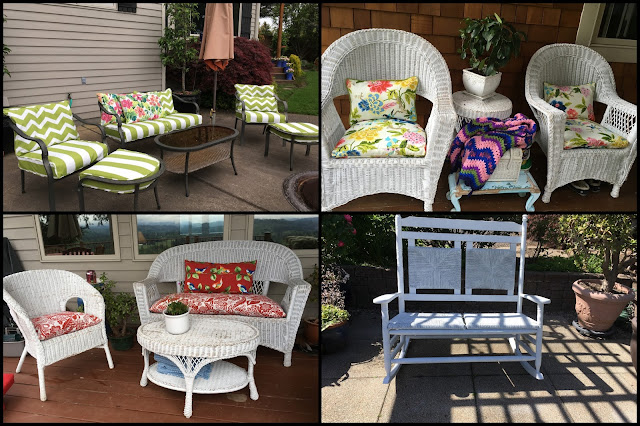 I also decided that we needed to add to our little kid cars.  A few years ago, I bought a 4 wheeler from a neighbor's garage sale for $25.  It needed a battery.  Then we had to put on a new pedal.  Last summer, it gave up high speed, so I tore it apart and discovered it needed new gears.  I found them online and was so pleased with myself with my mechanical skills.  I think I may become a mechanic!  I installed the new gears and it runs perfectly now.  So wanting another vehicle for the kids, I went on Craig's List.  I found a little car for $50, battery and charger.  When I went to the home to get it, she mentioned that she had another one.  I asked to see it.  She said if I wanted it, I could just take it for free!  It was so dirty and only would go backwards.  But we brought them home and I spent a few hours cleaning it.  It was full of mud.  Once clean, it was still all faded from the weather.  I knew it would be a battle over who had to ride the old car. So I bought a can of purple glitter paint, taped it all off and sprayed it.  I again was pretty impressed with my body work skills.  Who would have thought I could be a mechanic and a car painter too?  And guess which car they all want to drive?  yep!  Pretty good deal.  Two little cars, including batteries and chargers for $50.  Plus an $8 can of paint.  Oh, and the only going backwards part?  Well, Josiah was sitting there fiddling with the shift and suddenly it went forward and has been doing great ever since! 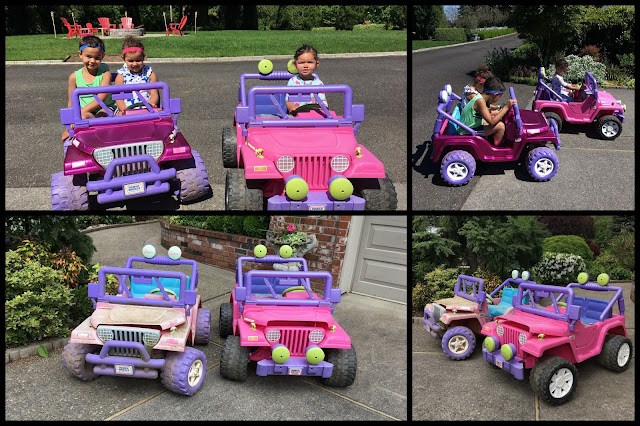 And suddenly it was the end of the month and promotion time again. Arianna is headed for kindergarten next year. 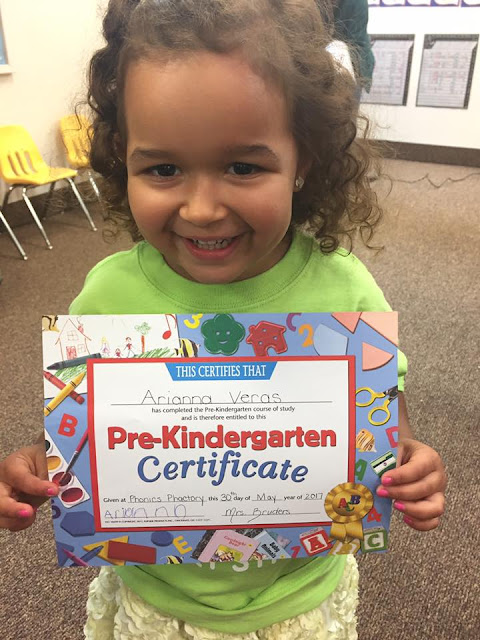 Josiah had a little graduation from kindergarten and heads for 1st grade in the fall! 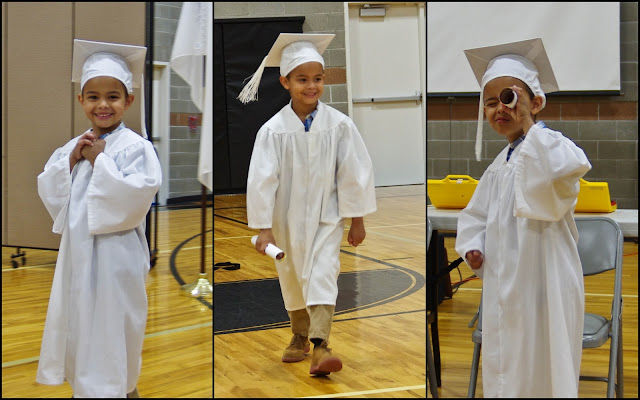