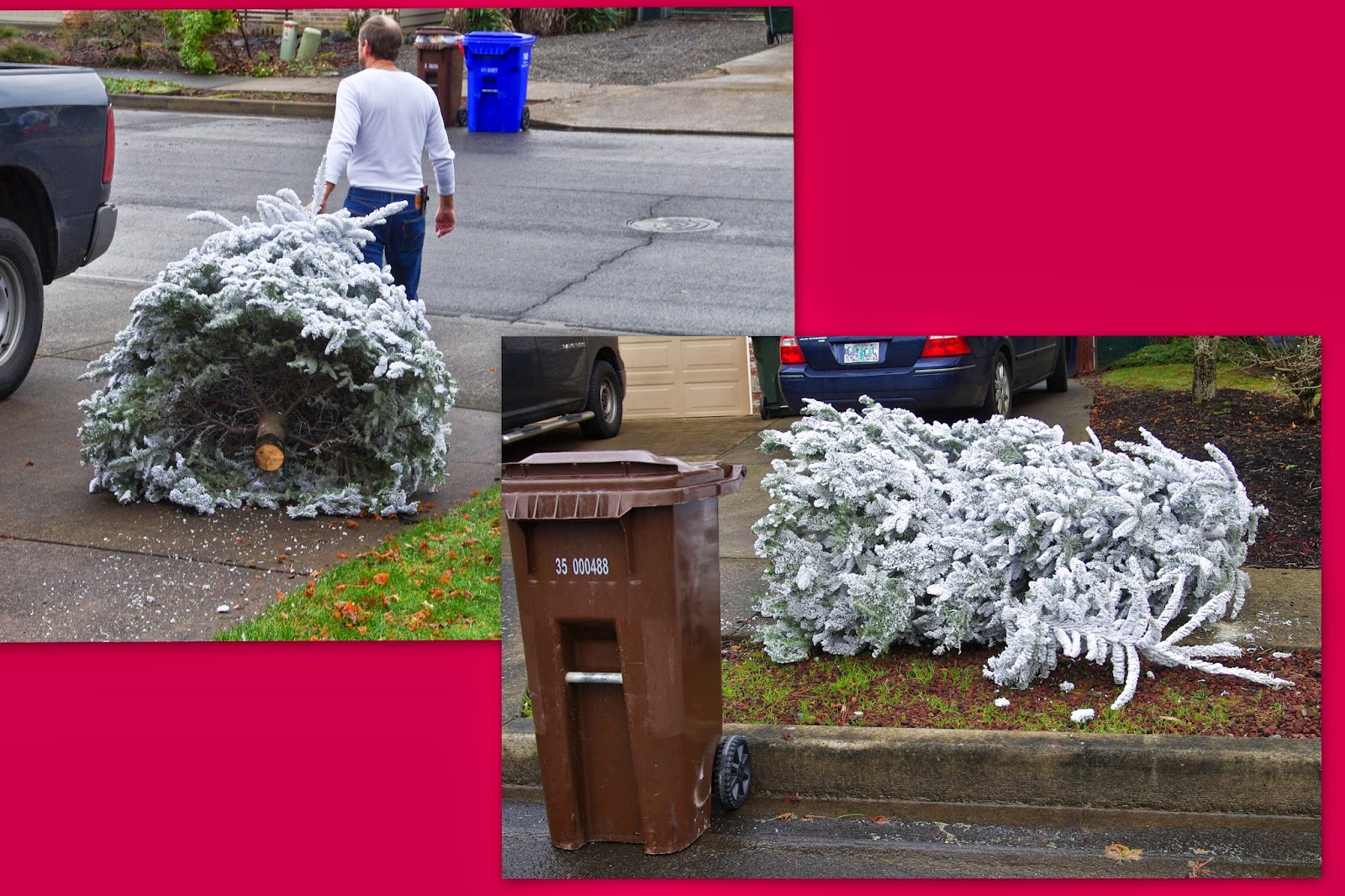 I know it seems crazy to some, but that tree was up for almost a whole month!  I thought that it was going to be a little extra busy this year with the new baby coming, so I started getting ready for the holiday earlier than usual.  By the time Christmas rolled around, the tree was so dry.  It had a funky smell and the branches broke off just by touching them.  The once perky branches were hanging as low as they could go, ornaments were falling, it was a mess.  It had to go.  Soon.  So the morning of the 26th, we tore it down.  It was trash day.  The recycling said they would pick them up, up to 8 ft, so John had to cut off the top for them to accept it. Kind of sad, but it had to be.  Goodbye tree.
Posted by Vicki at 8:20 PM No comments: 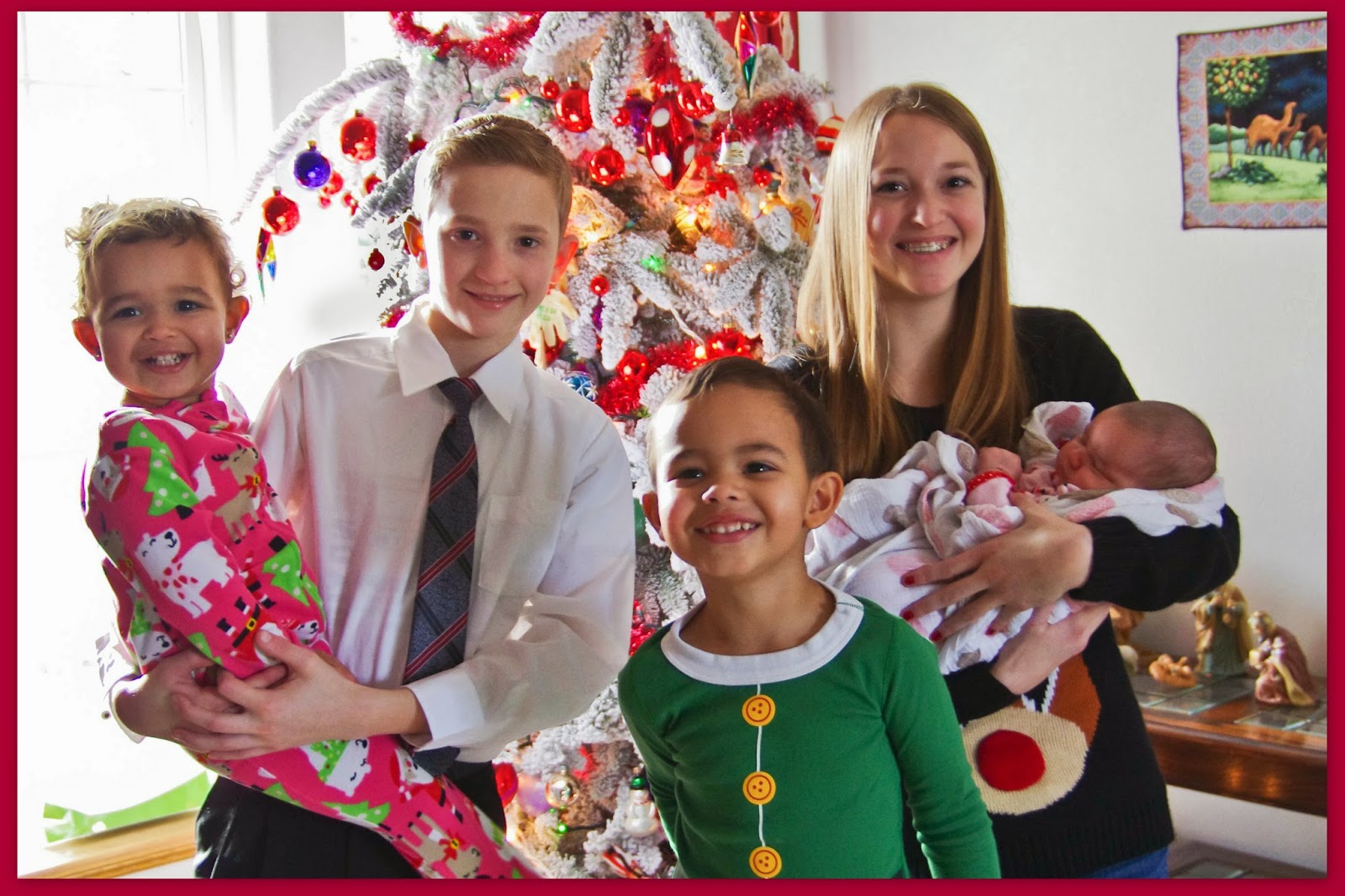 Christmas Day
John, Rachel, Emily and Joshua spent the night on Christmas Eve.  Jessi, Ariel, Josiah, Arianna and Lina (still in their pjs) came back the next morning for breakfast.  Of course we had the traditional oatmeal pancakes along with hashbrowns and pepper bacon. 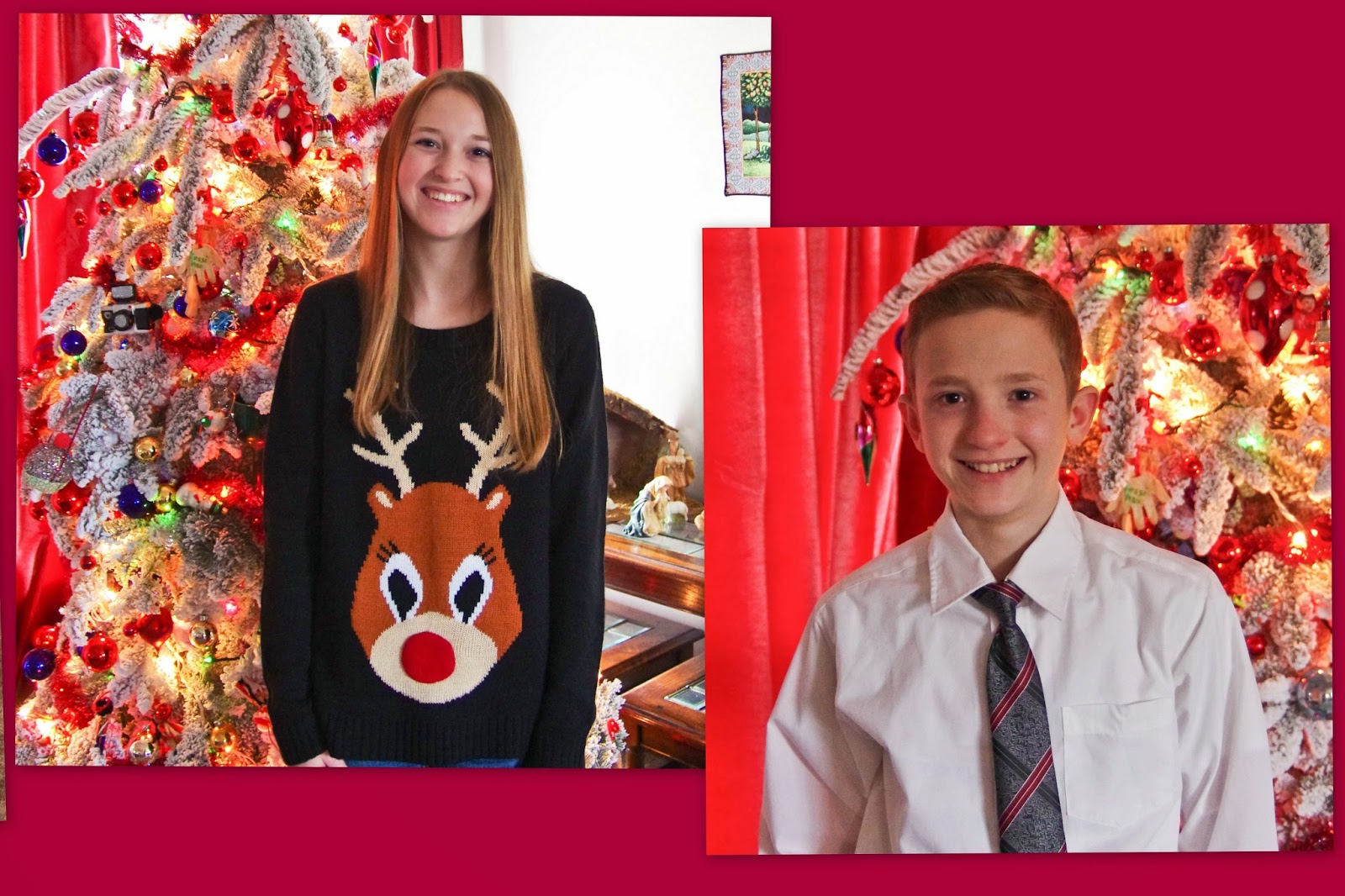 Emily and Joshua all ready for the day. 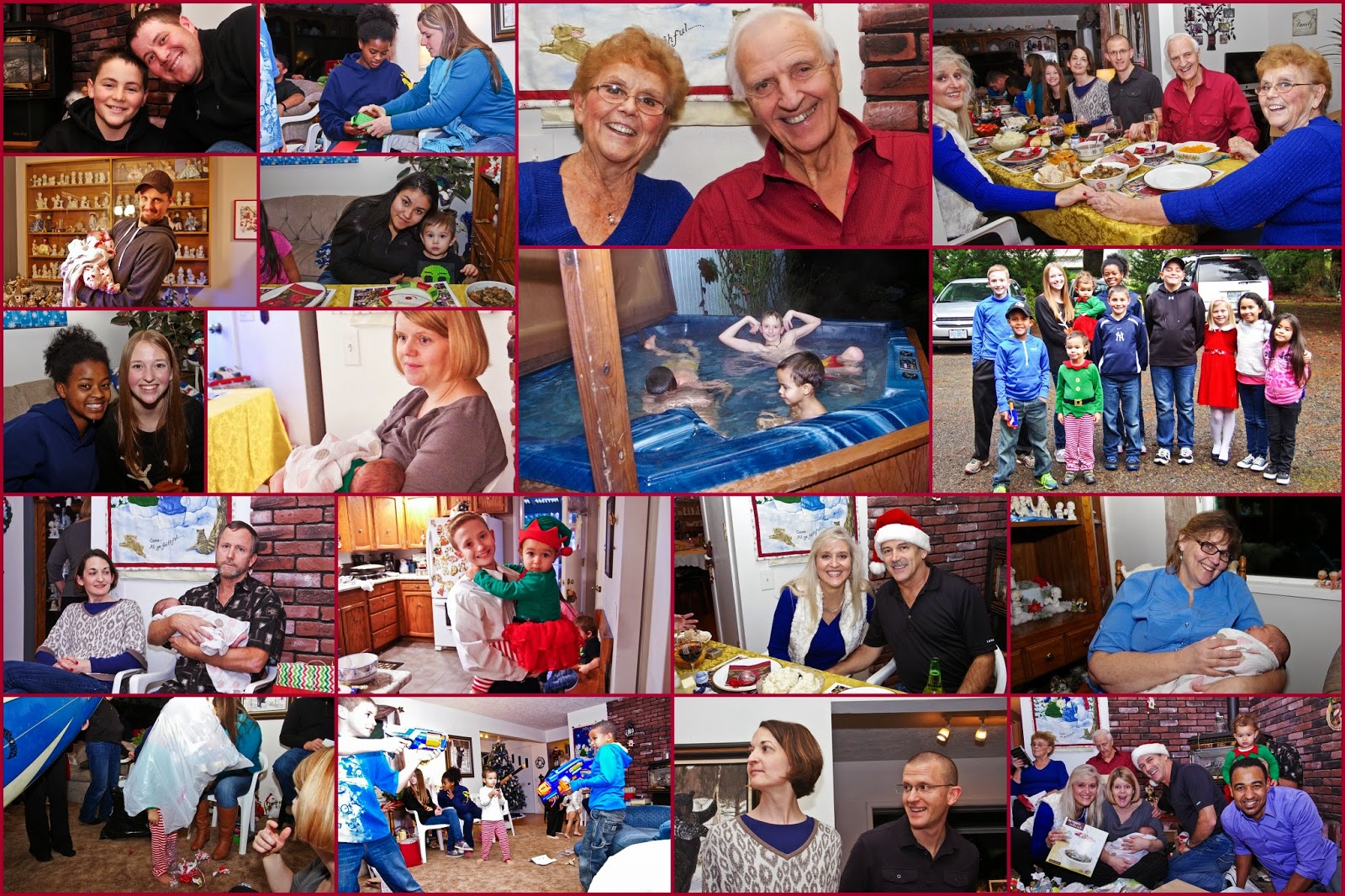 We headed over to Great Grandma's place for the big family dinner.
The table now goes all the way into the next room, but we still all sat down to eat at one table, which makes Great Grandma pretty proud.   Lindy's son David and his wife Beth and their kids, Meri, Luke, Nate, Ellie and Sam came from Colorado this year.  Matt and Karely and Bane were there too, so Lindy was a pretty happy Mom.  We had a fun time together, eating, playing, opening gifts, hot tubing and all the things that make our holiday.
Posted by Vicki at 8:13 PM No comments:

Christmas Eve.
It is so nice to have the house full of kids again.  It seems like that is how it always was and then suddenly they grew up and were gone.  Of course Christmas is always nice, but that spark was lacking.  But now, they have returned with their arms full of kids!!  It is fun to shop for toys again, even though the toys are different from the ones my kids had when they were growing up.  Sometimes, I have no idea what it is that I am looking for when they tell me something they want.
We started out the evening with a steak and salmon dinner. Afterwards, Josiah and Arianna passed out the gifts to everyone from them.  Then Joshua and Emily passed out what they brought.  It is really amazing to have your grandkids hand them something they have just for you.
Then it was time for the grandkids to open what we gave them.  Those crazy little ones had to be talked into setting aside what they had just opened in order to get on with the unwrapping of the other gifts that were there for them.  They loved everything!  Little Lina didn't get what all the fuss was about. 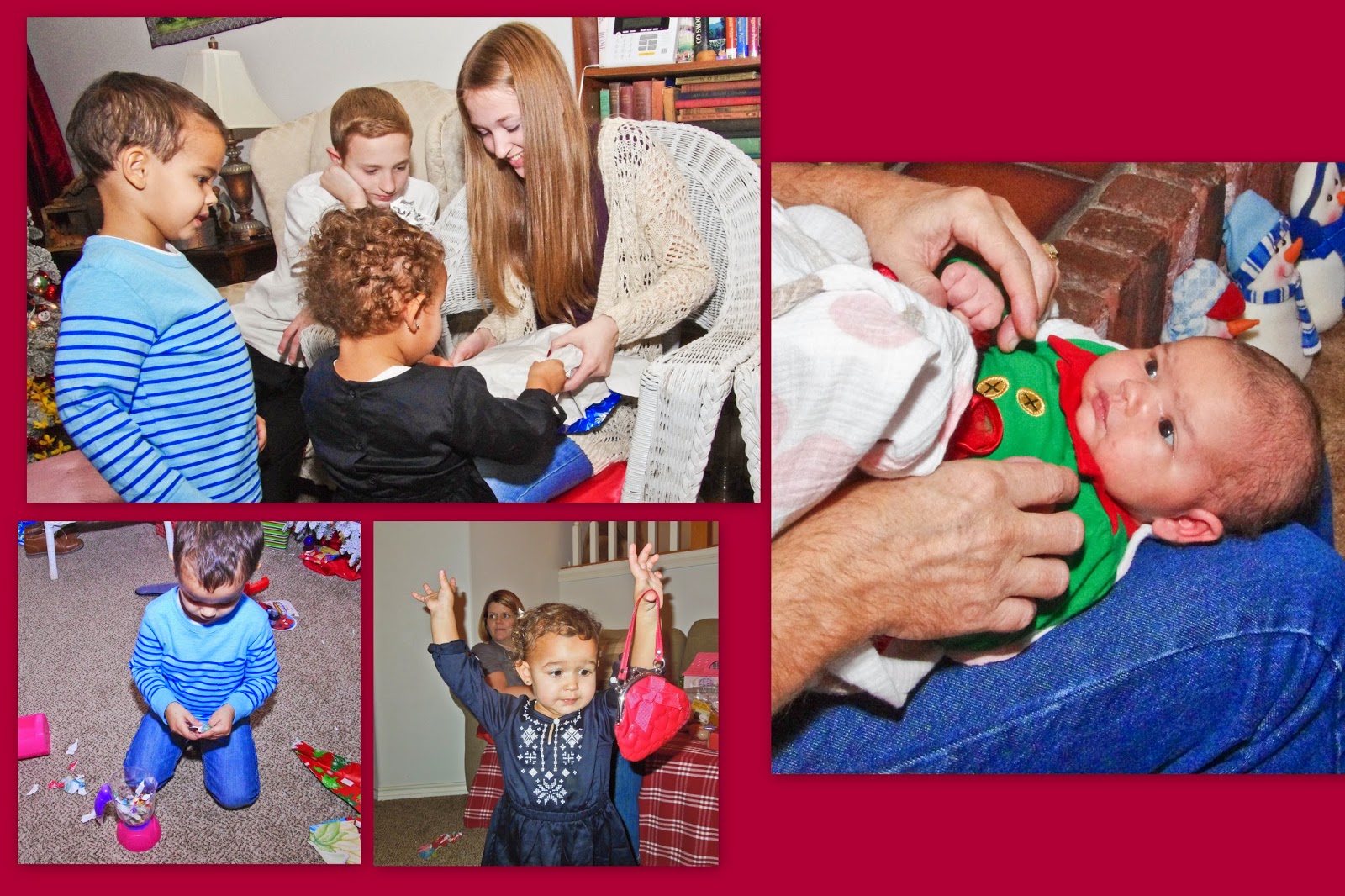 This coming year is a special birthday for Emily, her Sweet 16.   We have been asking her for a long time where her dream place would be to travel to.  She said Hawaii.  So this year for Christmas we announced to them that we will be taking both of them.  In order to get their gift, they had to open up the gifts that led to it...starting with a bucket and shovel, sunscreen, flipflops, beach towell, beach ball, a lei, and a tiki glass...by the time they got to the final paper, they had pretty much figured out they were going somewhere beachy.  But they were pretty shocked to find out it was Hawaii.  It is going to be so much fun, probably more fun for me than them. 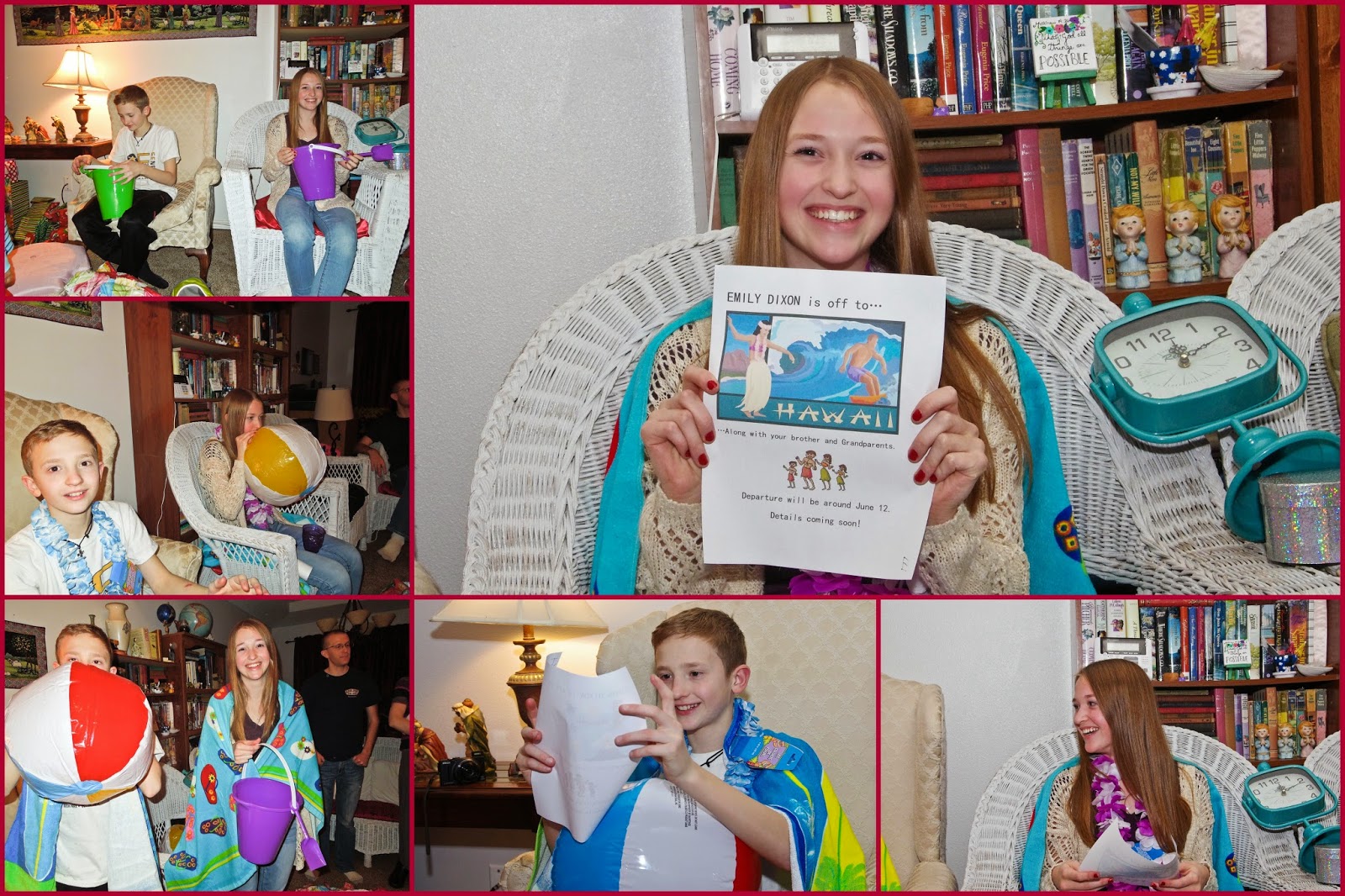 I just love it that John and Rachel were married in December because that means every year I get to have a whole weekend with Emily and Joshua while they celebrate their anniversary.  This year was their 18th anniversary.  Even though Emily and Joshua are getting older, there are a few things that stay on the schedule of things to do while they are here.  One is to have them help me make popcorn balls. 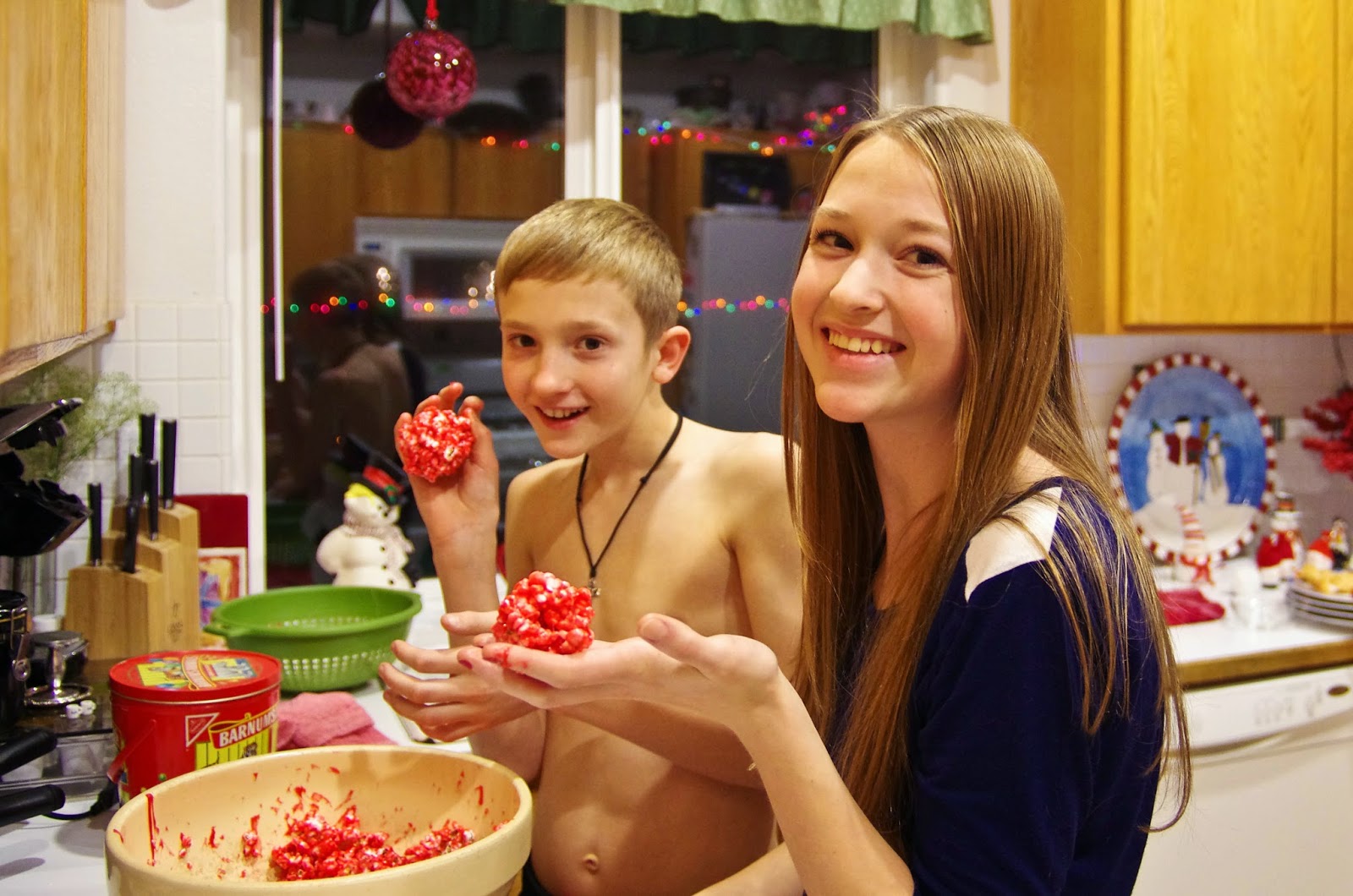 The next is to take a drive to see Christmas lights. 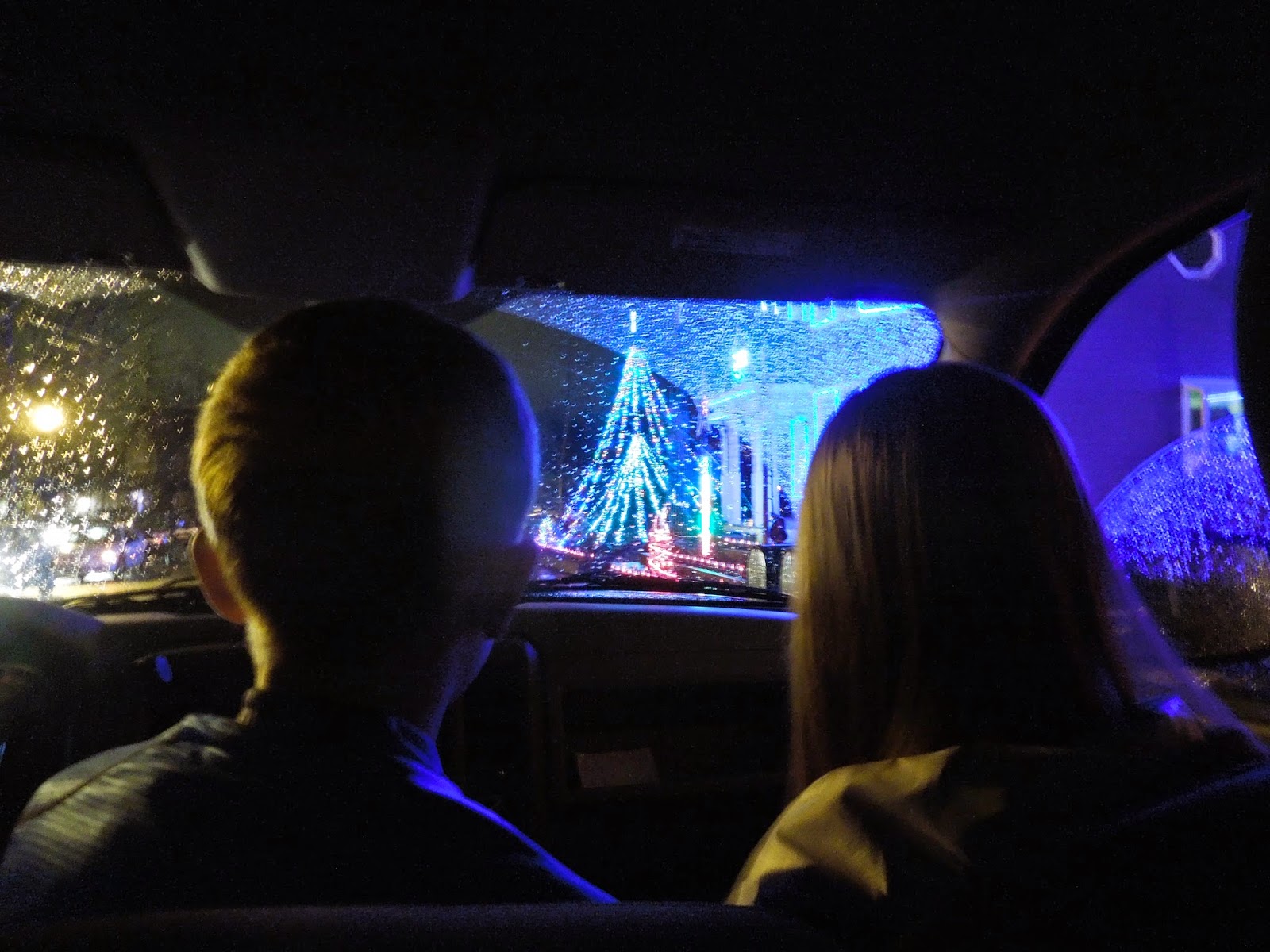 And we just have to get to Lloyd Center and go ice skating. 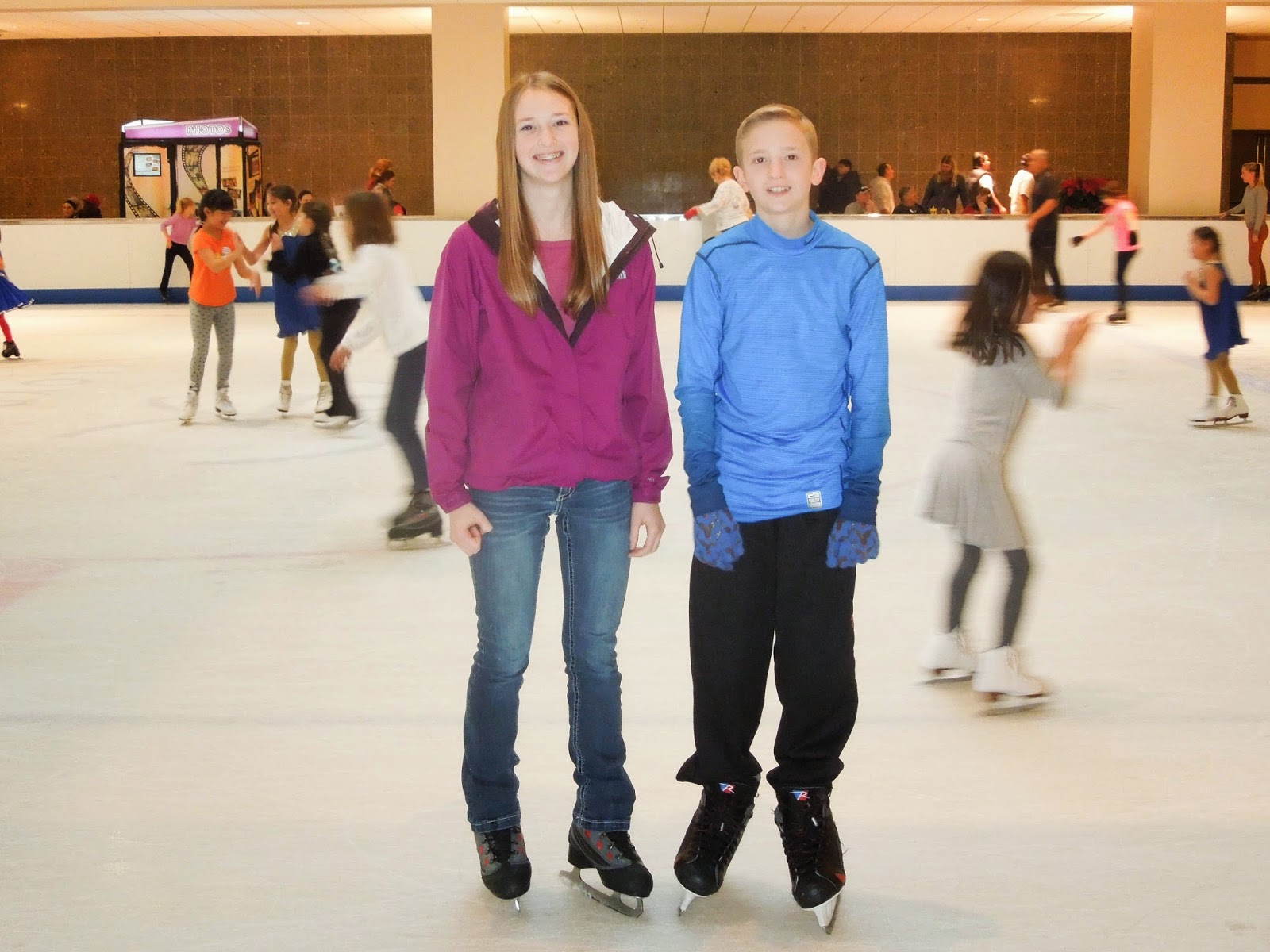 This year it was also the same weekend that Josiah and Arianna had their Christmas at their church.  Lina slept through it all. 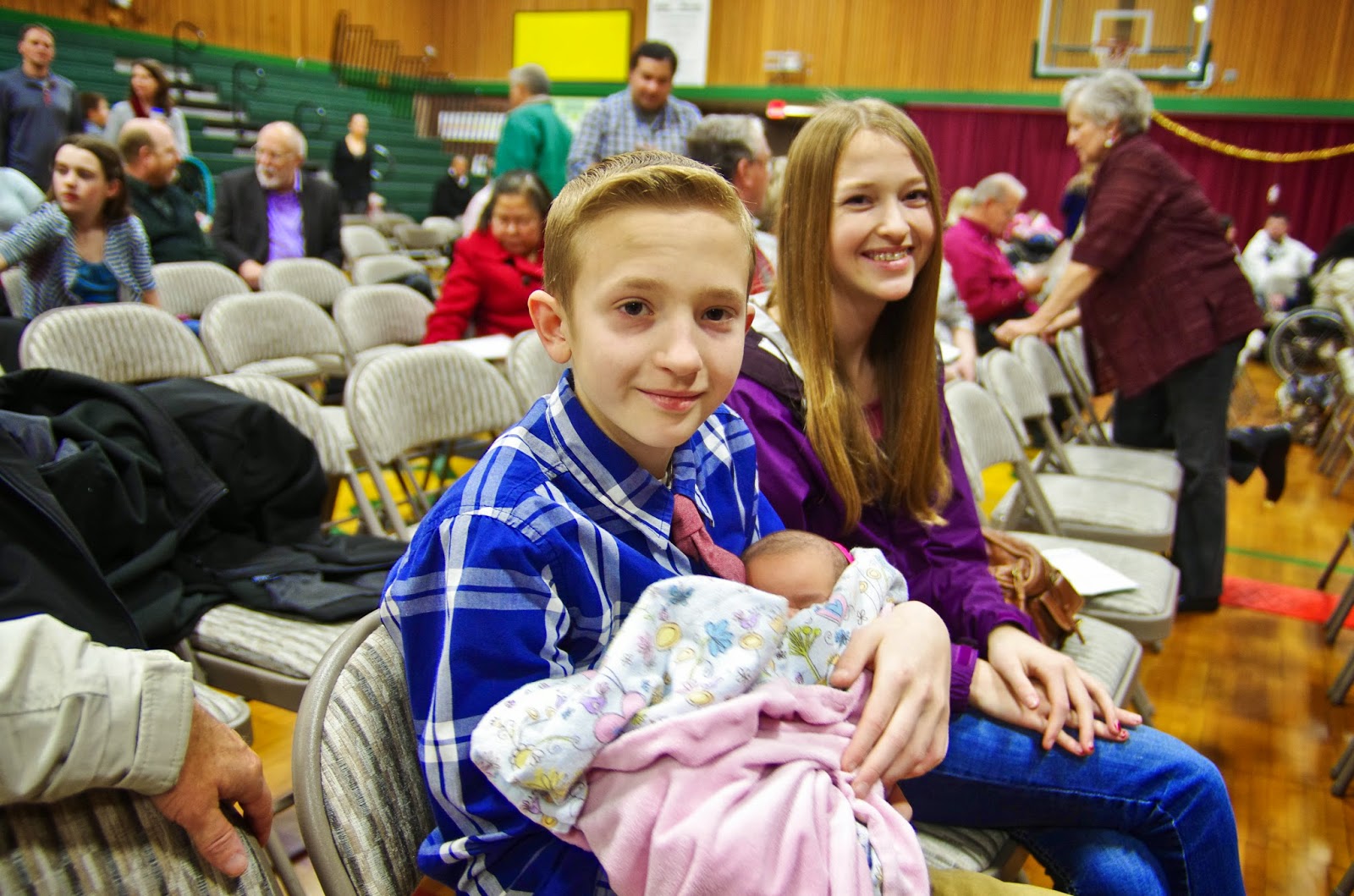 Josiah decided he didn't want to sing the song. Instead he just stood there.  Arianna went through all the motions. 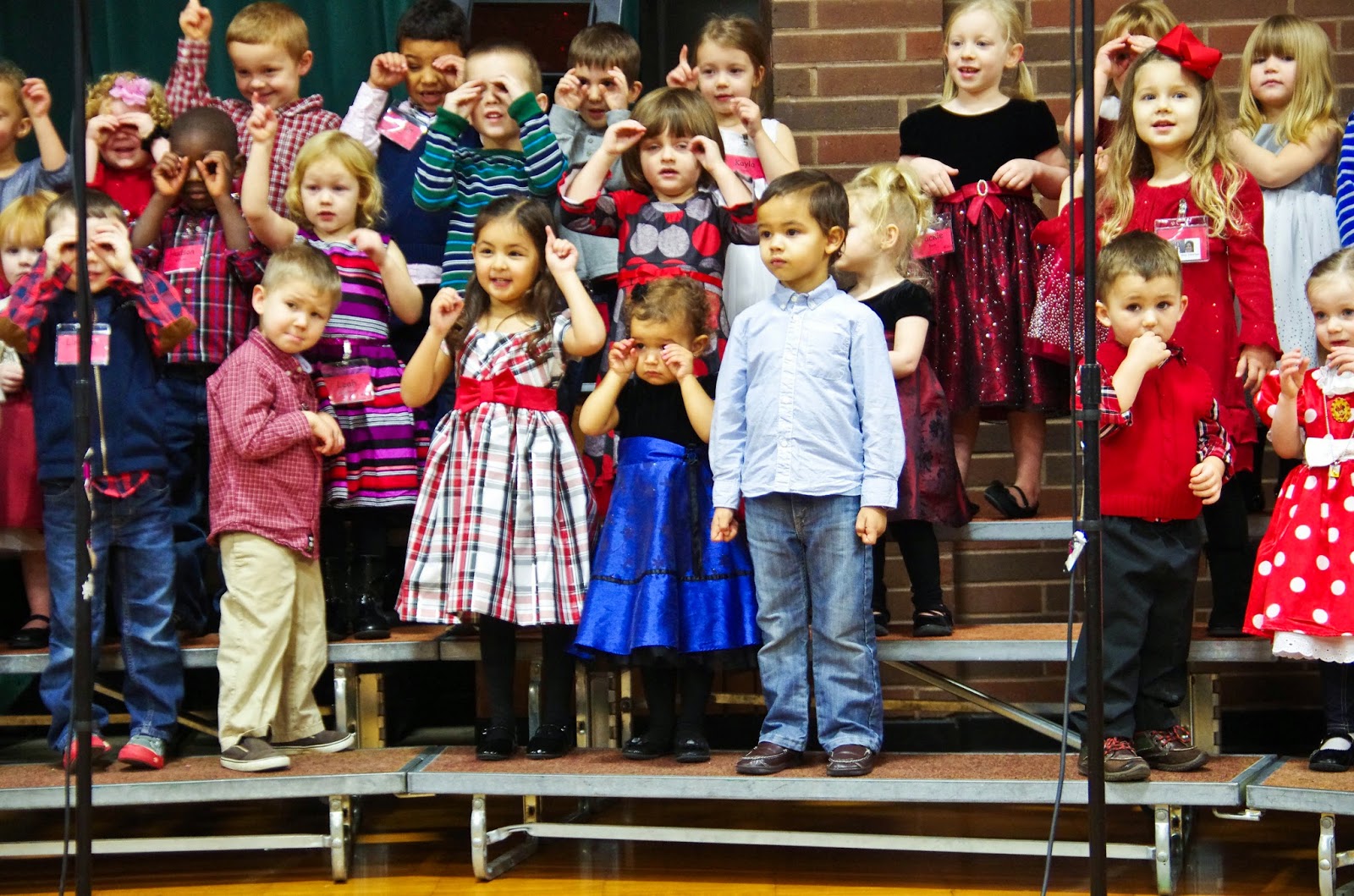 Here he is checking out what she is doing. 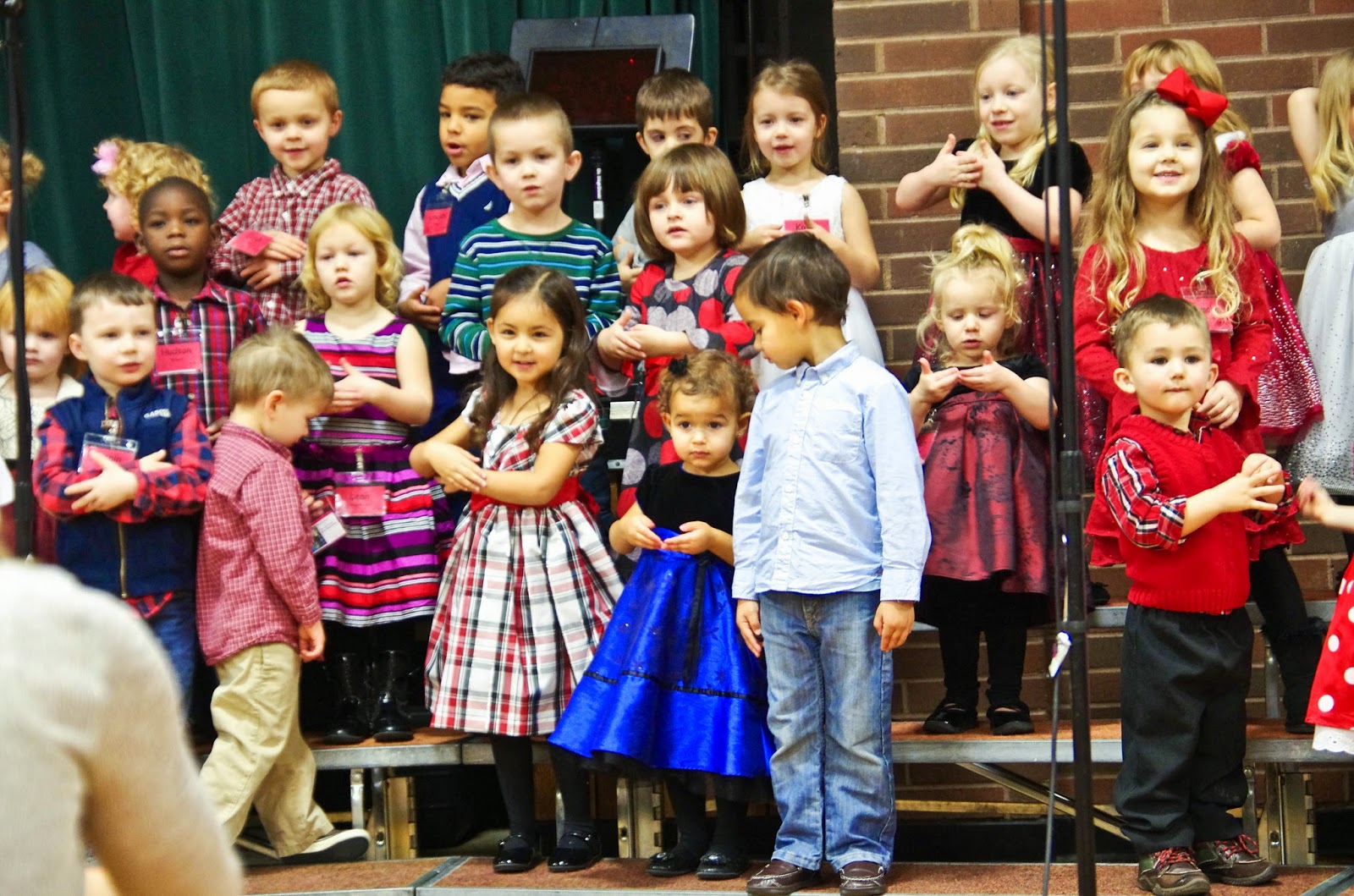 So, he didn't want to do it, but he had to show her how to do it right. 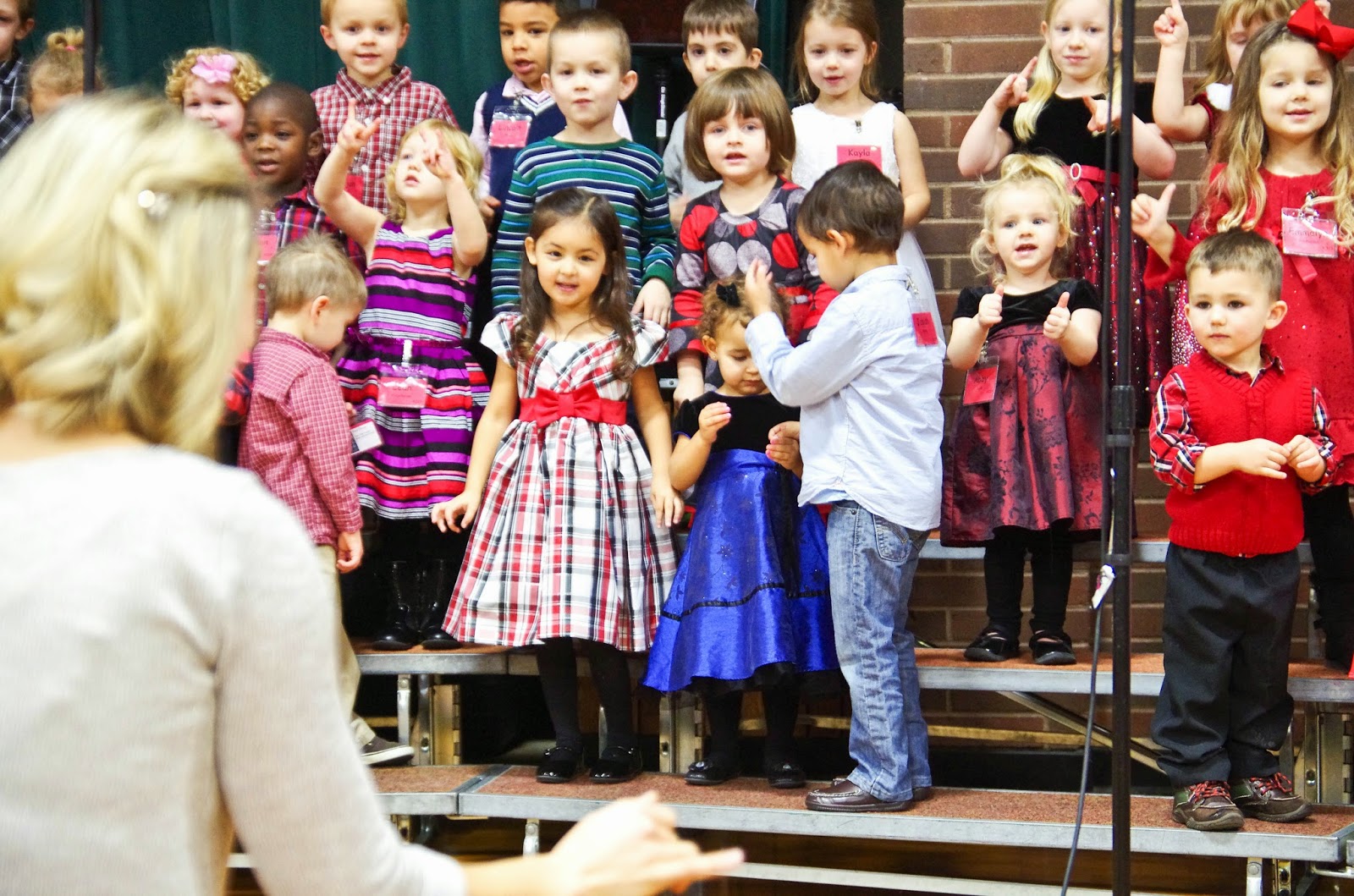 I could not believe it...it was just too much for him to stand through the whole song...it had me cracking up.  (not his mom)  well, at least he didn't just walk off. 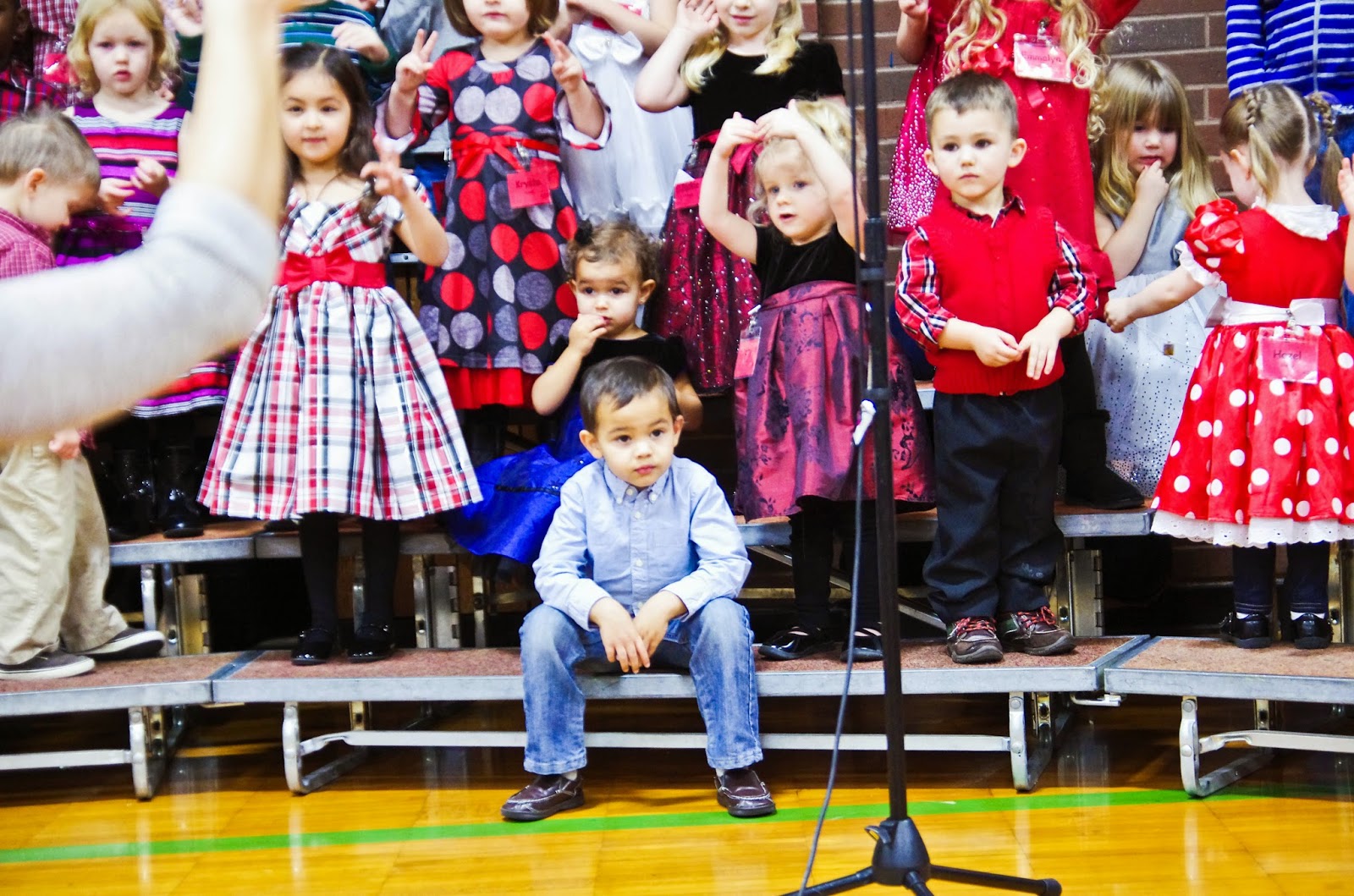 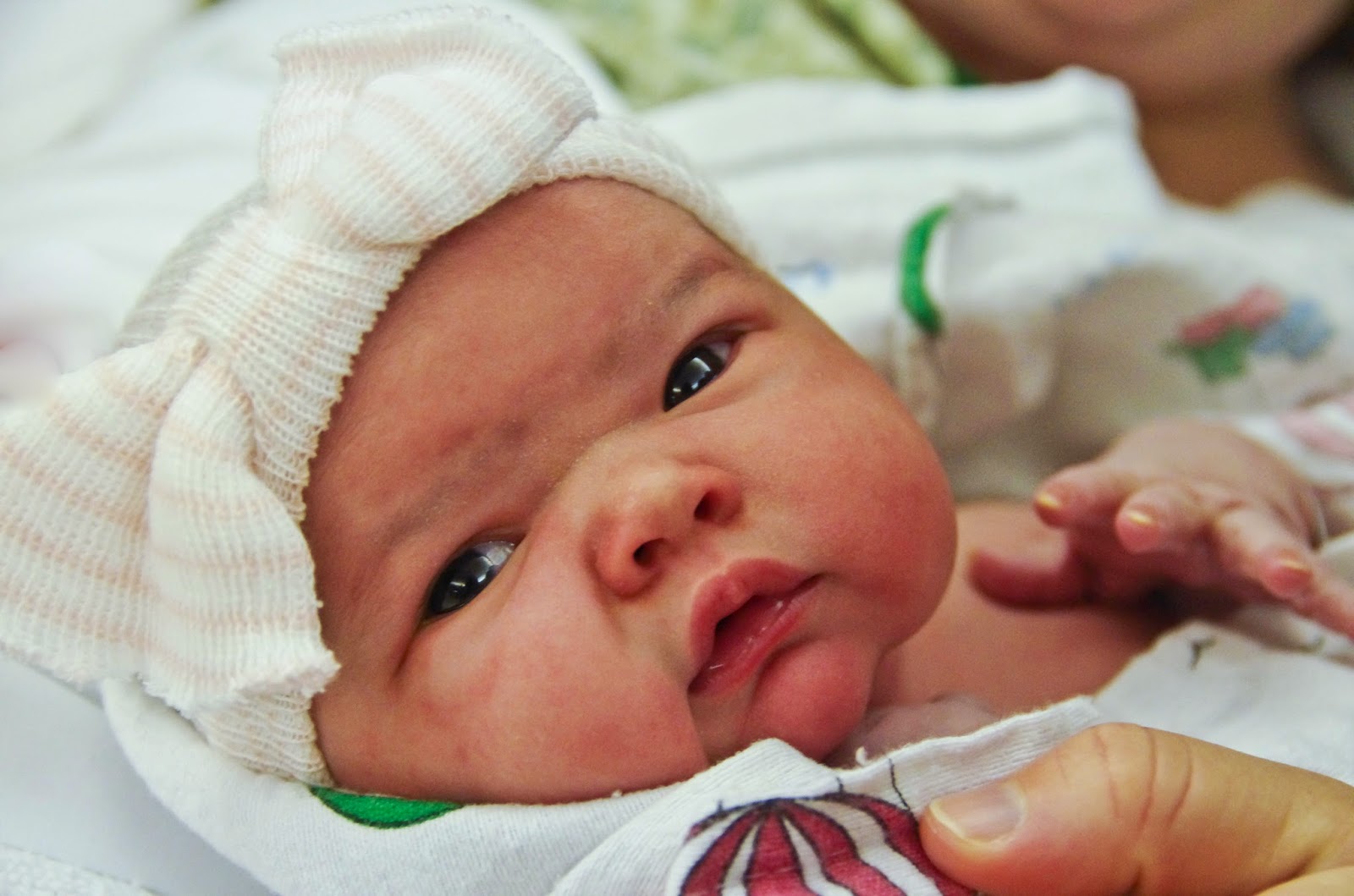 Introducing Lina Louisa!
She was scheduled to be delivered by cesarean on 12/13/14, but God had another plan and Jessi went in to labor on 12/11/14.  Actually she had been having labor pains off and on for a few days.  Finally she was convinced that this was the real thing and we all headed into the hospital.  Sure enough the doctor decided that Lina was going to make an early appearance.  It all happened so fast!  I was pretty excited that once again, I was able to put on scrubs and go into the delivery room to photograph the arrival.  What an awesome experience it was once again.  At times, I got so caught up in things that I had to remind myself to shoot!  The doctor cut Jessi open, and there were a few whispers about the fluid, etc...but it was pretty much quiet as the doctor announced it was a girl as expected and she was really big and healthy.   And then...the cry...it was as if everyone had been holding their breath to hear it.  I looked over at Jessi, tears were dripping down her face.  Ariel was beaming.  It just never gets old.  Every birth is a wonder.  Lina weighed in at 9 pounds 12 ounces!  Just a little shy of being a 10 pounder.  I can't believe it, she sure looks tiny to me.  Josiah, Arianna and Grandpa waited for us in the labor room and both kids were beaming and jumping up and down as they wheeled Jessi and baby back into the room.  Both kids just adore her.
We were able to keep them overnight for the two nights Jessi and Ariel were at the hospital with Lina.  That was so fun for us to have them for so long all to ourselves.  Each day we would take them up to see Mommy, Poppy and Lina and then it was so fun to bring them back with us again.  Saturday night they were picked up by their parents on their way home from the hospital.  The house was so quiet.  We started putting things back in place.  I just loved what I found on one of the Nativity sets.  I have three of them and the kids love to play with them.  Arianna especially likes to feed the animals and have everyone, including the animals lay down to nap.  Anyway, I am not sure who did it, maybe it was both of them, but I just had to smile when I found one of the Nativities  looking like this... 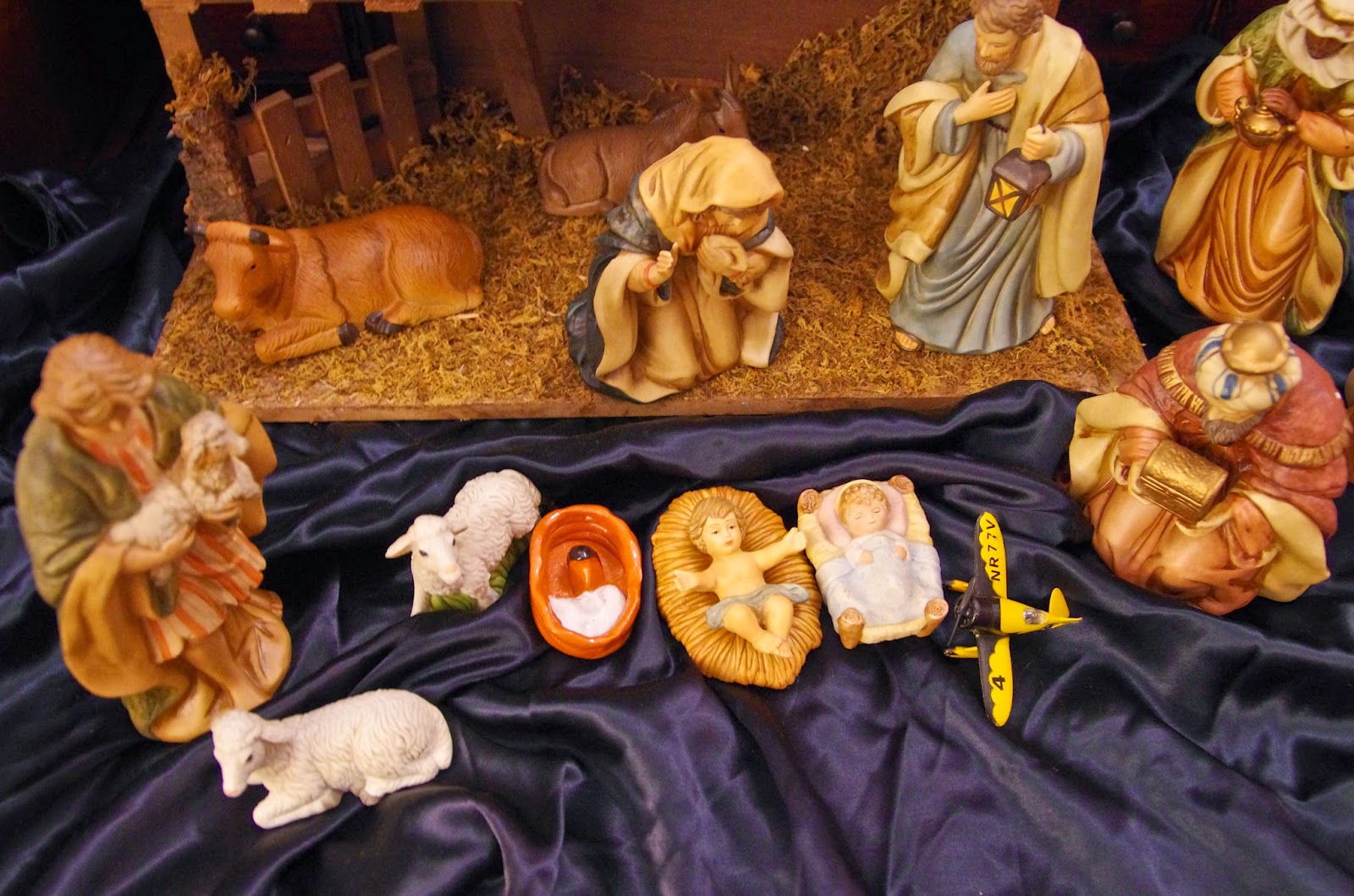 We have been busy going back and forth to see if there is anything we can do to help them all adjust and get in a few cuddles with the new little girl.  Today, we took them to the mall to visit Santa.  Jessi had them wear the little Christmas outfits I bought them a few weeks back.  They were a hit as we paraded into see Santa. 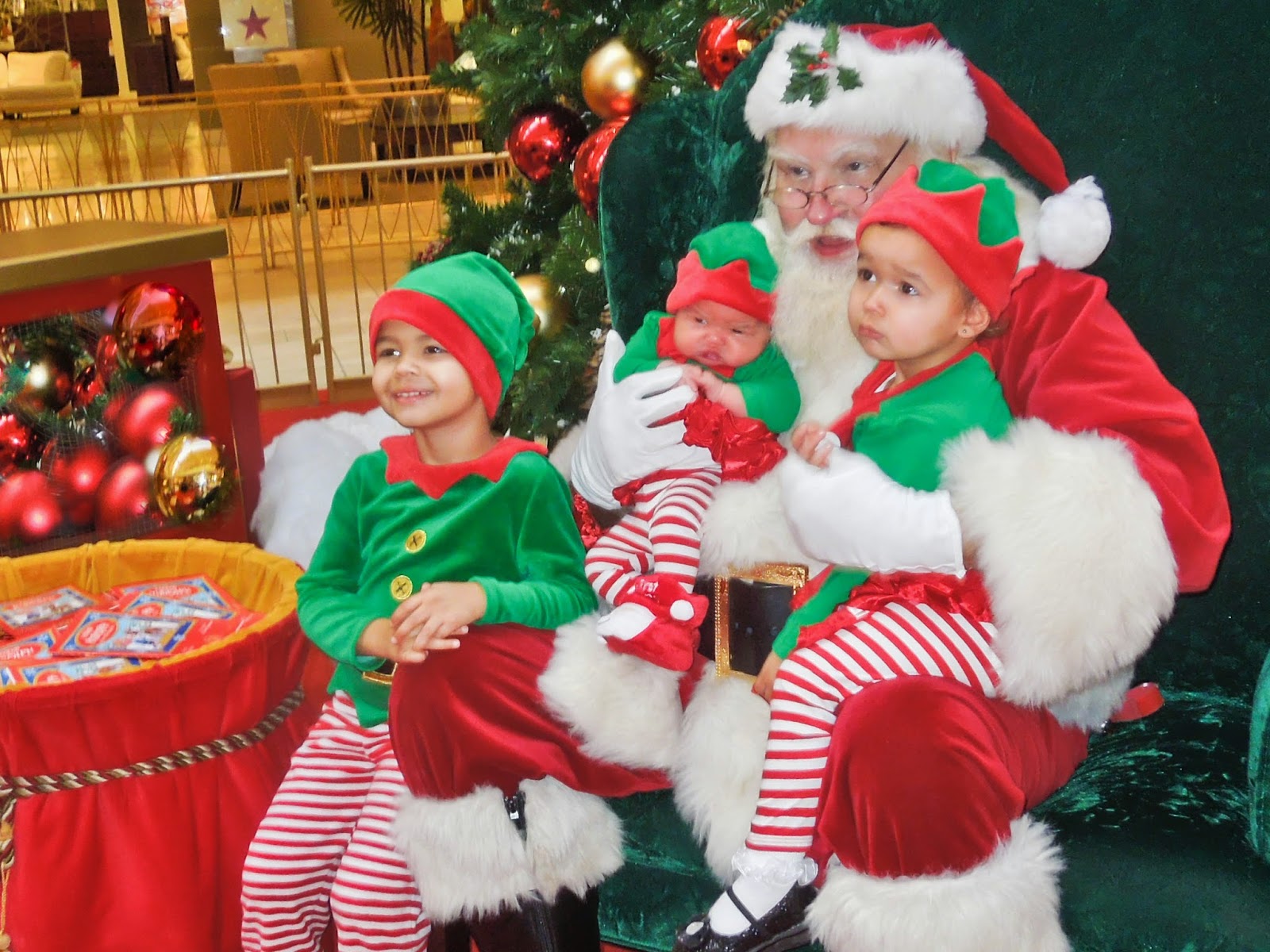 The girls dresses don't quite show up in this photo, but they have the cutest little red fluffy skirts.  I hope Josiah will not take it out on me too hard someday when he looks back at this outfit. 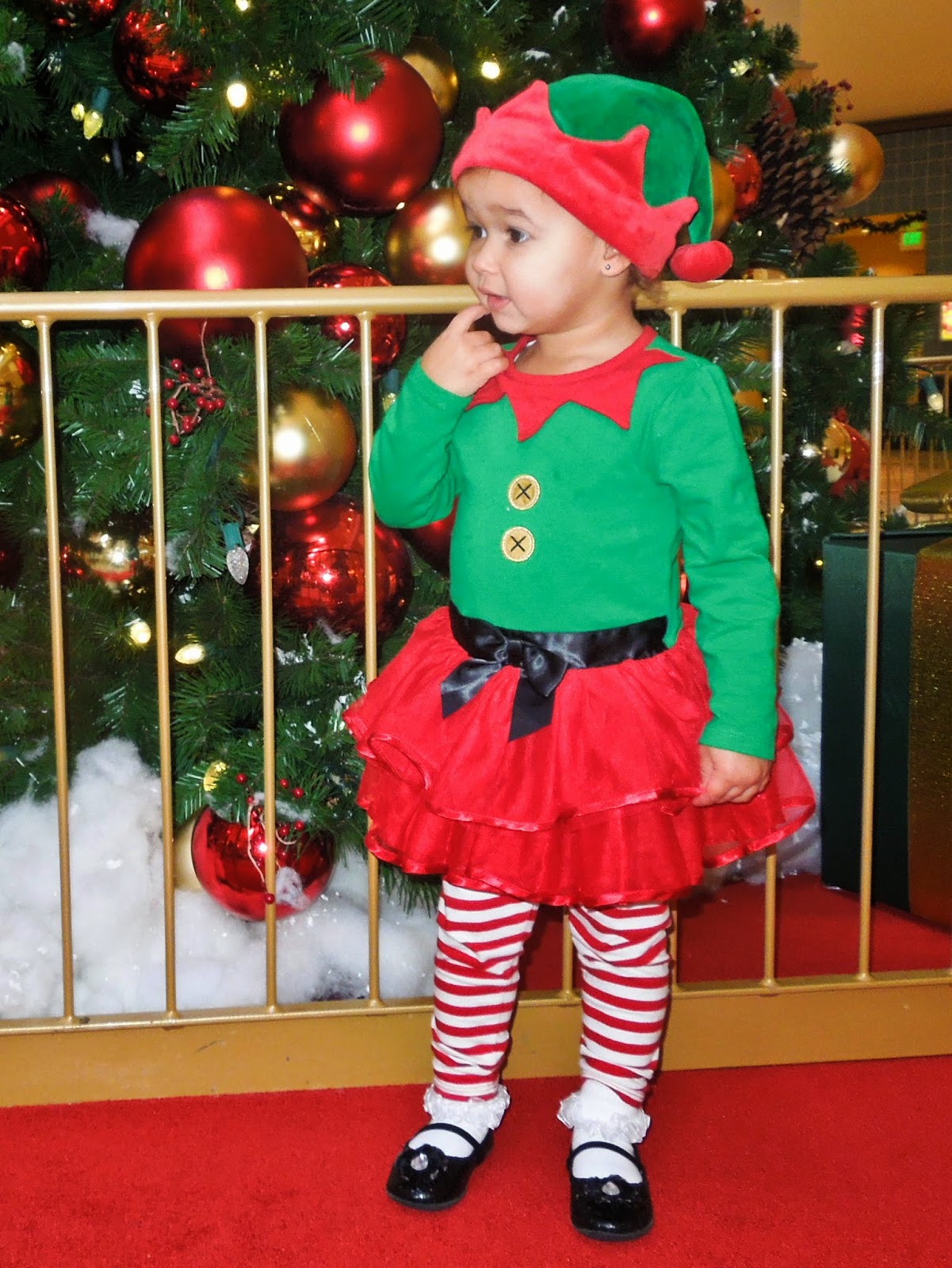