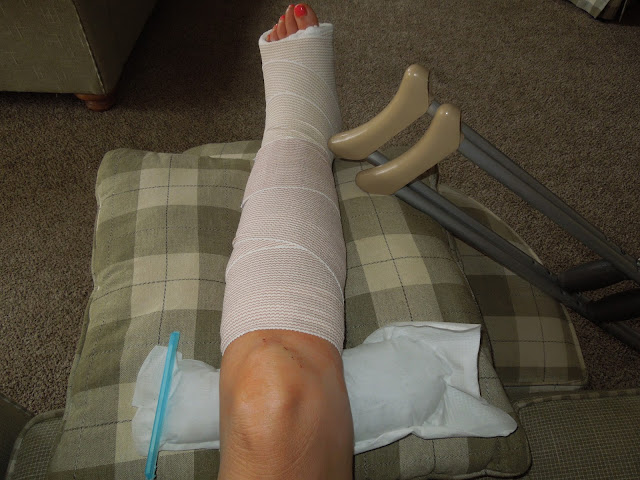 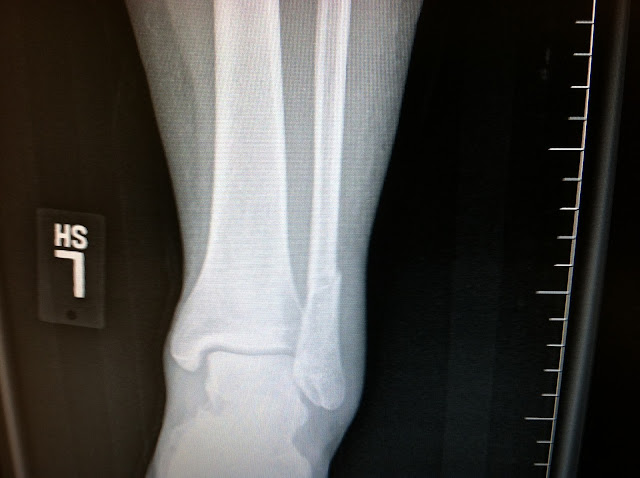 The doctor put a plate on the fibula to hold the two broken bones together and then a screw from the fibula to the tibia to hold them together.  I don't know if I will need to have them taken back off or if they will stay with me forever.  It kind of creeps me out to think of a hunk of metal being attached to my ankle from now on.
My biggest challenge?
to let others take care of me.
I have been waited on hand and...wait for it...FOOT!  (of course you saw that coming.) It is so hard to let others wait on you!  It has always been MY job to take care of home, kids, meals.    John will not allow me to do anything but hop from the sofa to the bathroom and back again, he makes sure to get the ice on and off, he brings me meds and food and water, pumps pillows, and gets really irritated at me if i even try to do anything on my own.  He even races ahead of me to make sure to turn the lights on for me before I enter a room.  It is like I am suddenly a celebrity.
Then there is Jessi bringing over dinner every night, complete with dessert!  She is cooking dinner for her family, plus us, then drops it off on her way to work!  It is hard to accept.
Second biggest challenge?...the stairs.
The bedrooms are all upstairs, the sofa is a loveseat, so you can't fully lay down on it.  I have to go upstairs for a bed.  I have not figured out how to get up them with the crutches yet.  But I have figured out a pretty good method to get up without the crutches.  I sit and lift myself up with my arms...one step at a time.  It takes a while, but I get there.  To get down, I sit and go back down on my butt, one step at a time.  At least I am getting a workout on my arms that way.   I make the trip down every morning after my shower and stay down until time for bed each night.

Since retiring, John has decided that he wants to do some hiking.  Of course I don't mind that at all since it gets me out to places I had not thought I would get to shoot photos of before.
They have taken us over bridges... 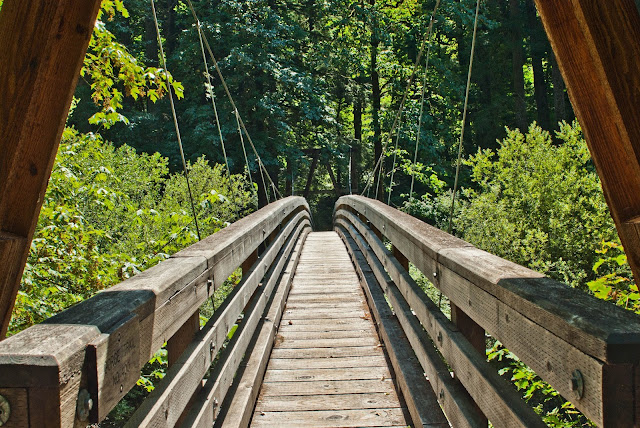 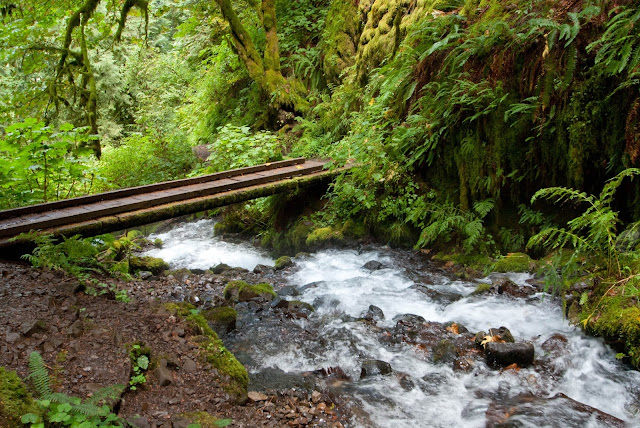 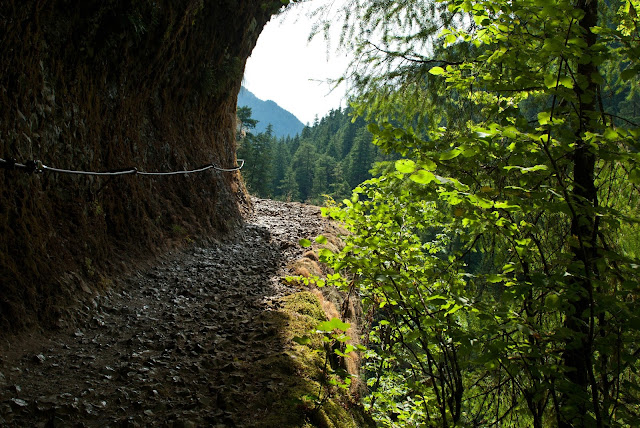 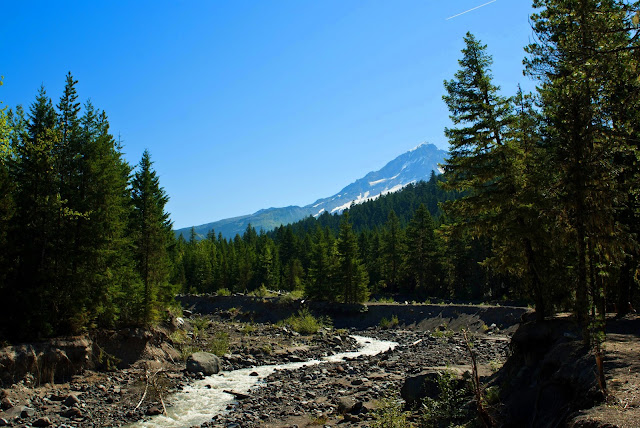 and through the woods. 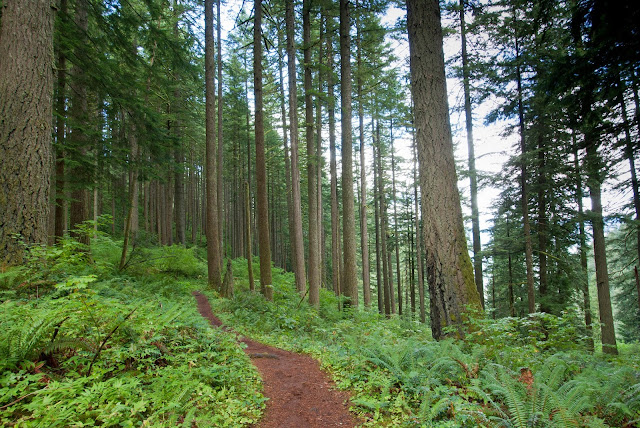 I have seen some pretty amazing sights. 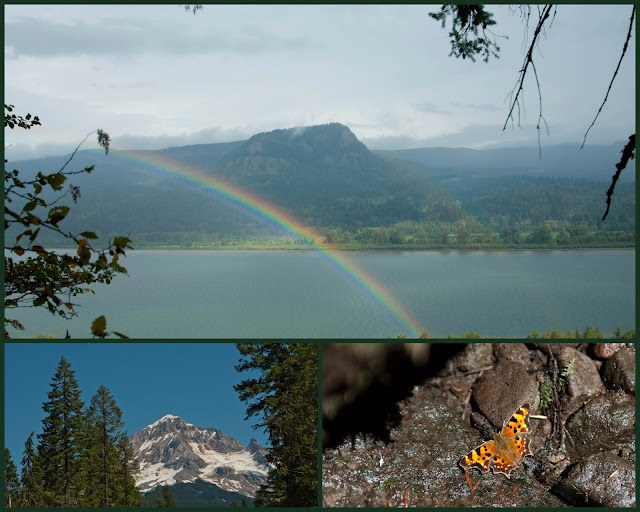 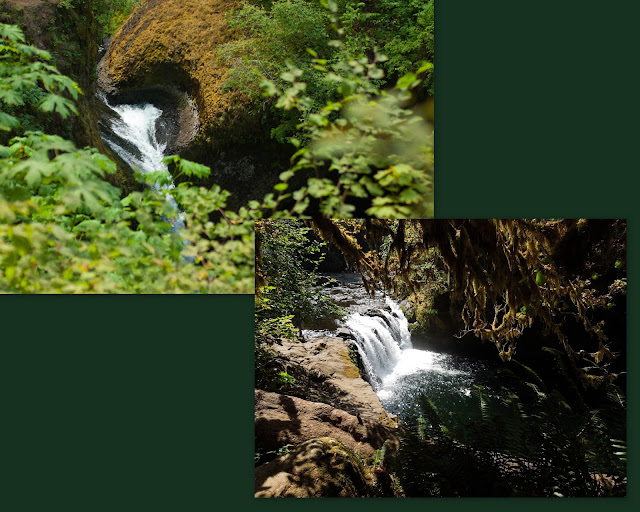 This is Upper Punchbowl Falls and then a view of Lower Punchbowl as we hiked on down and then the view of Punchbowl from the bottom.  It was a weekend and the place was so crowded.  I was disappointed at first because I was going for that postcard look with no people, which was impossible that day.  But once I got home and saw this set of photos, I realized that the kids in this shot really added to the look of it.  I like the summer feel to it.  We will hike back on a weekday next time and maybe then I will get that unspoiled shot, but in the meantime, I am pretty happy with the version I did get. 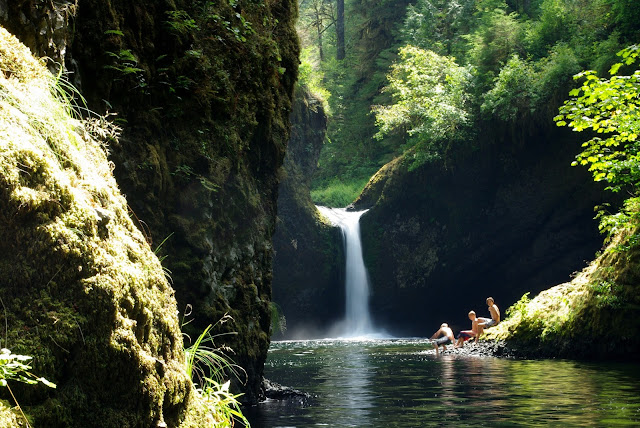 Then came Ramona Falls, up on Mt. Hood.  It is a hike I for sure want to do again.  The whole hike was so beautiful, not just the destination, walking in along a creek was so tranquil.  It is a popular trail for horses too. 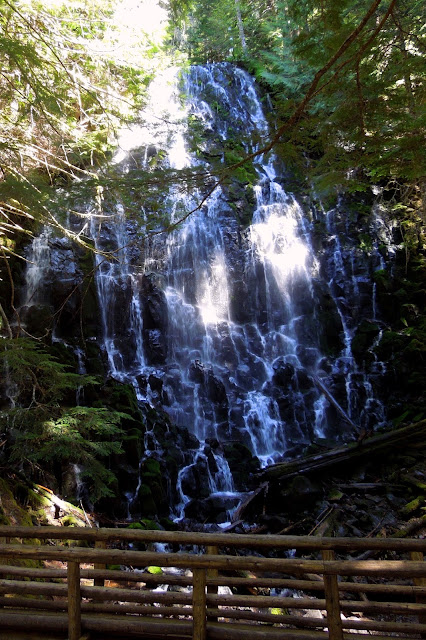 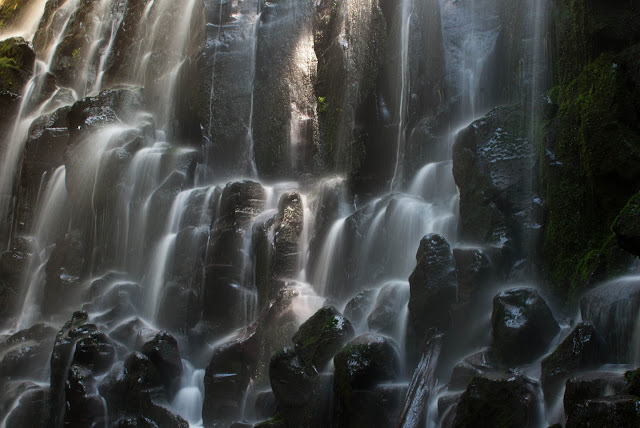 I really love the black rocks with the white water.  The green moss is the topping on the cake. 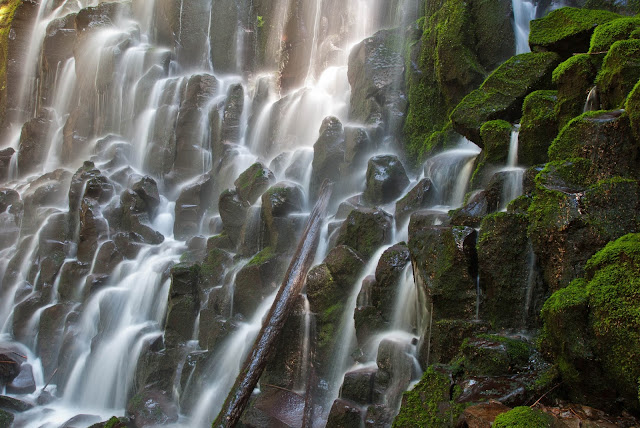 The next was back up to the Columbia Gorge for Wahkeena Falls. 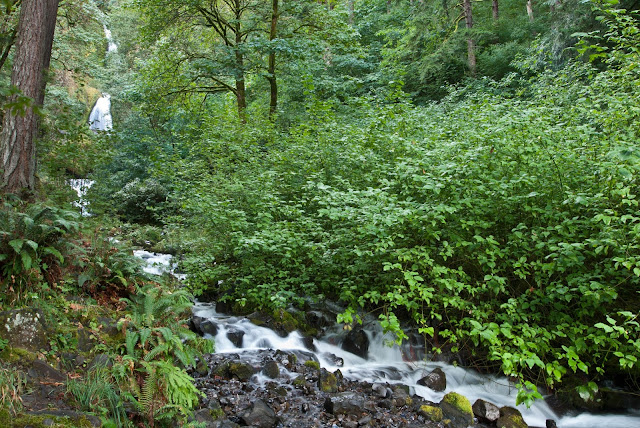 Above is the view from the bottom before we began the hike and below is part way up. 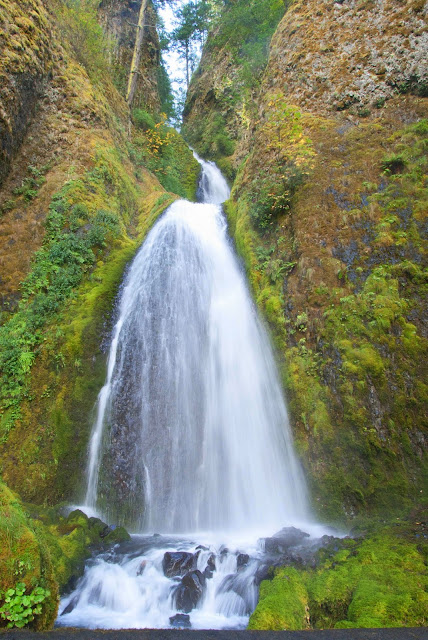 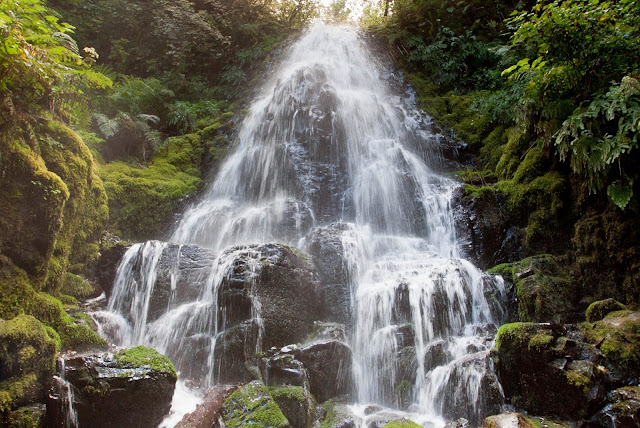 We continued on up the trail to Fairy Falls.  It was so pretty and delicate, reminding me of a smaller version of  Ramona Falls. 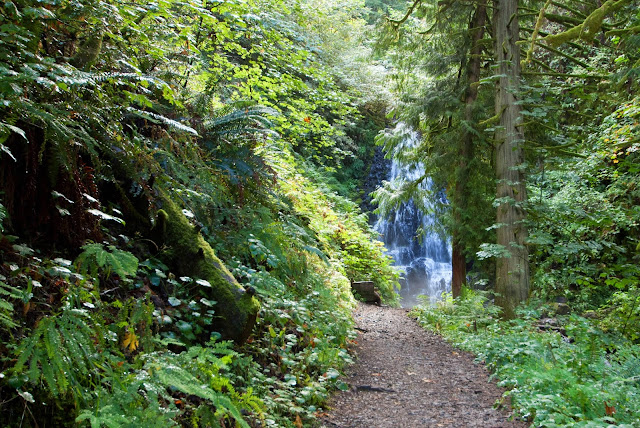 There is an old bench up there to sit a while.  Not sure if you can see it there beside the trail.﻿ 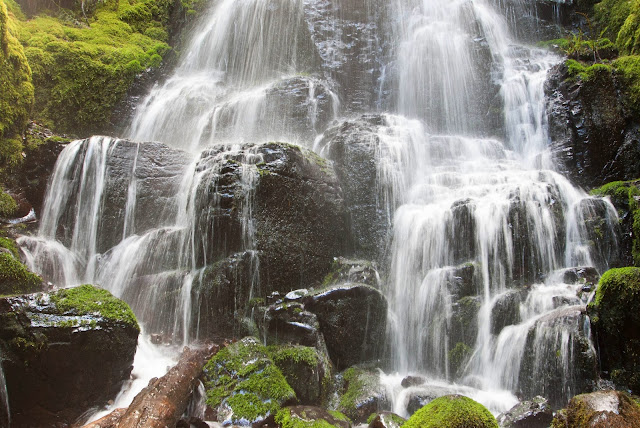 On my list was Wahkeena Springs, so we continued on.  I am not sure what happened, but we never saw the sign for the springs and we kept on going and going...until I finally found a sign...but it said...Angel's Rest.  From my little map, I knew we had gone way too far, but, oh well, I wanted to see Angel's Rest sometime anyway...why not now? 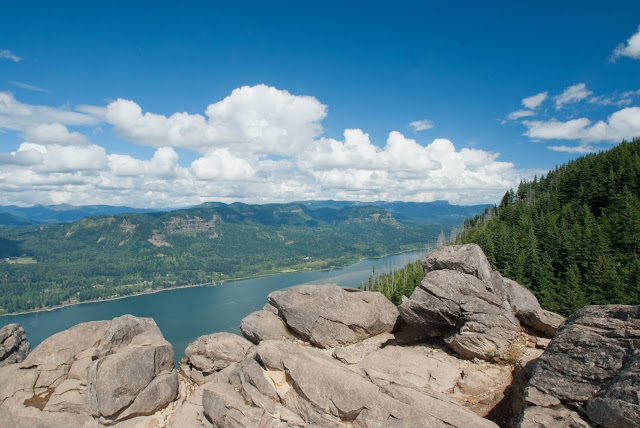 The view of the Columbia was so worth it from there! Here is a view towards the east and then to the west. 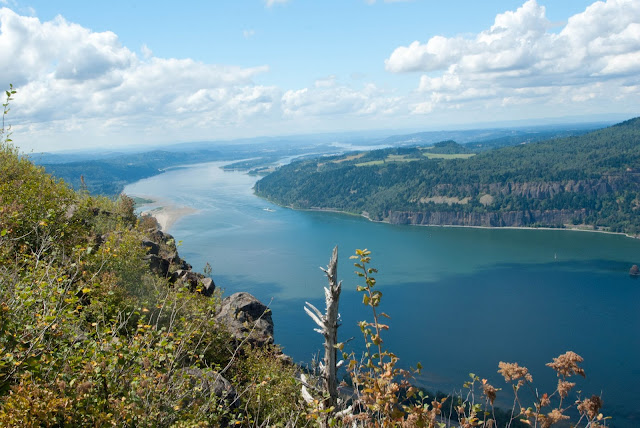 
Continued up to ..you got it...Ponytail Falls.


Just as we arrived at the cave behind the falls, it started to pour down rain, at first I thought it was just mist from the falls.  We waited it out...about 5 minutes and then continued on up the trail.  The higher we climbed, the sunnier it got.
Next stop on the trail was Middle Oneonta Falls. I had hoped to find the hidden trail to Upper Oneonta Falls, but it remained hidden to me, even though I had a map to the secret trail, I could not spot it.
The final falls on this hike was Triple Falls.  So worth the climb!!!
We continued on up to the top of it and past it along the creek.  Sometimes I find that the creeks leading into the falls are equally as beautiful as the main event.
I love the quiet the calm and peacefulness there.
Love those greens.
And then came the unforgettable fall that I had not planned on...
Yep...I fell.
Ends up I broke my ankle.  I replay it in my mind.  One minute I was walking along looking for a good place for a picnic and the next I was on the ground. The sound of a pop in my ankle replays over and over in my ears. I am happy to report that my camera seems to have survived it all, even though it hit hard on the ground beside me.  After a couple of waves of heat and nausea, I was able to get back up on my two feet and test them out.  It hurt, but it seemed to hold me up, so little by little we inched our way down.  John donned my camera pack and tripod along with his own back pack and lent an arm all the way down to the bottom.  So many nice people along the way offering help.  One girl sacrificed her ice bag to me.  She didn't know that it had already been activated and was not cold at all, but even so, I was so grateful to have it, as it gave me some support on the ankle to hobble along.  We took an alternate, shorter route to the bottom instead of the way we had come up.  When we finally arrived to the bottom, the sign said 1.8 miles up to Triple Falls where I had fallen!  It had taken us 1 hour and 50 minutes to get down!!!
Since I was able to halfway walk on it, I was pretty sure it was a sprain.  We went on home, got some ice on it and I assessed the damages.  It was the first time I took off my shoe since I had fallen.  It was already black with bruising and swollen up about as fat as a foot could get.  A while later, I got John to take me in to Urgent Care to get an x-ray.  I was afraid to wait too long and then find out that I had damaged it worse by waiting too long to go in.  Sure enough it was broken.  An appointment was made for me to see an orthopedist this morning.  The verdict was given that I will need to go in for surgery next Wednesday.  Not the news I wanted, but if it helps me heal back to normal, then that is what I will have to do.  Bleh!  I don't look forward to using crutches for the next two months!
Posted by Vicki at 10:47 PM 2 comments: 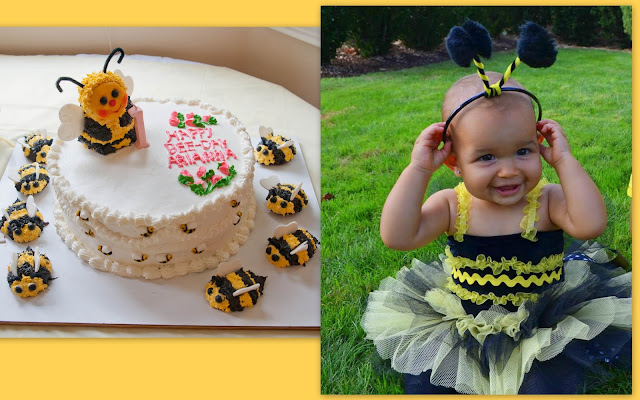 Arianna is ONE now!!!
Her birthday party had a Bee theme.  Great Grandma made a darling bee cake I made her a bee dress.  Jessi went all out with bee decorations and food.
It was BEEutiful!
Posted by Vicki at 3:17 PM 1 comment: