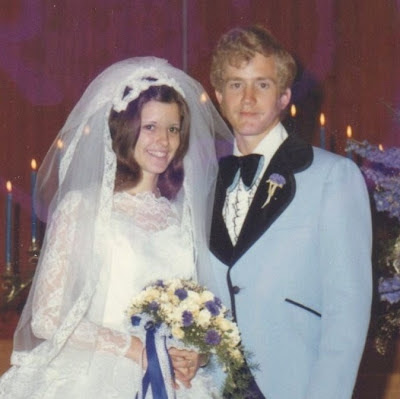 That is a long time…add on the two years in high school that we were ‘together’ and that makes 40.  I am 56…16…I was 16 years old when I first went on a date with him!  We liked each other, he just kept coming over to see me and I stopped dating anyone else and pretty soon, we were ‘going steady’.  By the time I walked in the doors my Junior year of high school I had his class ring, wrapped with yarn to make it fit, on my finger.  It stayed there for a year until he replaced it with an engagement ring.  Yep…by the time I walked in the doors my Senior year I was engaged.  My whole Senior year my focus was on ‘my wedding’.  TWO WEEKS after graduation I was married!  18 years old!  It didn’t seem weird at the time…a lot of my friends had plans to be married, one of them even got married before graduation.  It was just how things happened then.  Some went to college, some went to work, some got married, some did some of each.  40 years later, I would like to say that I (we) have it all figured out, that I know just what to do and not to do to make a marriage work, to pass on this wealth of information to educate the world (at least my kids) on how to make their marriages last, I wish I could…but I can’t.  I have no idea how we got this far.  Some might say…’It was God’s will’…but I know many couples who have strong faith in God who were not able to stay married.  Yes, I know, God wants us to stay married, He said in the Bible that He hates divorce, so yes, He has kept us together, because we had no idea what we were doing or what was ahead.  We were just KIDS!  We knew NOTHING about marriage, it was just ‘what came next’.  Sure we went to the pre marriage class at church, we attended a young married Sunday School class, we went through the motions.  But we really didn’t know what we were doing.  At first it was so simple…ride off from the church on your honeymoon, come home, open the gifts and set up your home….but then…then he goes off to work, begins to feel what it is to be the person responsible for the livelihood of two people…we begin to discover what it is to be with somebody who isn’t always happy to be there,  little by little you discover things you didn’t know about each other, and you even find out things you don’t like and then you begin to think that you can change that, or you get mad that the other person has changed…when really all that has happened is that you are both changing, your relationship is changing…you are growing up.  We grew up…from little kids, to young adults.  Then we got pregnant.  And even more things changed.  He now is trying to provide for a family, and he is working harder and the money is going so quick.  The more he makes the more it takes and the family keeps growing and even though they are awesome and you treasure them and can’t imagine your life without them, they also need to be taken care of and you want to give them more than they can ask for and you can’t.  Sometimes you fake it, other times you think you finally got it right. Then things change again.  You keep on smiling, you keep on praying. The kids grow up, you don’t know how, you don’t know where the time went…suddenly they are the same age you were when you got married…they are dating, they are getting married…and you see them going through what you have and you tell them just hold on.  It is up and down, it is good and bad, it is happy, it is sad, it is funny, sometimes hilarious…it is life…not perfect, but they can be sure of one thing…it will change and I have no idea what is ahead…and I have no idea how I got here…but I am. 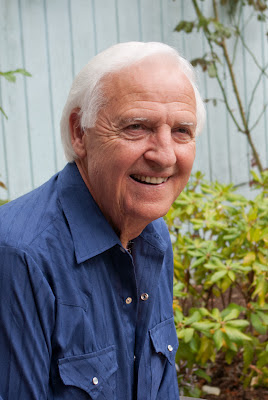 Happy Father's Day!
To MY DAD and the other Dad's in my life! 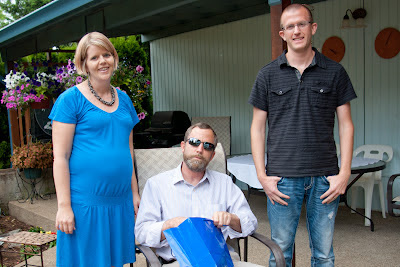 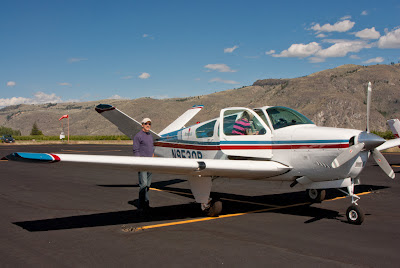 Last weekend, Dan and Cyndi invited us to fly in their plane with them to Lake Chelan, Washington. 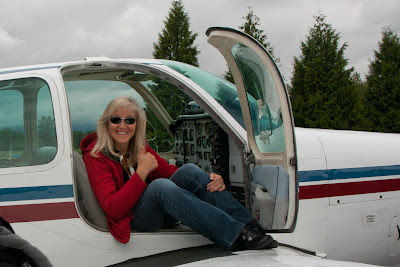 Dan is the pilot and Cyndi is the co-pilot/stewardess. 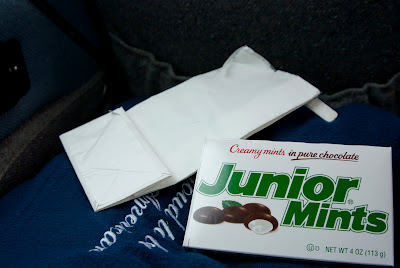 She made sure and attended to our in-flight needs... 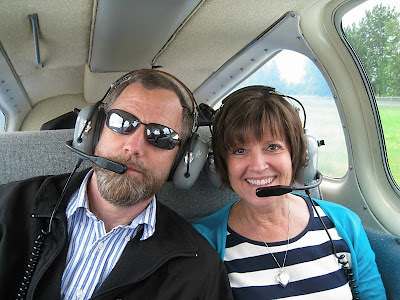 The flight is only 1 1/2 hours.  The weather was a little rainy when we left and so the flight was a bit bumpy going up.  Luckily for me and everyone else, I didn't have to resort to using that handy little white bag, but I  made sure it was close at hand more than once, just in case it got worse.  I tried so hard not to let on to them that I was not feeling so great, they wanted so much for it to be a great time for everyone. 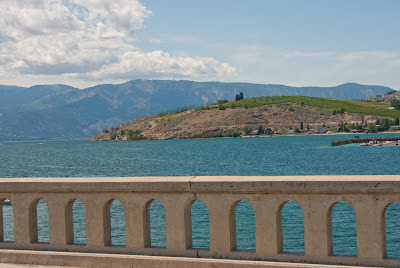 Lake Chelan is gorgeous!  I could not believe how tropically colored the water is!  There are vineyards planted all around it, so the second day there, we rented bikes and rode to a vineyard for lunch. 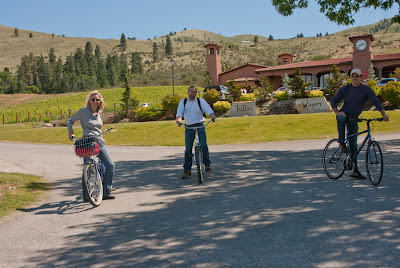 The flight home was amazing.  I had tried not to think about it much.  The weather was sunny and warm and the sky was smooth.  We took a different path home and flew over Mt. St. Helens.  We were able to fly right past the crater and could see a tiny vent with steam coming out.  The sky was so clear we could see all the way past it to Mt. Hood and Mt. Jefferson.  We also had a great view of Mt. Rainier. 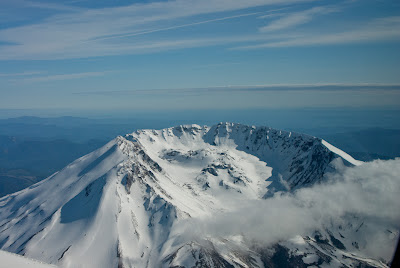 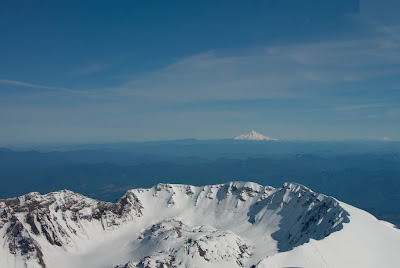 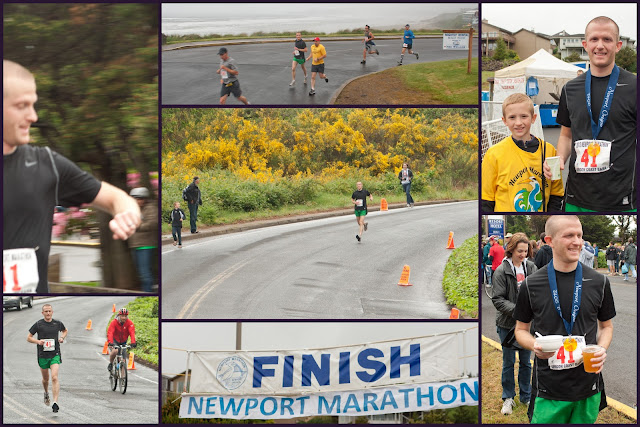 Last weekend was the Newport Marathon.  Yes, I am still going to my kid's events...36 years later, I am STILL as proud of him as I was when he took his first step, stood on his head, said his first word, and ran his first race.  I don't think there will ever be a time when I say I have gone to enough events that my kids or grandkids are in.  No matter how old they get, I am still wanting to be there to watch the event play out and hug them when they are done.  As it was...John ran his best marathon ever!  He finished his 26 mile run in 3 hours 18 minutes, taking 20 minutes off his time from the last time he ran the same marathon!  It was such a fun time.   We had a house rented that is right on the ocean front and the marathon even runs past the house!  So even though he had to get up early to be at the starting line, we stayed at the house, had coffee and breakfast and waited for him to run past.  Then we jumped in the car a couple of hours later and waited for him to cross the finish line.  I love the photos I got...the top center one shows them passing the house, then middle one shows him about to cross the finish line...and there behind him is Rachel running back to the finish line and Joshua is there at the side running along with him...they had gone up the road a little ways to see him sooner.  The shot at the top left with him looking at his watch is a terrible focus, but I kept it anyway because it shows his smile as he looks at his time and knows he did really well.  It chokes me up to know how proud he was and it makes me so happy to see him reach a goal he worked so hard for. The bottom right shows him with his after race snack...WHO ever decided that beer and clam chowder are the perfect after race foods? 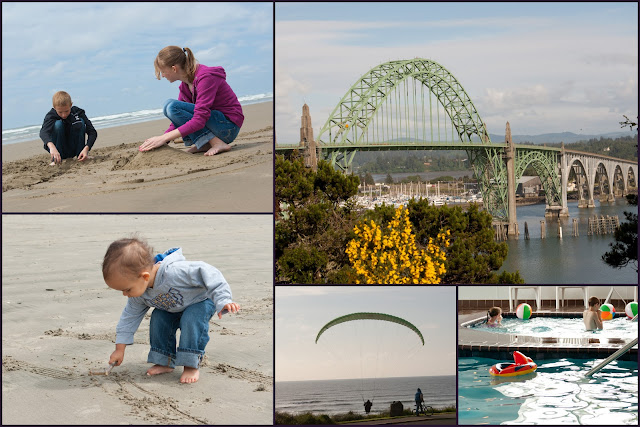 The rest of the weekend was spent playing.  Emily and Joshua showed Josiah all about digging in the sand.     He is old enough now to really get into it with them. (above photos) Sunday morning, some guy decided to para-sail off the little cliff in front of hour house.  They swam in the pool & soaked in the hot tub. 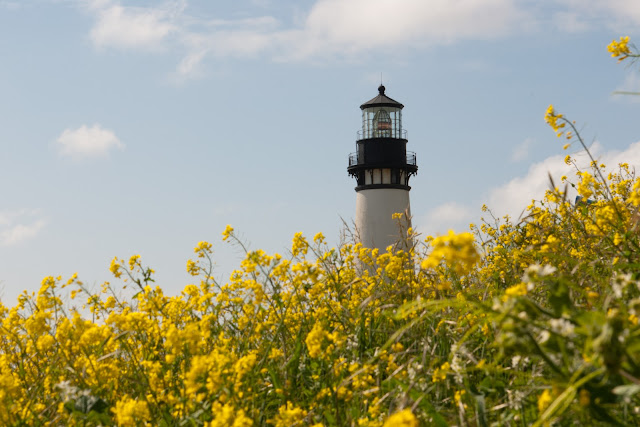 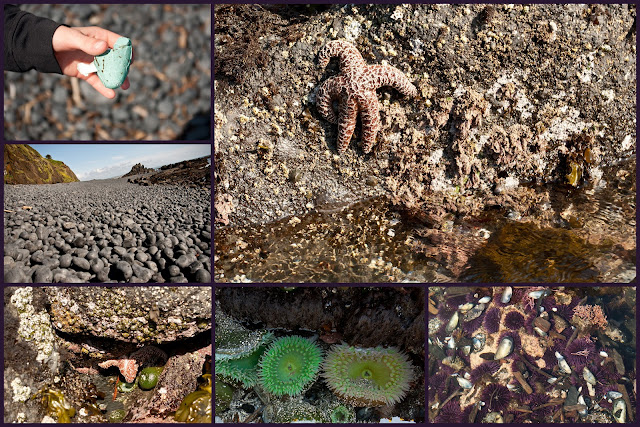 Then we went to the tide pools.  The beach is made up of black smooth rocks, mostly all the same size.  They come from the lava rock behind the pools.  Little by little the tide water rubs the lava wall until chunks fall off, there are rocks in the lava and the tide keeps rolling and polishing them.  The whole beach is made up of them.  The pools were full of anemones and urchins and muscles and starfish.  Joshua found a cormorant shell, it was pretty blue like a robin egg, but really thick. We were there at lowest tide so things were pretty well dried up.  I really like the starfish up top, he is holding on to the wall like he is afraid to get in the water. 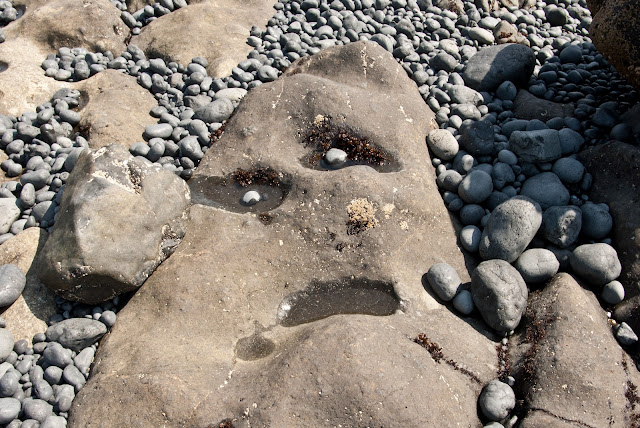 This rock seems to jump out at me every time we go there, this time, I added some pupils to those puddles of water...it gave him extra personality. 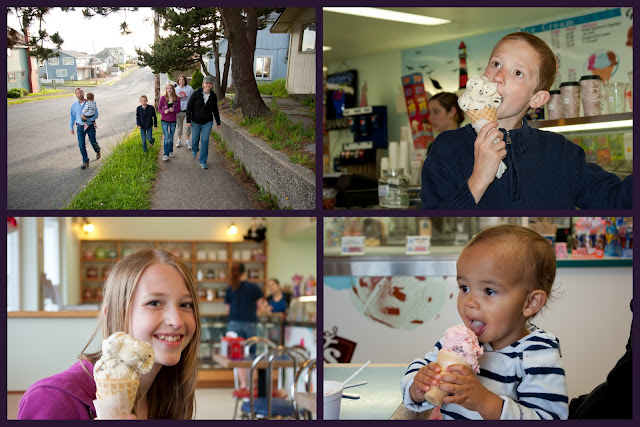 Of course we had to take a walk to town to the ice cream shop. 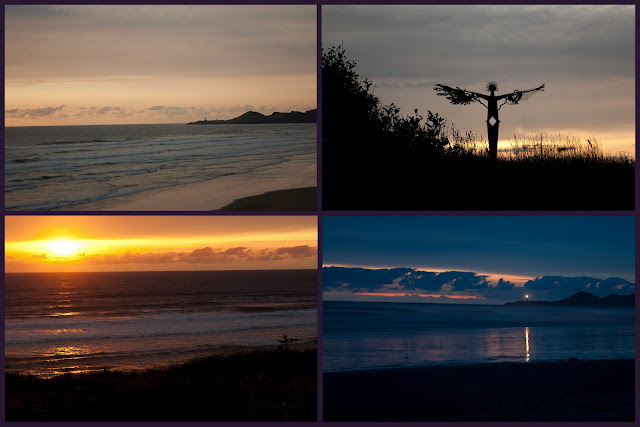 And I got my fill of night shooting too.  Even though the day started out misty, it ended with a beautiful sunset. 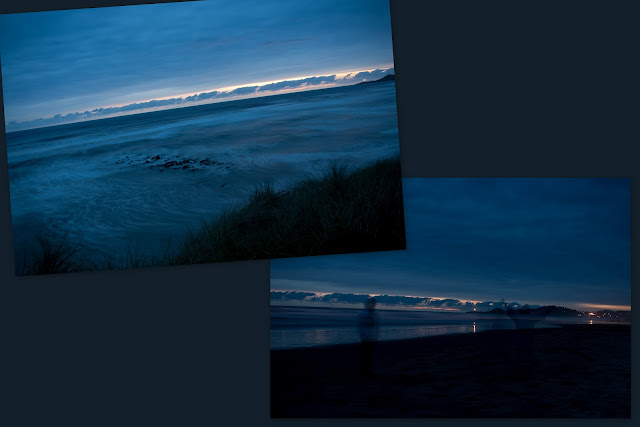 I tried some new techniques too.  Long exposures...there are two ghosts in the bottom left of the shot above...and the same ghosts appeared when I tried out some light painting with my flashlight at the whale bone sculpture in the photos below.  It was something I have not tried before and the kids and I had a lot of fun experimenting.  It was pitch black out, all this light came from the flashlight and natural sources. 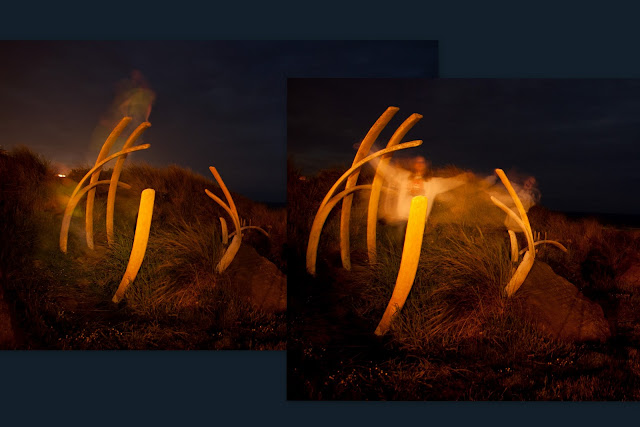 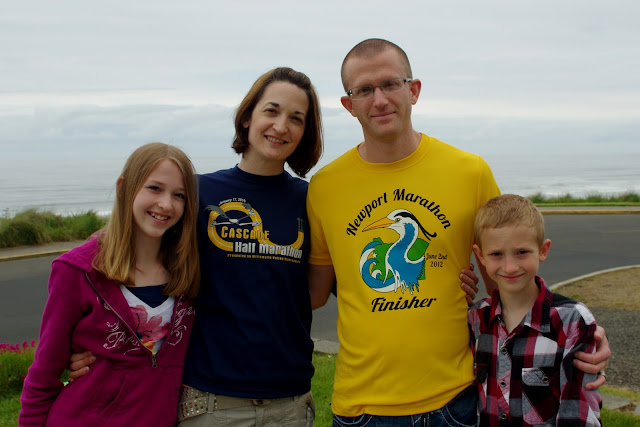 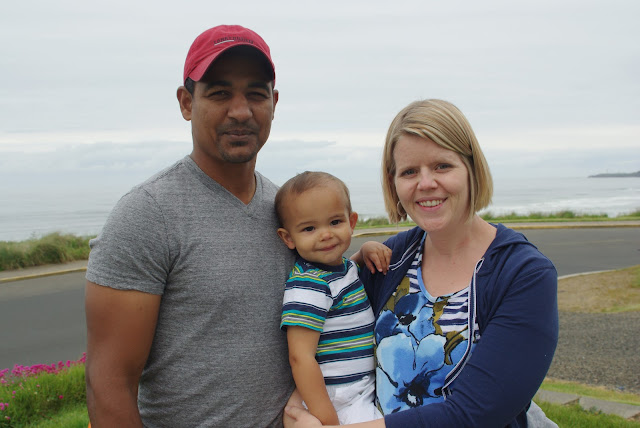 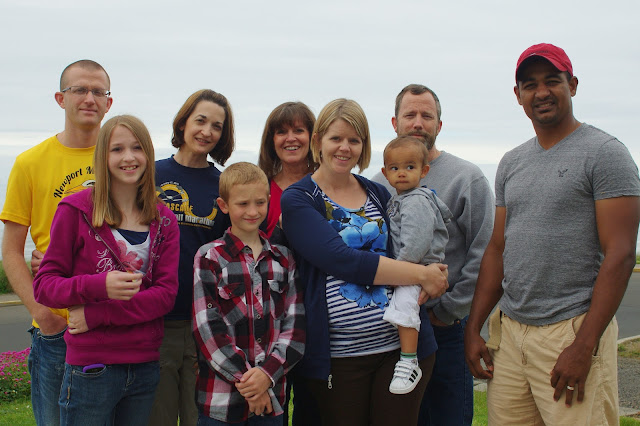 I coerced them into a few group shots before we packed up and headed for home.
Posted by Vicki at 10:51 PM No comments: