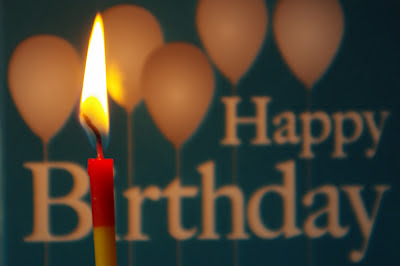 ANOTHER YEAR!!!!
The plans for my birthday did not include a trip to Oxnard.  I was supposed to have lunch with my family and birthday shopping and later on go out to dinner and the next day there were plans for a pedicure and another dinner out.  But sometimes things happen that we can't control and the best made plans are set aside as we move ahead with another plan. 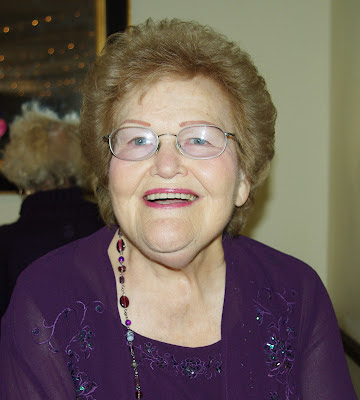 The Sunday before my birthday, we got word that our sweet friend MaryJane had died.  We flew down with John's parents. MaryJane has been best friends to my mother-in-law for 70 years or so.  They lived next door to each other, sometimes they lived with each other, they grew up together, got married and each of them had 8 kids, almost to the year.  She was as close or closer than family to the Dixons.  Of course I met her way back, but it was not until the past 10 years that I really got to know her.  She was genuine. She had the sweetest smile and was sincerely caring for those she knew.   Everyone was welcome in her home and you better be ready to have a meal! She was so fun to be with and always made you laugh.  She loved to plan parties and go on cruises.  She was not afraid to tell it like it is and I guess that is why so many laughed because not many people have the confidence to speak it as they see it.  You knew where you stood.  I know, when people die, everyone goes around saying all kinds of good stuff about them.  Well, the things they said and remember of her are so true, I know that so much was left out. This woman was definitely an inspiration to me! 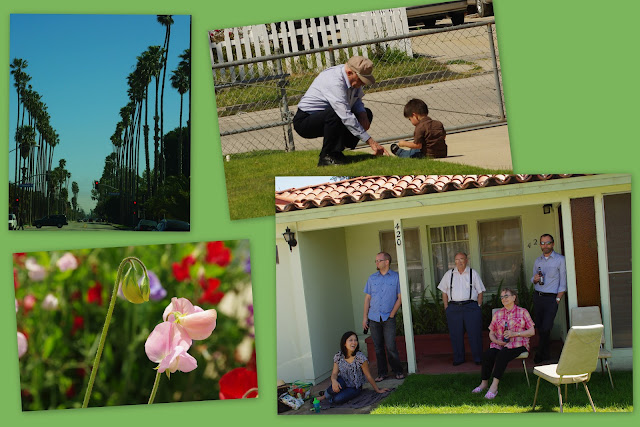 We stayed at Uncle Jimmy's place, a home that his grandmother lived in before he was born.  It began as a tiny garage, then little by little it was added on to as the family grew.  He even built on some of the rooms himself when he took over ownership.  I also took a picture of the palm trees that line the street by his home.  They are nearly 100 years old.  Since we were so close to them, Dennis and Abby and Gabe got to spend time with us while we were there too. Abby came down alone with Gabe the first day while Dennis was at work and they all came back again the next day. 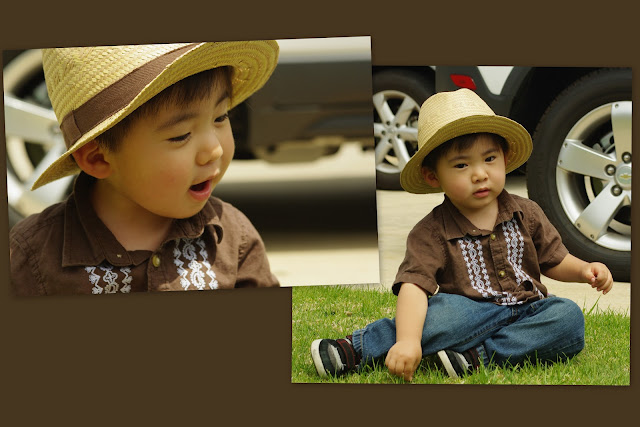 On Sunday we all drove up to Winnetka and had a barbecue at their place. 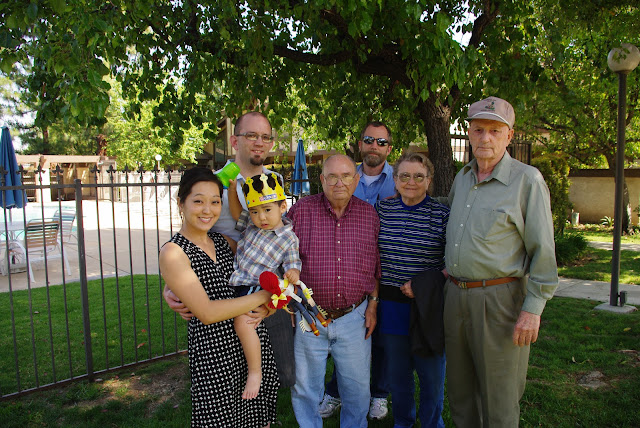 So even though it was not the birthday I had planned it ended up being a celebration of life. The life that MaryJane lived, her example to live it to the fullest.  The reminder that we are all growing older and we never know when it will be our time to go.  What will I leave behind? What memories will others have of me when I am gone?  A reminder to not put off what needs to be done while I am still here to do it.

HE AROSE!
Do you see the head profile at the left hand of this photo?  I thought it looked like a face looking heavenward in awe, with a little puff of breath coming from the mouth as Jesus disappeared into the sky. 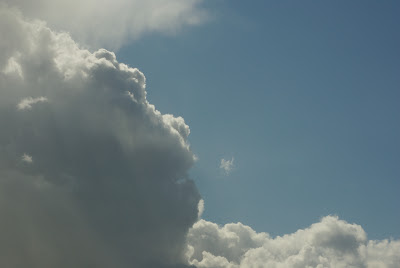 We celebrated Easter a little different this year.  Dennis and Abby and Gabriel drove up to Medford and meet John and Emily and Joshua and John and Me. The kids all listen to sermons on CD by Jon Corson, the pastor of Applegate Christian Church.  His church is near Medford, so the boys thought it would be really nice to hear him in person for Easter.  Rachel had a huge pile of homework from her first week of Master's studies to deal with, so she took advantage of a quiet house while the family was gone, even though she really would have rather gone too.  Jessi and Ariel  decided that it was too long of a drive for Josiah for such a quick short amount of time, so they didn't go either.  But the rest of us met up on Saturday afternoon, had dinner together and stayed up late talking.  The next day we had breakfast and off to church it was.  John and I headed home and made it in time for the usual dinner and  Easter Egg Hunt at my parent's place. 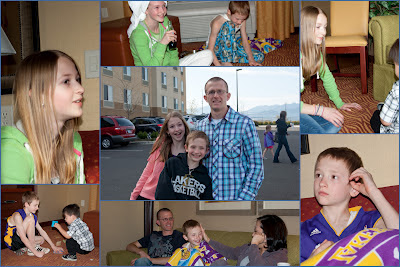 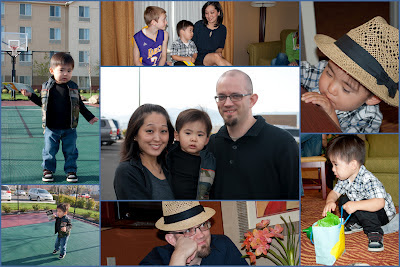 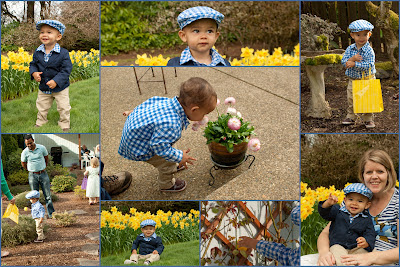 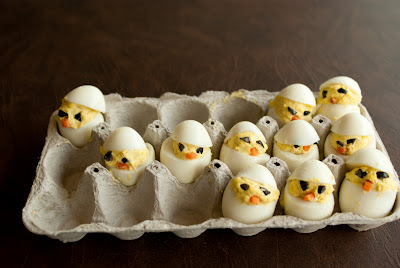 I made these little deviled egg chickens instead of the usual deviled eggs.  You can probably guess that I found the idea on Pinterest. 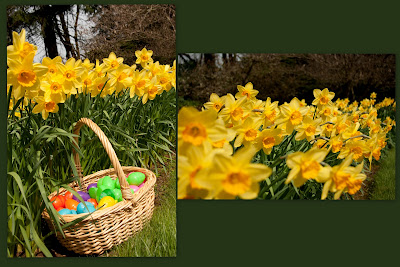 Mom's daffodils are always so pretty! 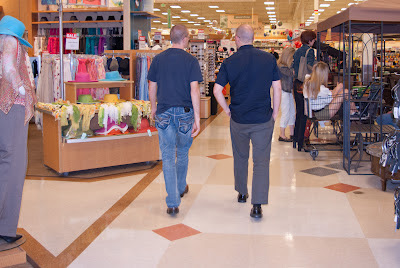 Every now and then it just hits me at how much time has past since my kids were little...that happened to me on Saturday when we went to pick up a few things at the store.  Emily and I were walking behind John and Dennis and I looked up and realized that my little boys were MEN!

Here are a few of the other sights from the weekend. 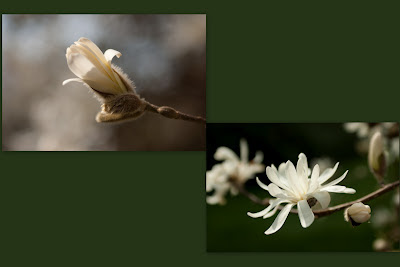 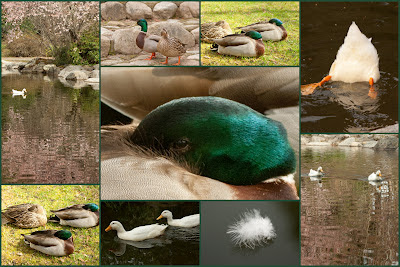 Ducks...one of my favorite birds...we found a whole pond full of them, it was so pretty with the cherry blossoms reflecting on the water. 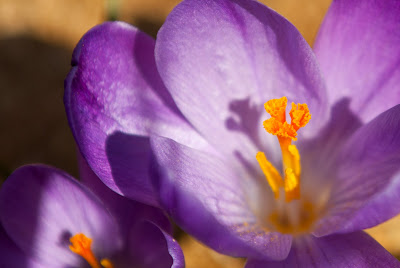 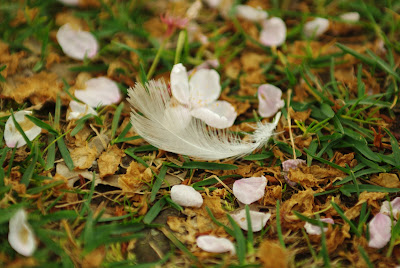 I am not sure how it happened, but I just love the bubbles on that drinking fountain below... 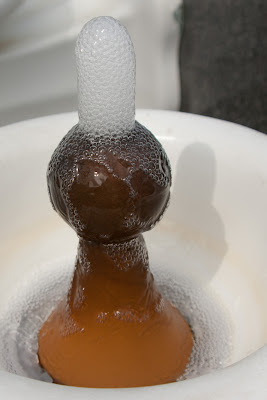 I hope your Easter was full of blessings and good memories too!
Posted by Vicki at 8:06 PM No comments:

My latest little find has been PINTEREST.  http://pinterest.com/
It could be really addicting, but so far, I have managed to keep myself reigned in.  It is hard to describe what it is all about, I have tried and to those I have told about it, they just don't get it.  I guess it is just something you have to check out for yourself to see what I am talking about.  There are pictures, you can click on the picture and see the recipe, knitting project, book, funny quotes, travel destination, craft idea, fashion, decorating, remodeling, it is ENDLESS the ideas people have pinned there.  If you really like it and want to save it, you 'pin' it to your 'board'.  You make 'boards' of anything you want to name them so you can save them in files and come back to them when you want to.  You can go and see what others have pinned and pin from their boards into yours.  Anytime you are surfing the Internet, you can 'pin' a photo or idea from there.  (sometimes you need permission)  You can pin your own stuff too.  It is really easy to figure out.
So I know, I just didn't quite relay it right, so just go see.
Here are a few things I have pinned along with a picture of my version of it when I tried it. 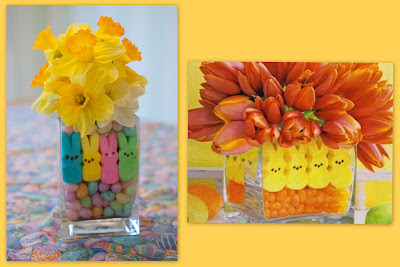 right is my version, different, but I still liked it. 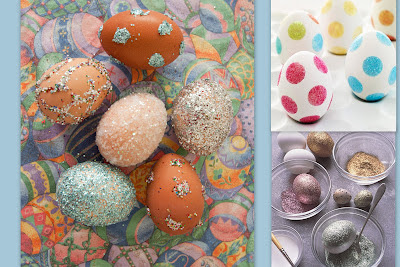 my finished glitter eggs...glad I tried them, but they were terrible to peel and got glitter all over the egg once it was peeled.  I guess it would be best to blow the yolks out and glitter the shells only 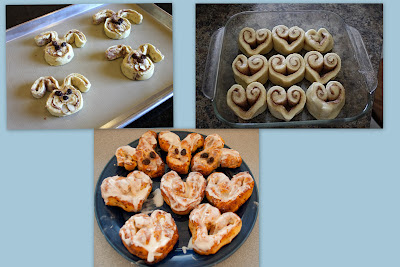 The Pinterest version of these cinnamon rolls was way cuter than my version.  But the grandkids liked them anyway.  It used canned cinnamon rolls, really quick and easy. 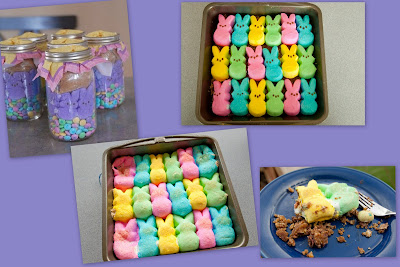 Easter Bunny Peep S'mores. I thought this idea was so cute for a gift, but it was even better just as an Easter recipe. The original version was so sweet, even the grandkids said it was too rich.  I cut down the sugar and it was better the second time around.  I will use this again for another holiday that they have peeps.  I think I saw some ghosts and pumpkins at Halloween and something Christmas too, but who really needs a new recipe at Christmas?   Here is the recipe if you want to try it.

Easter Bunny Peep S'mores
1. Reduce 1 sleeve graham crackers to crumbs, mix with 2T brown sugar. Put mixture in a baggie and secure shut. 2. Pour 1-1/4 cup Easter M&M's into quart jar. 3. Place 8 marshmallow bunny peeps standing up, facing out around the inside of the jar. Press them up against the glass, but don't squash them. 4. Place baggie of crumbs on top.  Place lid over it all.

Attach a gift tag giving the following instructions:
1. Empty the jar contents into a bowl. Snip the bunnies into bits with kitchen sheers or cut up with a knife. Return the bunny bits to the mixture. Mix well. 2. Melt 1/3 cup butter; add 1 teaspoon vanilla. Pour this over the dry ingredients, mixing well. Pat into a greased 9" square pan. Bake at 350 degrees for 15 minutes. Cool and cut into bars
For my recipe at home, I used 18 bunnies and left them whole.