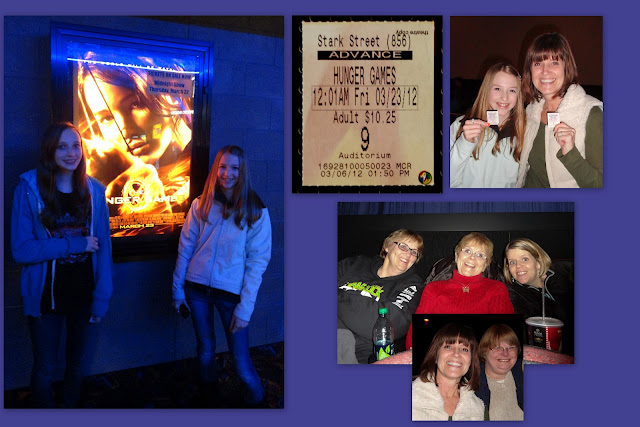 THE HUNGER GAMES
As with the Twilight series books, which I just did not think I would like, but was persuaded to read and then was amazed at how much I liked them, I was again persuaded to read another series called The Hunger Games.  The first book in the series was so captivating that I could NOT put it down, I read and read and READ and finished it in ONE DAY!  I could not wait to get my hands on the second and third books.  They were good, but not as good as the first one.  Then began the countdown to the movie premier.  Almost everyone I know has read the books, including Emily and so I told her that I thought that we should get a whole bunch of us together to go see it when it came out as a movie.  A couple of weeks before the premier date, she called me.  "Grandma...don't you think we should go see the midnight showing so we can see it as soon as possible?"  My answer was of course..."YES!"  We had quite a group... my grand daughter, her good friend, me, my daughter, my friend, my sister AND MY MOM!  Yes, I think we were the only adults in the room.  We showed up about 2 hours early, even though we had tickets already in our pockets, we wanted to make sure and get seats together.  With all the cold and snow we have had, we bundled up and were ready to hunker in and tough it out to get a place.  To our surprise, the theater let everyone wait inside...and not just inside, they had the auditoriums open and ready for us to wait in our seats.  8 auditoriums were showing a midnight Hunger Games!  Jessi and I went and looked and every one of them was full!
Now, normally when you read a book and then see the movie, it is a little bit disappointing.  But this time, I am happy to report, they really did a great job.  The actors really were close to what I had pictured in my mind and even though they had to cut a lot of the book out to make it fit into a movie time-frame, it was a good job of keeping with the story line.  It was one of the best book made movies I have seen!
Emily and her friend got to stay the night, as well as Joshua who had not gone to the movie, but had stayed home to keep Grandpa company.  It was a short night, we didn't get home from the movie until about 3am.  After sleeping in we celebrated with a special breakfast and I drove them back to Salem.  I could hardly keep my eyes open on the drive back home alone.  Maybe I am too old for this kind of thing...but don't tell Emily!!!
Posted by Vicki at 8:03 PM No comments: 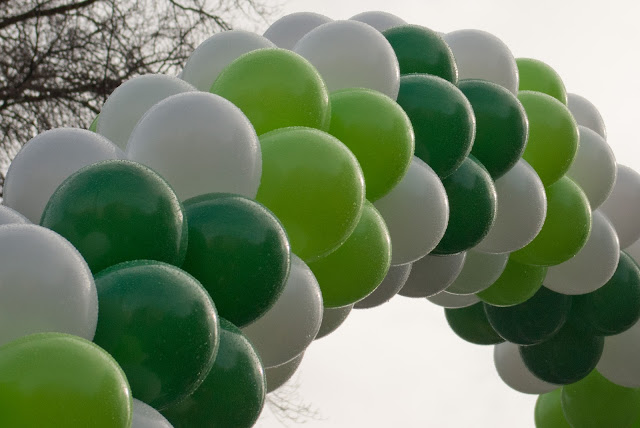 Lindy and I walked in the Shamrock Stride for St. Patrick's Day.  It was predicted that we might have snow so we bundled up and prepared for it, but we made it to the finish with only a couple of drops of rain on us.  It is a fun event to be in.  A fundraiser for the Doernbecher Children's Hospital. All the participants dress up in green.  There is a 15k run, an 8k run, a 5k, the 3.5mile stride that we did and a leprechaun lap for the kids to run. Of course we had to do it with our maiden name being McCOOL!  And YES, it was COOL and WE ARE COOL! 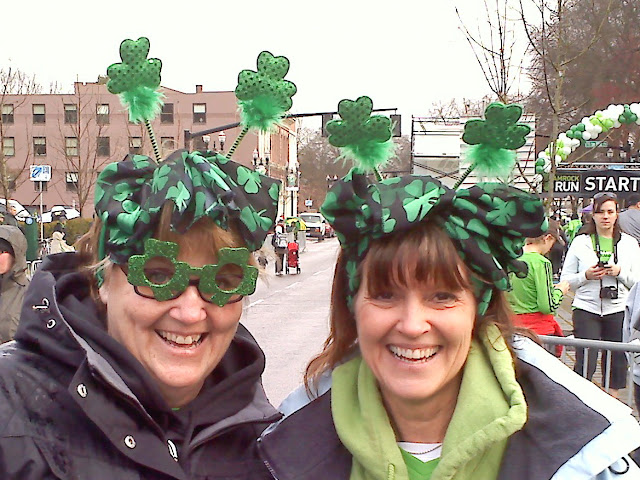 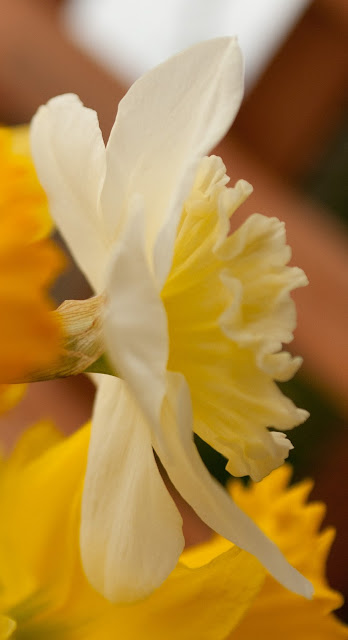 Spring has arrived!  But nobody has told that to Spring!  After a winter of barely any snow, we have woke up to snow every morning this week!  One day we had so much hail it piled as high as snow and lasted all day and was still here the next morning covered with the night's snowfall. 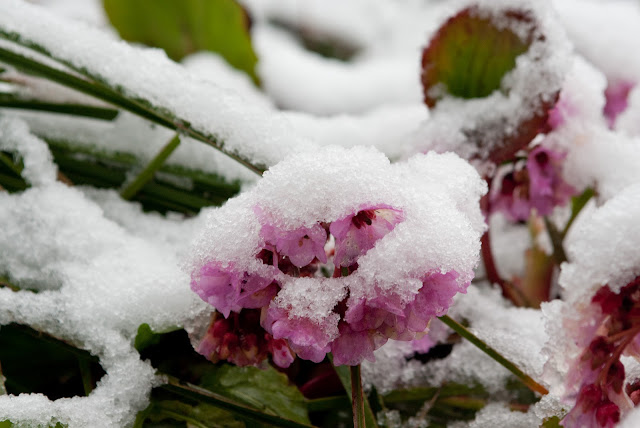 It is pretty rare to get flower and snow photos, so I have been taking advantage of that.  Kinda pretty huh? 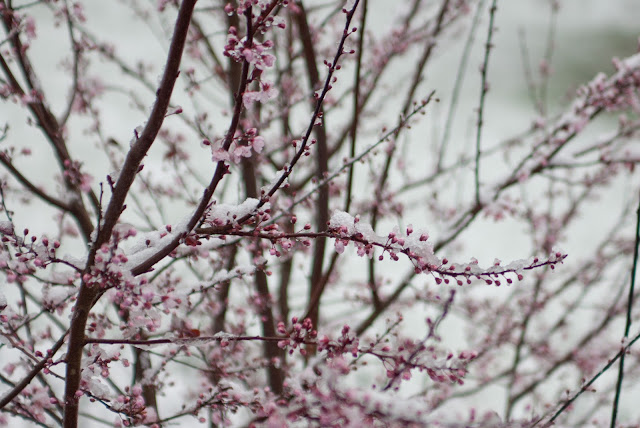 My poor daffodils don't know what to think!  I go out every morning to brush them off so they don't break off. 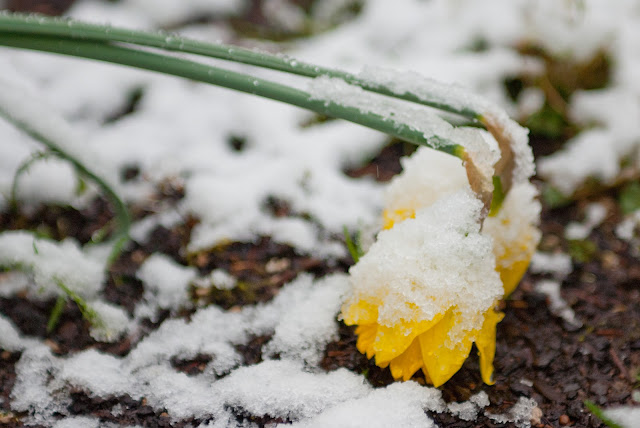 Well, for us here in Oregon, the old saying "March comes in like a lion' held true.  March 1st, we woke up to one of our biggest snowfalls of the year.  So late for snow, but it was still an exciting sight to wake up to! 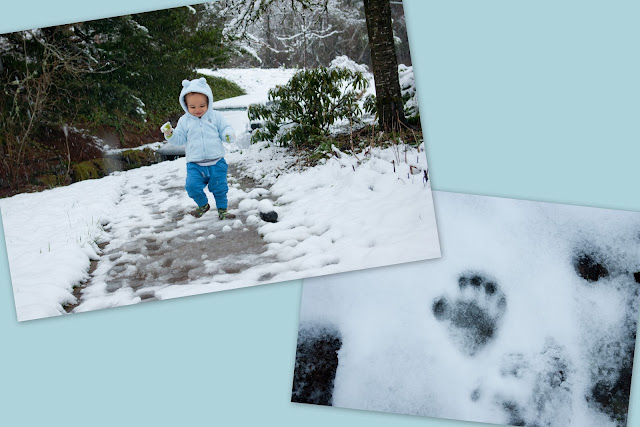 Jessi and Josiah were staying with us for a few days while Ariel was still in the Dominican Republic, so I got the fun of taking pictures with him in the snow.  He just loves to be outside, it does not matter what the weather, but you better prepare yourself, because once he is out, he does not want to come back in.  The snow melted off by afternoon, but the next morning, this was what we woke up to. 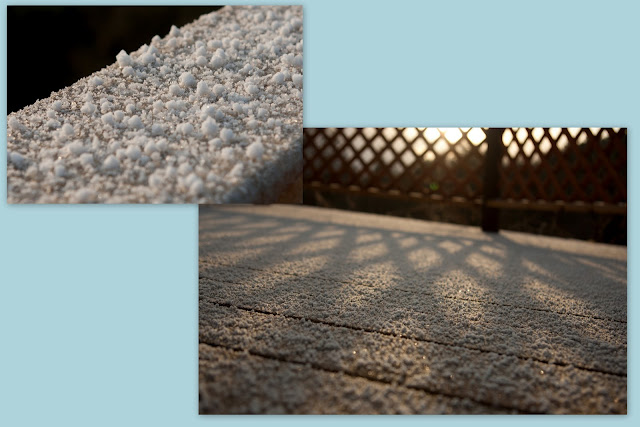 Everything was covered with hail.  It was so pretty with the sun rising, it looked like diamonds sparkling.  I wish I could capture all the glitter in a photo. 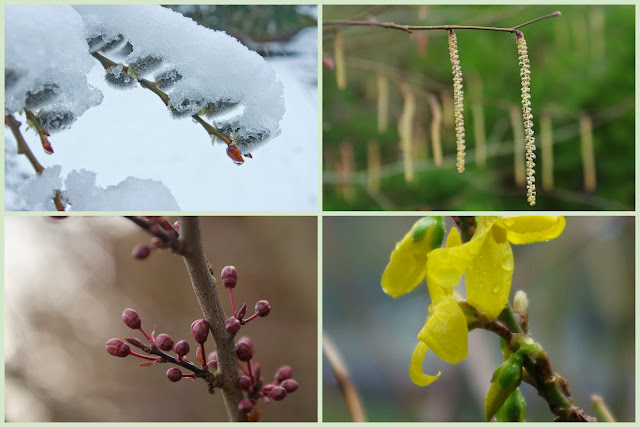 So from snow on the buds to the buds bursting out, we have had quite the start to the month. 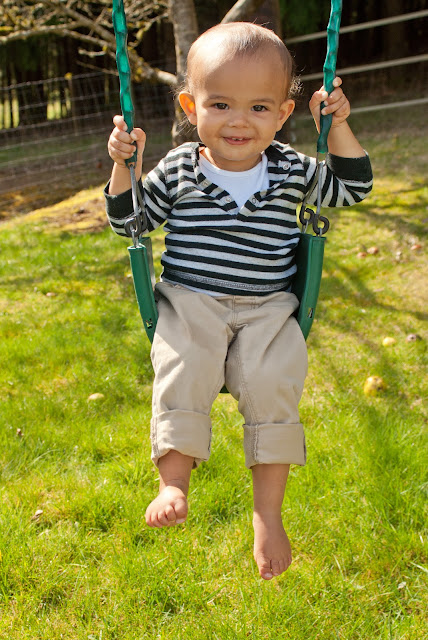 Last week, Josiah came to visit and it was so warm and sunny that he was out there with no shoes or coat on.  What a dramatic change from the first day of the month. 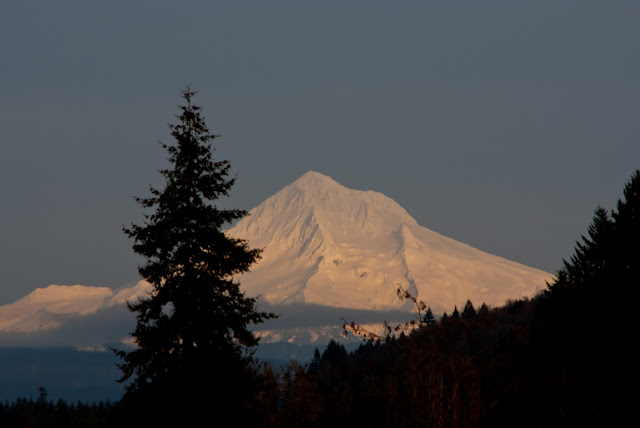