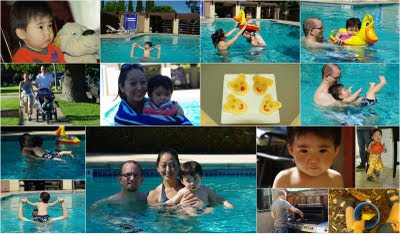 It has been so much fun spending time with Gabriel. I was not sure how it would be to have a grandchild so far away from me, but now I know that even though we don't get to spend time together all the time, like if he lived close-by, the time we do get to spend together is really special. He was a little shy at first, but in just a little while, he was back where we left off at our last visit. I've had a few times so far to spend one on one with him while Dennis and Abby work and the night they went out to celebrate their 11th anniversary. He has changed quite a bit from the first meeting with him, just after arriving from Korea, then he was pretty reserved but now he is just as outgoing as any other kid, running, laughing, eating all kinds of things he had never eaten before, swimming and learning about life. We will all drive up to Oregon on Wed. and the next fun begins....meeting the family he still has not met, aunts, uncles, cousins, older and younger than he is, great aunts, and uncles, and even more family. To add to that, Ariel will be meeting Dennis and Abby for the first time. This is going to be a 4th of July we won't forget.
Posted by Vicki at 11:05 PM No comments: 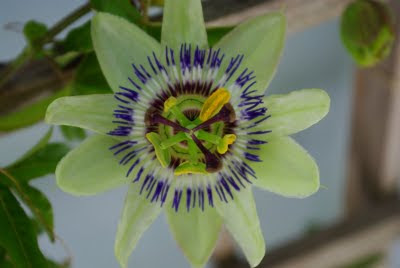 Soooo...since returning from Alabama, life didn't really get back to normal. I came home sick, at first I thought it was just from being tired, but after the second day of headache and fever and wanting to sleep nonstop along with a zillion other symptoms, I knew it was more than that. After 10 days everyone convinced me that I needed to see the doctor. He tested me for West Nile Virus. I was just a hair below the level needed to be diagnosed with it, but he treated me for it anyway. Three weeks later, I was feeling pretty much normal again. I was able to go out and buy my flowers for the yard. I took my good friend Irene with me. We found this gorgeous plant and she was determined to buy for me. It looks perfect on my porch. After getting the yard in order for the summer, I began getting ready to go to visit Dennis and Abby and Gabe, and prepare for them returning back with me, cooking all of the food I could that could be stored in the freezer until everyone got there. All the while Jessi was trying to get herself, Ariel and Josiah prepared for her to go back to work nursing. Her first day back to work, she came home and collapsed with pain. We took her to the ER and they said she had a kidney stone. Two days later, we were back to the ER and they did surgery on her. She is all well now. I managed to finish everything on my list before I flew out, including go out to dinner for my 37th Anniversary. I don't see how it could be 37 years...I feel like that is more like my age, not the amount of years married. 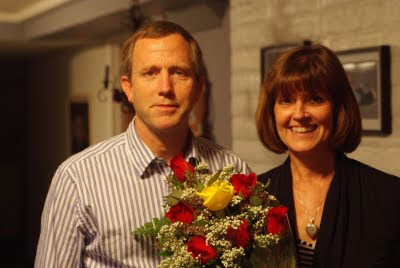 I took 800 photos in Alabama...not all of the tornado, as unreal as the tornado devastation was, there are so many things to take photos of, I could not stop there. At the time when I was taking them, they all seemed so important...I could not take it all in and I thought maybe I could really capture it as I was seeing it. Impossible! There is no way to get the peripheral, the smells, the sounds...all of it together makes those pictures so disappointing when trying to bring it home to share the moment with others.

There was one photo that I didn't take...why is it that the one I didn't take is the one that I think about the most, the one that keeps showing up over and over in my mind since I returned and tried to get life back to normal again.

It was my first day in the field doing casework. I divided my team up to canvas an area completely wiped out, since you could see across the whole area emptied homes and trees, safety was not a problem, so I sent each of us in a different direction to post fliers. As I came to an area that once held a large trailer park, whatever had been left by the tornado had been scooped into piles along the road. There halfway down what used to be the roadway, was a family. I made my way to them. They didn't see me walking up. Their backs were to me as they stood examining what used to be their home. I paused for a moment, so tempted to snap a photo, this was such an intimate moment, so touching, so much a part of why I became a volunteer. To be able to be there to comfort, to do what little I am able to ease some of the hurt that has happened to them. I did not take my camera out, no, that is not why I was there, I was there to help them, not bring home a trophy photo. The mother noticed me finally and turned around. I asked her the usual opening questions and began opening a case for them. I didn't even get past the first few questions before the Mom and I were both in tears. It was such a sad case...I could not help but put myself in that woman's place. There were so many similarities. She and I are the same age. She had her daughter and son-in-law and grandkids living with her. When the storm hit, they took cover in the bath tub as so many other families had done. They had a mattress over them. When it was over, the 5 week old baby boy was injured. He died 3 days later from head trauma. As I tried to put the story down on our form, she handed me a little paper from his funeral. His tiny little eyes looked up at me from the photo, I could hardly make out the details because my eyes were so watered up. He had been buried just the day before. I stopped all the paperwork, dropped my pen and just hugged the crying grandmother. She assured me that they would be OK, that they knew God was in charge of their lives and He would help them put their lives back together again. Eventually, I managed to finish up the casework, gave her the Red Cross supplies and she walked back to her family that was still sorting through the pile. That is when I noticed the bathtub that had held them through the storm. It had a huge X in orange in it, showing that the rescue searchers had been there. I wondered how in the world 3 adults and 2 babies even fit in it...maybe that is part what saved them. The son-in-law pulled out a stuffed animal, he held hit up, looked over at the rest of them and tossed it back into the heap. The Mom had her arm around her daughter, the daughter had her surviving child on her hip and the son-in law reached over and took ahold of his Mother-in-laws' hand. Then they all turned and got into their car and left. I didn't see them put anything into the car. I can't help but think of this family each day. Their silhouetted backs against the devastation. A picture forever in my mind, love, sadness, a family bonded, hope and faith.

The stories are unending...all such great loss. Fear, pain, mourning, some questioning WHY they were still alive when others died, why the home in the middle was fine, but the rest gone. One older man said "Sure I was scared...I'm not afraid of going to Heaven, it is just the getting there that scares me"