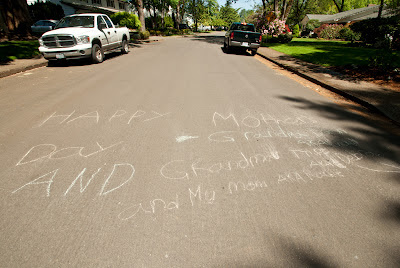 Mother's Day #1
We were invited to Salem for Mother's Day Brunch cooked by Emily, Joshua and John (son). They cooked for Rachel, Rachel's Mother, Debby and Me.  It was a really nice time sitting on the patio chatting with the Tripps and having a special breakfast cooked for us. As we drove up to their house we were greeted by this street chalking written by Joshua.  It says 'Happy Mother's Day Grandma Dixon, aka Vicki and Grandma Tripp, aka Debby and My Mom, aka Rachel.  From their place, we drove back up to Boring to my Parent's place for dinner.  Jessi and Ariel met up with us there. Of course Dennis called and said Happy Mother's Day.  I have gotten used to having long distance celebrations with the kids. 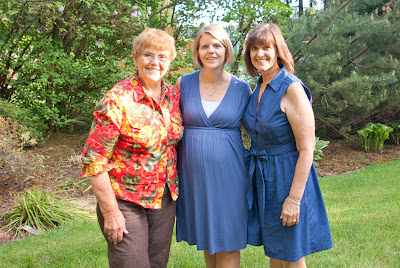 Here is the latest 4 generation Mother/Daughter photo:  Mom, Me, Jessi and Baby Girl.

Mother's Day #2 (unplanned a week later)
Dennis had to be in Seattle for a conference over Memorial Day.  He was pretty well booked up the whole time, so we decided that even though he was close enough for us to drive up, it would not be worth the drive to not even get to spend any amount of time together.  I felt kinda sad about having him so close, but not getting to see him.  Well, Monday morning, as I was putting on my slippers, the phone rang.  It was Dennis saying that he had the day free after all, he had rented a car and was going to drive down!  He made it here before noon!   We made quick phone calls to John and Jessi and Grandma and the Aunts and everyone jumped in their cars and came over in time for dinner. The only thing missing was Abby and Gabe. 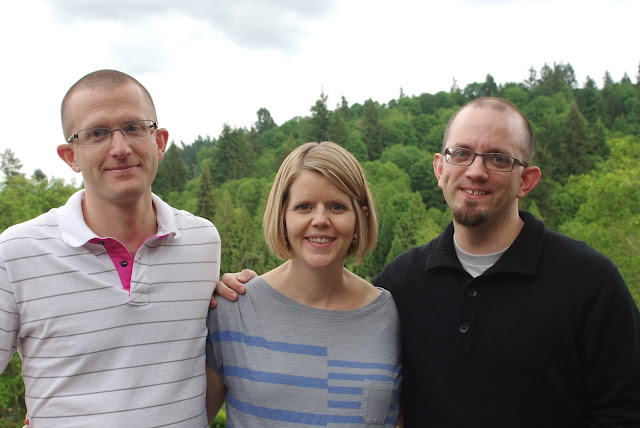 I don't know why it is that Moms love to have all their kids at home at one time.  What is it about that, that gives me such a thrill to see them all three together?  There is just something about it, something that feels so complete, that makes me feel so content.
I can not thank God enough for all the blessings!
3 John verse 4
"I have no greater joy than this, to hear of  my children walking in the Truth." 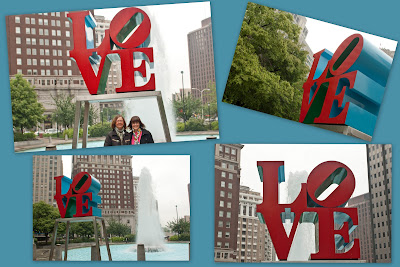 The week before last, I met up with my Swedish friend, Kajsa, in New York.  Since we both have been there before, we decided to go someplace we neither one had been before.  So we hopped on the train and went to Philadelphia!  It has been a couple of years since we have met up, so the train ride gave us the perfect opportunity to catch up on all the things we don't say in emails.
One of the top things on my list was to go to LOVE Park.  I had seen this LOVE decoration so many times and was really wanting to take my own shot of it. I took many, as you can imagine! 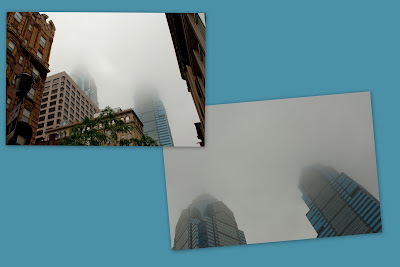 Our first day we woke up to fog.  But that was not a problem.  We hopped on a tour bus and took a ride around town.  So glad it didn't rain, that way we could ride on top and I could get all the shots I wanted.  Below is a shot of us on the bus...it is reflected in a sculpture along the route.  I like how it reflected the city name and that is me in the turquoise and that is Kajsa on the other petal in front walking back towards me.  Pretty tricky self shot, huh? 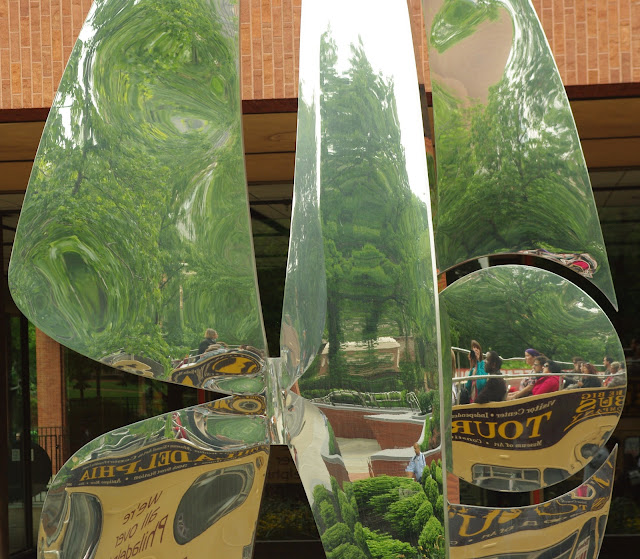 We saw everything I wanted to see from the bus, what a perfect way to see a city.  We stayed on for the whole ride, but if we had wanted to, we could get off and spend time along the way where ever we wanted to and then just hop back on the next bus that comes along.  Here are the famous ROCKY STEPS at the art museum and a statue of a boxer.  This was made famous in the Rocky movies.  Living in this house, we saw a LOT of Rocky...so I had to make sure and get a shot of it.  We also saw the Betsy Ross house, Ben Franklin's place, his grave, the Liberty Bell, Independence Hall, so many things that I have only read about. It is so awesome to actually see them in person. 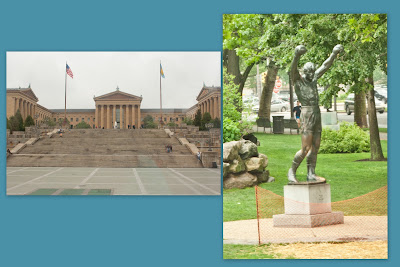 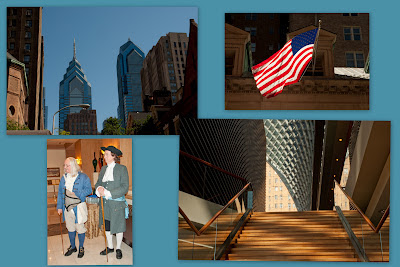 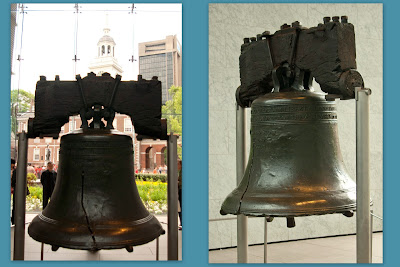 Day two we woke up to clear blue skies.  I really wanted to go inside to see the Liberty Bell up close.  Now that was a real surprise for me.  It was SO SMALL!  I don't know why I expected it to be bigger.  They have it in a building to protect it, but it is situated so nice so that you can see out the huge window towards the tower it once hung in. 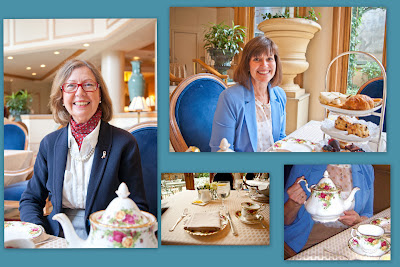 In the afternoon we had High Tea. In the evening we went to hear Chamber music.  That was a first for me...I thought it was going to be a symphony...so was kind of surprised when we sat down and there was only a piano on the stage.  When the pianist and soloist (baritone) came out, I kept waiting for the rest of the musicians to show up.  They never did. It was all sung in German.  The Kimmell Center where it was held is gorgeous!  That is it in the collage...the one with all the curves and shapes and lines.

The next day we headed back on the train to New York.  What a funny thing to step out of our hotel and there on the corner was the LOVE sign!!!  We walked all over taking in the huge buildings, window shopping and enjoyed a cappuccino while we watched people.  We ended up the day at a revolving restaurant overlooking the city as the sun set, lights twinkling over the river all the way to the horizon , so beautiful! 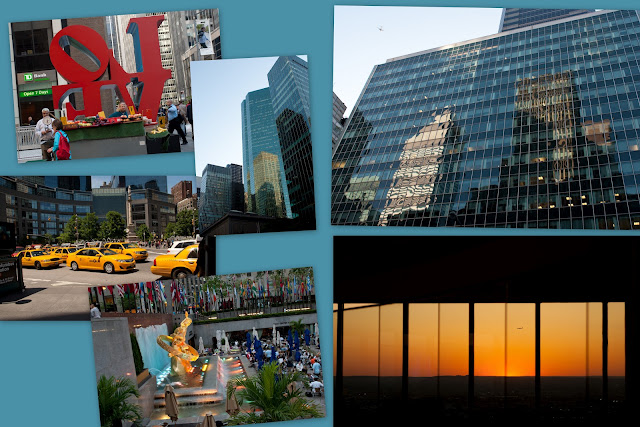 Notice the plane in the sunset and above the skyscrapers?  I could not help but think of 911 each time one flew over. 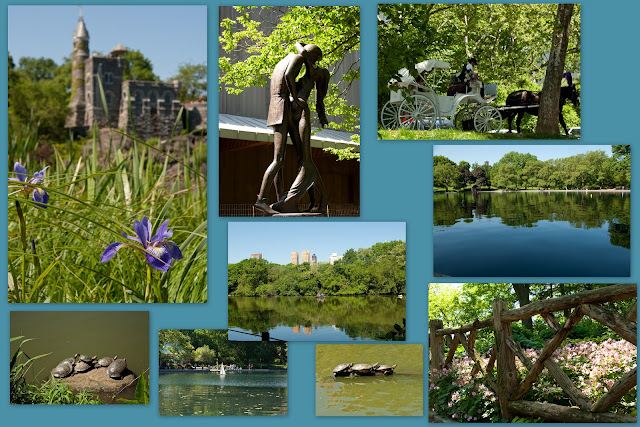 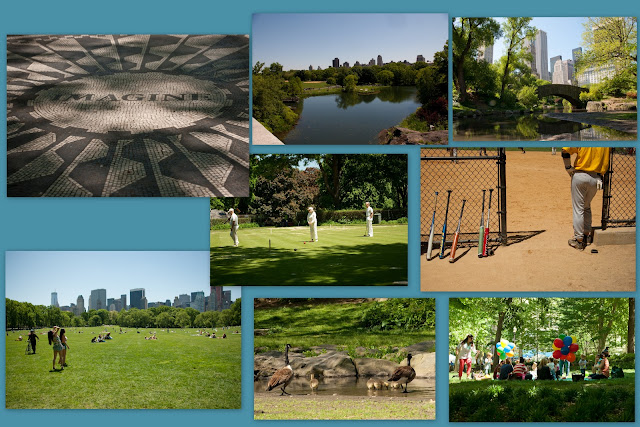 I had only been past Central Park on my last trip there, so I wanted to spend some time walking around to see what was there.  I had NO IDEA!  It is huge!!!  There is not only a ball park, there are many ball parks, and not just baseball, there is a soccer field, basketball, lawn bowling and croquet....and many of each of those too.  There is a huge field for concerts, pools and ponds and waterfalls, sculptures and duck ponds with baby ducks and geese, there is a turtle pond too, but none of them stay in their own ponds, there were turtles in the duck ponds and ducks in the turtle pond.  In on section there is a special place called Strawberry Fields, and it has a memorial (the IMAGINE photo) to John Lennon who was killed just on that edge of the park.  There are gardens of all kinds and people of all kinds doing all kinds of things, running, walking, skating, biking, sitting, eating, sleeping.  When I first arrived there was a half marathon going on...from the center of the park, I could see huge rows of runners on both sides of the park. 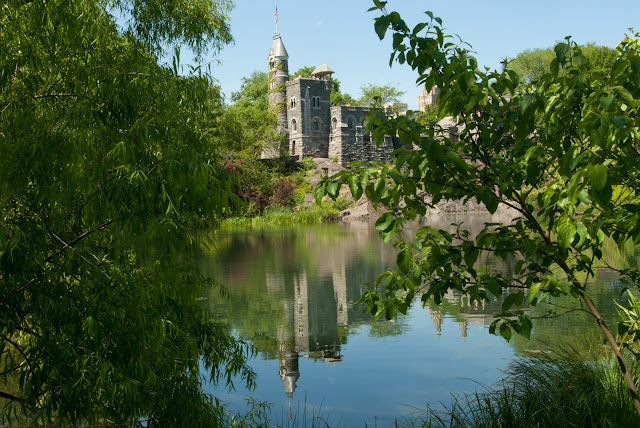 My biggest surprise there was that the park even has it own CASTLE!  A beautiful romantic one, right on a pond and I took full advantage of getting shots of it.  I think I took as many shots of the park that day as I had the whole time in Philadelphia. 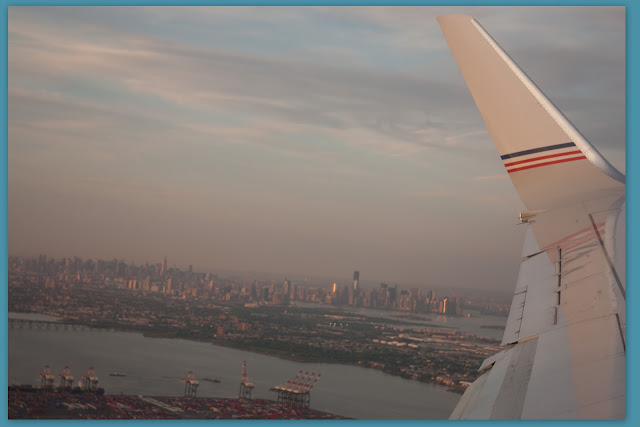 And then it was time to get back home.  Here is a shot from the plane.  You can see the new tower that is almost finished as a memorial to 911. It is going to be the tallest building in New York.  (don't forget that you can click on the pictures to see them bigger) 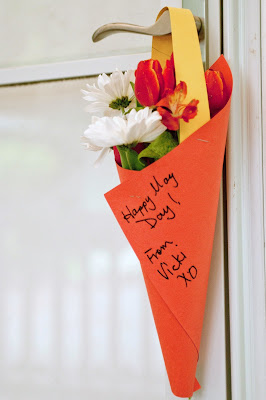 HAPPY MAY DAY!!!
I am not sure why, but an old memory came back to me this week as May got closer.  I remembered how my teachers in grade school would have us make a little basket and fill them with flowers to take home to hang on the door on May 1.  There were all kinds of baskets, all kinds of arrangements.  Some got pretty fancy, using those white paper doilies, some were really simple like the one in the photo.  Most of the time we made tissue paper flowers to go inside them, sometimes we used Kleenex to make the flowers, or there were shredded up crayons melted between wax paper and then cut out in flower shapes.  All included pipe cleaner stems that we got to twist into twirly designs.  One time we grew seeds in the window of the classroom using our little milk carton boxes from lunch.  They had not bloomed out yet, but we put a handle on the box and carried them proudly home.
So this morning, inspired by my memories, I rolled up a few quick cones, stapled on a handle and ran to the store for some flowers...no time to make tissue ones...then I delivered one to my Mom and Dad, my daughter and a close friend, Irene.  I managed to put each one on the door handle and get out of there before they discovered I was there. It was so fun!  Oh, the crazy things we do!!!
Posted by Vicki at 8:27 PM No comments: