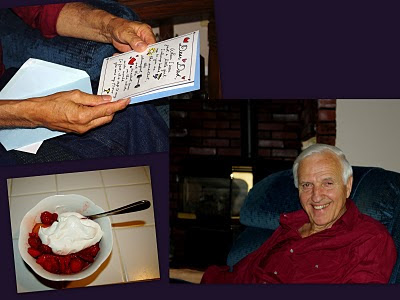 HAPPY FATHER'S DAY!!! Father's Day had a little bit of a different celebration to it this year. John announced to the family that today was his last day of meat cutting and being the dept. manager. No, he is not retiring. Not yet...but he had himself transferred to a different position. Tomorrow morning, he will begin training to take over as the store secretary. Don't laugh, well, OK, laugh all you want!...he is too! He thought he might just be the first and only store secretary, but found out that WINCO has FIVE other male secretaries. It will take a few weeks to pick up his duties, but once he gets it all figured out he thinks he will like doing something different until retirement. For the first time ever, he will have weekends off and will not have to wear long underwear to work in 100 degree weather. On his way out of the store today, he picked up a cheap bottle of champagne to celebrate his news with the family before we had Father's Day dinner at my parents place. 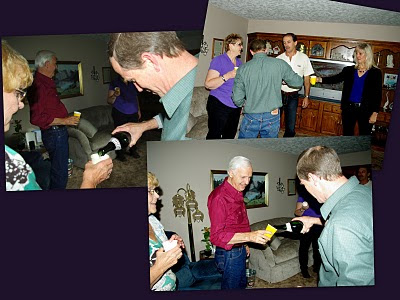 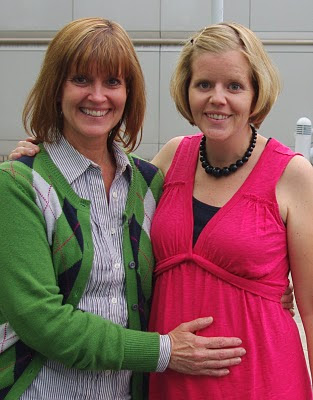 airport again? already? you would think it would get easier, but I always hate having the kids leave. This time, not only my kid, but HER kid! unreal...but God willing, they will all be back in September! 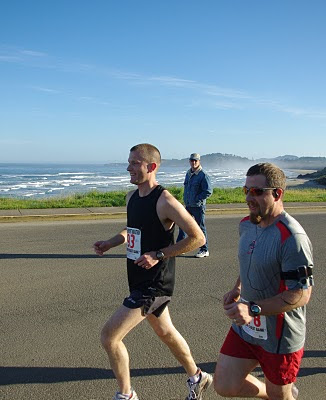 We went to Newport for the weekend. John ran a marathon on Saturday morning. He was really happy with his time: 3:50:40. It has been raining and raining here this spring and it was raining all day on Friday, but Saturday morning, we woke up to beautiful clear skies. A great day for a run. Especially since he was the one that got up at the crack of dawn to run it, while we slept and leisurely got up to sip on lattes. 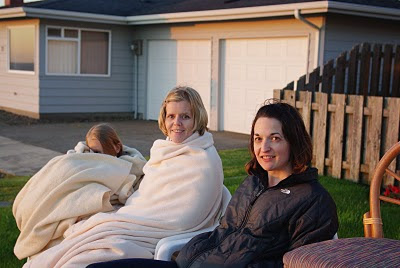 As it turns out, the house we rented was right on the course, and they ran past our house two times at the beginning of the race, so we got to sit there in our lawn and see him run. 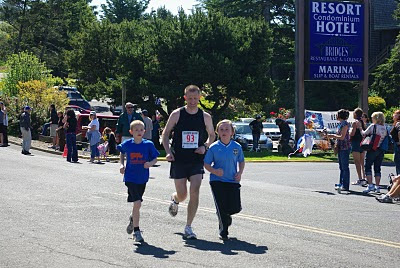 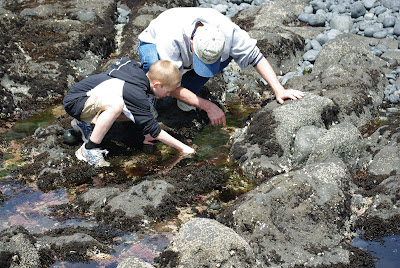 After the race, we went to the tide pools. We always like looking at all the things that live there, but this time, I had an extra bonus. Of course I had my camera and I wandered a ways past where everyone else was congregated, somehow, I didn't even notice some little signs posted that told everyone not to pass....REALLY! I did not see the signs....and so I got all the way to the end of the beach, and I remember thinking, WOW! Why aren't more people down here? I saw some waves crashing up on some rocks, so I climbed up to get some better shots of the waves and on my way up, I noticed on the wall behind me...sea gulls nesting...so cool, I have never seen nesting seagulls. But an even better surprise was in store for me... SEA LIONS!!! Right there ahead of me, there they were laying in the sun...but to make it even better, a BABY! He was in the water and making all kinds of noise trying to get up where his mother was laying. Finally he made it up and started nursing, I took so many pictures. I decided I better get back to the group, since they had not seen me slip away...and there behind me was a park ranger telling me that I was out of bounds and was not supposed to be there! I think that maybe she believed me as we walked back and I showed her how I got to where I was....there really is a way that does not go by those little signs. Oh well, I got great pictures!!! 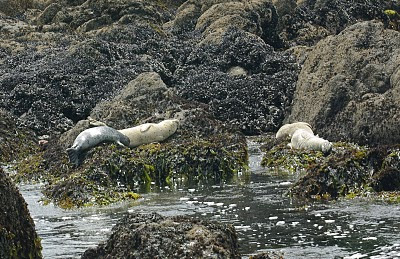 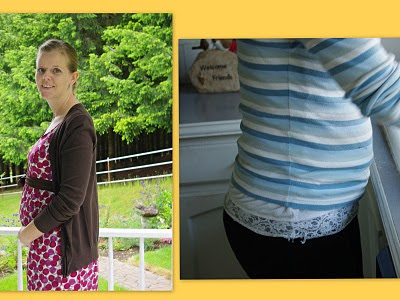 Jessi made it home...of course that was 2 weeks ago...we've been so busy, shopping (she CAN'T go home without maternity clothes, right?), lunching, meeting up with old friends, seeing family, Julie came from Phoenix with her new baby for a weekend and then the next weekend Alan brought his family from New Mexico. I could not wait to see her pregnant belly...which has already grown from her first day here, the blue photo was day one, the dress was a couple of days ago. We went to her midwife for a visit and on Friday get to go see my little grand baby on the ultrasound. 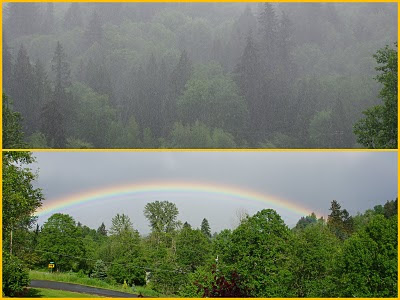 The weather has been record setting wet, but in spite of that, we have had tons of rainbows. In between downpours we have managed to get a few walks in and when it is too rainy we have done her 'Fitmama' workout DVD. It is yoga and salsa dance. I could not believe how pregnant I felt after the first time...my back was aching! 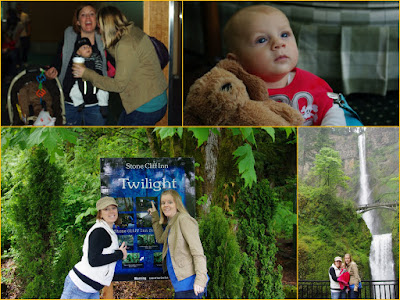 Julie, her college room mate from Phoenix came up for a visit with her newest baby, Drew. He is such a content happy baby to have around. Jessi had not met him yet. It was so much fun to see those girls together again. We drove around to all the local places that they used for filming the 'Twilight' movie. 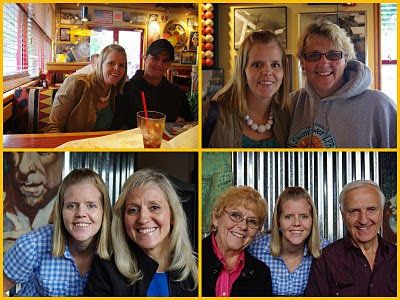 We have had lunch out almost every day, except for the days that we had the flu...oh yuck!...that was horrible, I got it first and thought it was food poisoning, I can not remember the last time I was that sick. Two days later, before I was feeling normal yet, Jessi started throwing up...thankfully, it only lasted a day for her. John started feeling like he might be getting it, but to his relief he made it without getting sick. Alan and Melinda and Makena and Alana (AJ) were due in at noon on Friday, we had to call and let them know we were not doing too well. They decided to get a hotel when they arrived and see how things went. We were so happy that by Saturday morning, we were pretty much back to normal and they came on out and spent the rest of the weekend with us. They have such cute little girls. So with all the little kids and babies around, Jessi and I got a little practice in for when her baby joins us! 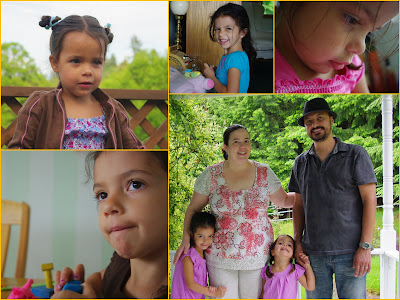 Today, I cut her hair...normally when I cut her hair, it is just a blunt even cut. But today, when we got the highlights in, she decided it would be fun to try to do the haircut on the front of the highlight box. UMMM....that was a bit more than I know how to do, but we decided the worst thing that could happen was that we would have to rush someplace and have them fix my mess. Surprisingly, I am pretty proud of it! Sure, there are some rough spots, but not too bad if I do say so myself. Jessi always has been a pretty brave one! Sometimes the only pictures you get are the ones you take in your mind. Maybe those are the best kind to have. Everyone knows that I love to take pictures. I try to carry my camera with me most of the time, ‘just in case’.

Last week, I knew that it would not be appropriate to take my camera with me. We went to a funeral. I did not even consider taking my camera with me. It is not the place or time to be snapping away at people’s lives like that. But something happened in that short span of time that made such a deep impression on me. It was one of those moments that you take it in and close your eyes and take that mental picture to bring back to mind later on. It has come back to mind many times the past couple of days.

Our close friends Fred and Pat had to say goodbye to their son. It was an unexpected goodbye, it happened suddenly without the physical chance to say goodbye, to let go. That moment was not given to them. He was only 40. He seemed so healthy. He had a 6 year old daughter. And then he was gone from them.

So there we stood last Friday afternoon, huddled together with Fred and Pat and their family, under a small tent and a few umbrellas, trying to stay dry on the outside from the pouring rain, all the while tears flooded their souls. Their daughter read a letter she wrote, full of hope and love and gratitude for the time that they were given with Freddy, a few others shared some thoughts and memories, many cried outloud, the pastor spoke, then another pastor asked us all to join in prayer and THAT is when my ‘picture moment’ came. It was then that Fred, who already had one arm wrapped around Pat, who was also holding Freddy’s daughter…it was then that he reached behind him and grasped on to his daughter’s arm. Sitting in her lap were her own two daughters, her free hand clasped onto her father’s while at the same time both of her girls hands were resting there as well. Right next to them was their other daughter with her husband standing behind her, holding tightly to her shoulders as if he were trying to take the burden of grief from them for her.

I saw this family bound together by this pain that they were feeling, I saw their faith holding them there. Those arms of Fred’s seemed extraordinarily long and I knew that they were not only FRED’S arms, they were the arms of GOD holding Fred as well. Their tears were not of unbearable, un healable pain, not tears of anger or hurt. It was obvious that their faith and hope was on the God who was holding them through all of this. No questions asked, if God allowed them to go through it, then it was what they would do.

I saw a family at their most painful moment, but also at their most closest moment. At the worst moment that we all hope never happens to us, and yet even at their worst, I saw them with the MOST. They showed me love, a family’s love, their love, GOD’s love. Thank you Fred and Pat for allowing me inside your most intimate moment with your family. It is a treasured photo. God bless you! 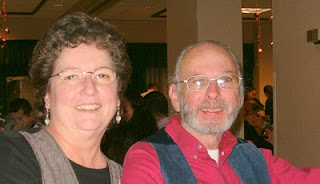