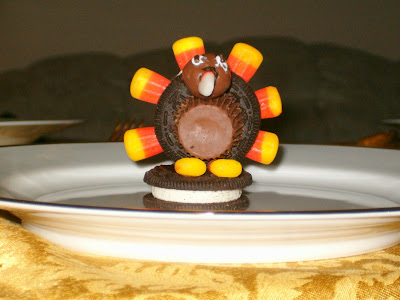 HAPPY BIRTHDAY TO MOM AND MATTHEW!
Before we had the usual Thanksgiving pies for dessert, we celebrated Mom and Matthew's birthday with a cake. 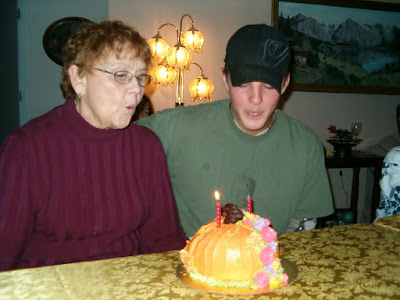 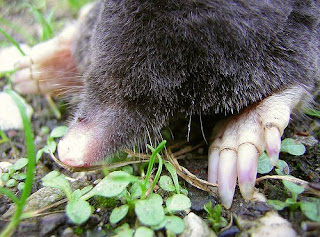 Everyone around here has them. This year they seemed to make bigger hills, instead, they were more like mountains. And there were so many of them! They make such a mess of things. Piles of soil you have to clear off before you can mow, they kill the grass and leave tunnels under the ground that gives way now and then and makes ruts in the ground. When I was in grade school, there were old mole holes in the field where we used to practice for track and I remember once as I was running, my foot got stuck in one and made me fall. Sometimes horses and cattle step in one and end up with broken bones. I’m glad I didn’t break a bone, but I remember how much it hurt. My Grandma used to go out and take all the soil that the moles pushed up and move it to her flower beds. She said it was better soil for her flowers. Sometimes they eat my flower bulbs and the roots off the shrubs which makes the shrub die eventually. (I got the two mole pictures from Flickr because I have never thought of taking a picture of one. Do you see those claws they dig with?) 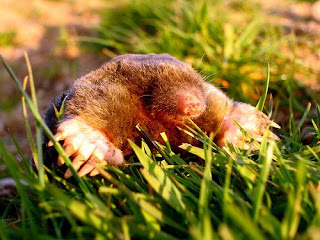 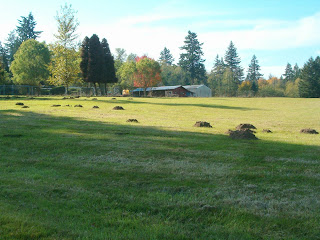 Look how many this guy has! There are tons of ways people have come up with to get rid of them. Like putting a hose down the pile of dirt and turning on the water, pouring gas down, hot pepper, garlic, traps…my Dad used to have a little barrel, he would dig down in the dirt, place a shot gun shell in something, (I am not clear about it all because he never let us girls go near it in case it exploded when he was setting it up) and then he would cover it all with the little barrel. Then later on, we would hear the shot go off and Dad would run out there to see if it got it or not. Whenever us girls saw that barrel, we knew we had to keep way clear of it. Maybe it was not as dangerous as it sounds, but that is how I remember it from being a kid.

The dog we had when we were growing up used to catch moles too. Brownie was his name. He used to dig and dig and dig, the dirt was flying, and sometimes all you could see of him was the tail sticking out of the hole, just wagging and wagging as he dug.

John used to use this kind of trap. 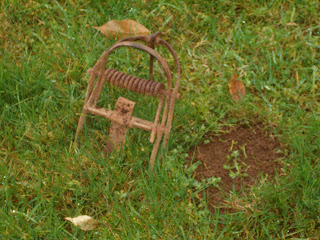 He got a ton of them that way, but then one day I realized he was not using them anymore. He has switched over to using his shotgun. 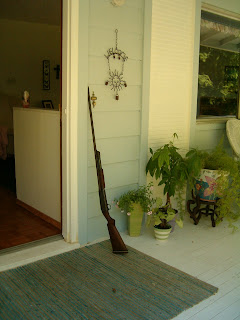 He keeps it ready to go and easy to get to in the summer. You have to be really quiet to shot a mole. You can’t make any movement on the ground when you sneak up on the hill as they are digging. He stands there for sooooo long waiting for them to push the soil up and them “BAM”. They never come all the way out, he just has to wait for the soil to move. Sometimes I don’t even know he is home from work, but then I look out the window and there he is, still in his work clothes, 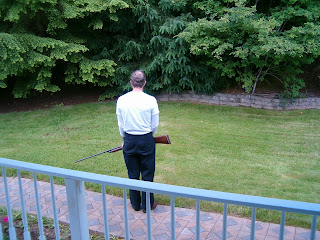 patiently standing there waiting. When we first moved to this house, I used to make fun of the crazy neighbor man…he would be out mowing his field, shotgun beside him then suddenly, he would stop the mower, jump off of it with the motor still running and run over to the molehill, gun in one hand and beer in the other, and wait…and wait…and wait! I can never figure out just what it is that they see when they know it is time to prepare for action (especially while riding a tractor!) I have stood there while John is there waiting…and I never see a thing. I guess you just gotta have that hunter instinct. I wonder if the new neighbors think there is a crazy man living at THIS house now! 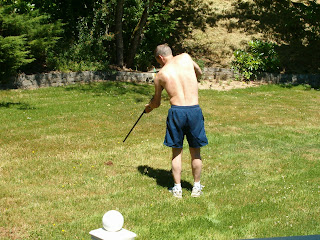 The neighbor dog was up by my house once, just carrying on barking and barking and I heard a funny squeaking noise. When I finally went out there, there he stood with the dead mole in his mouth. I told the neighbor what his dog had done and he said “Sure, he goes to YOUR place and gets them, why not the ones that are HERE?” 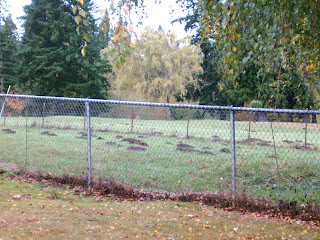 These people decided to fence their moles in. Those little furry moles have really soft black velvet skins…maybe he has decided to cash in on them and make moleskin coats. If that ever took off, Oregonians could be rich! 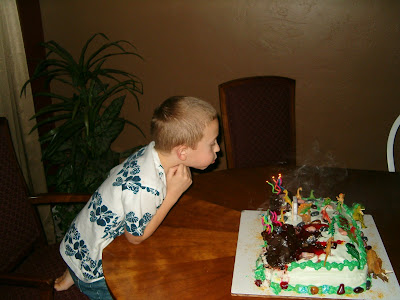 HAPPY BIRTHDAY TO JOSHUA!!!
7 years old last Thursday. We went to his party last night. Great Grandma made him a dinosaur cake with volcanoes this year. 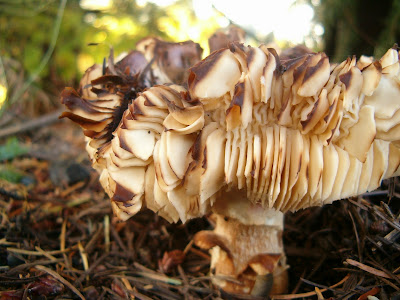 I love the fall. All the colors of the changing leaves, the mushrooms popping up, the last of the summer fruits and vegetables. I don’t like it that there is less daylight and that it rains more. But the cooler temperatures always inspire me to start baking again. After a summer of cold salads and lighter foods, I am ready for some solid warm food again. I pulled the bread machine out and have tried a couple of new recipes…my favorite new bread recipe is a whole wheat with orange peel, cranberries and sunflower seeds. From the Cooking Light magazine, I found a non fat pumpkin muffin recipe, it has cranberries also. They are so good and you just don’t feel quite so guilty when you know they are low calorie. It won’t be long and the snow will start and I can build a fire in the stove, curl up with a good book and a latte and not worry a bit about what needs done outside…it is all taking time off and being lazy like me.

Just down the road is an apple tree not ready to give them up... 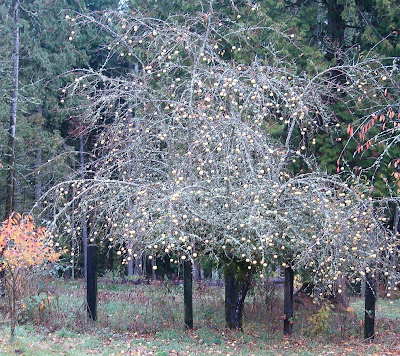 it is holding on to them and looks like it is all decorated up for Christmas. I am sure the birds will appreciate them this winter.

For the past couple of years a tree in my front yard has dropped these really weird looking things. The first time I found one, it was a really small one and I thought it was a brain from some animal. 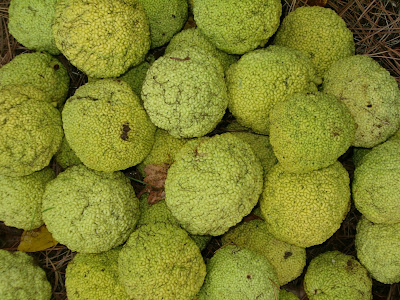 Somebody once told me the name of the tree, but I forgot it. It is nothing I would try to eat...but I wanted to try to dry some, they are so interesting looking I thought they made good decorations, but they rotted. Inside is a huge seed like an avocado. 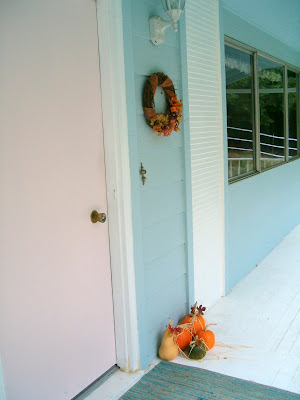 They are the size of a softball. To get a better look click on the picture, it is worth it.

When I was out getting the berry bushes all cleaned up for the winter, the neighbor came over and decorated my front porch and I didn't even hear or see her do it. It was such a surprise to discover it all later on. The trouble was, I had no idea who put it there. I knew it must have happened while I was working because earlier that morning, I had been on the porch and knew it was not there then. After some detective work, I narrowed it down to her and called her to make sure. She thought she was so clever. I'm going to take her some pumpkin muffins...if there are any left, that is.
Posted by Vicki at 10:31 AM 1 comment:

One tree to the other... 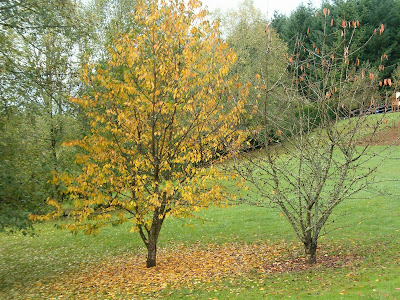 "Yeah, maybe it is thinning in the back a little, but don't worry...it's hardly noticable."

Both are cherry trees, so why didn't they both lose their leaves at the same time?